Everything You Need to Know About Mochitsuki 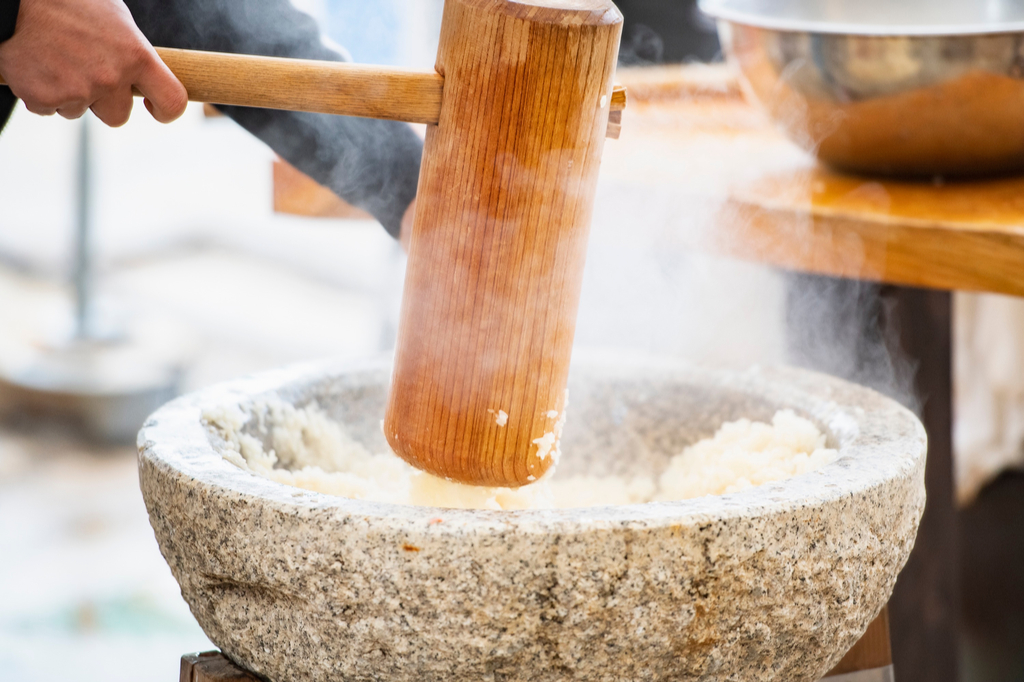 From October to New Year’s, the rice harvest across Japan is in full swing and communities gather together to help each other out. After the hard work of processing rice from paddy to grain, the tradition of mochitsuki (mochi pounding) can begin. Over the course of a few days, the recently harvested rice is mercilessly pounded and transformed into a soft and supple dough that is then enjoyed throughout the holiday season in both sweet and savory dishes.

Winning Over Hearts and Stomachs in the West

In the past 10 years or so, mochi has become a popular dessert in the Western world. It’s been popping up in Insta feeds, appeared on major cooking shows, and can be found in large-chain supermarkets or ordered online through Japanese snack retailers. No longer relegated to the small Asian grocers or requiring a trek to the nearest China/Japan/Koreatown, mochi, in particular daifuku (mochi with a filling) is taking over the Japanese dessert star now that the Japanese Cheesecake craze has finally dwindled.

But what is mochi, and how is it made?

From Rice to Dough

Mochi is the general term for the soft dough made from glutinous rice called mochigome (meaning mochi rice). Commonly referred to as “sticky rice” or “sweet rice”, this type of rice has a higher amount of gluten which gives the dough its elasticity and bouncy texture. The night before production, the rice is rinsed and soaked to soften the grains. In the morning, the soaked rice is placed in square baskets called a seiro, which are stacked up over a kettle or vessel filled with piping hot water, to steam.

Once the rice is thoroughly steamed, it is put in a giant mortar called an usu which can be made of either wood, stone or concrete and the real hard work begins. Teams of 2 or 3 people pound the rice with a wooden mallet called a kine while another person slowly adds water and turns over the dough. They keep working away until the grains are no longer visible and the dough is smooth and shiny.

Ready to discover the fresh taste of mochi? Sakuraco ships traditional sweets & snacks from Japan straight to your door.

To avoid more than one mallet striking the dough at once, verbal cues are used, sometimes something as simple as “one, two, three!”. Striking with the mallet is hard work but also a lot of fun, so it’s common to give everyone a try, even smaller children.

For professional mochi makers, their speed and skill is so impressive that just watching them work is an event. One particular shop in Nara, called Nakatanidou and run by owner Mitsuo Nakatani was made instantly famous when a video of their crazy-fast mochi making went viral.

The video, which now has over 21 million views on YouTube, show two men pounding away to make yomogi (green mugwort mochi) and working at such a blazing speed that a slow-motion recap is necessary. The performative aspect of their process is part of the charm and draw to the shop.

Once the dough has reached the right level of consistency, it is coated with mochiko (mochi flour made from sweet rice powder) to make it easier to handle, and then shaped into bite sized portions. Once the mochi has cooled, it can either be paired with different flavors to be eaten right away, dried to be used later on for ozoni new year’s soup, or placed in sealed plastic bags and frozen for up to 6 months!

Rolling and shaping mochi can get long and repetitive, so traditionally people would sing songs, chat, or even have competitions for who can complete a batch the fastest!

During the shaping process is also when the mochi is softest, so this is the ideal time to add flavors. Filled mochi can either be savory or sweet, with ground pork or sweet azuki bean paste being popular options. But this is the time to get creative! Some families will make a selection of different fillings and even exchange their homemade creations with friends and family.

Making mochi can either be an activity enjoyed with friends and family, or a large community affair. In the latter case, mochitsuki is part of a larger matsuri (festival) to celebrate the Japanese New Year. That means besides mochi making, there are plenty of other seasonal activities, such as theatrical and musical performances, games, writing your first kanji calligraphy of the year, and so much more!

Although mochitsuki used to only take place in Japan, with the Japanese diaspora growing as well as the interest in Japanese culture, mochi-making events are popping up all over the world. While mochi can now easily be made at home with a mochi-making machine, many Japanese culture centers are using the activity to reach out to their communities and to educate people about Japanese culture.

People have been munching away on mochi in Japan for over 1000 years! The food was first introduced from China during the Heian Era (794-1185) and was quickly adopted into Japanese culture. After so many years, Japan has carved out its own unique mochi culture and the food remains a popular staple in everyday life.

Kagami Mochi is a two-tiered mochi decoration with a mandarin on top that is both a decoration and an offering during New Year’s. This is purposely done so that when the mochi is eaten, it is tough, which is believed to keep your teeth and bones strong for the year to come. The word mochi itself means “to hold” or “to have” which is another reference to getting and keeping good fortune in the new year.