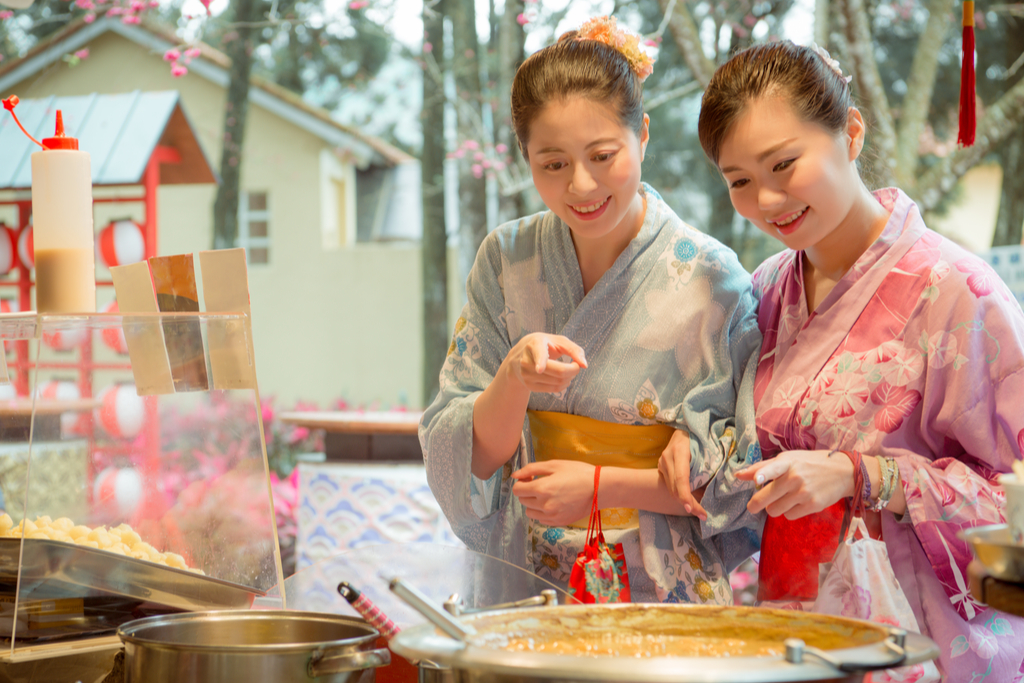 One of the true joys of Tokyo summer is the plethora of matsuri delights you can buy from food stalls (yatai) that seem to spring up everywhere. From the humble local celebrations, to larger events, such as the Sumidagawa Fireworks Festival or the Three Festivals of Edo, there is always something delicious to try. But did you know some of these foods have histories that stretch back more than 400 years?

The Edo Era (1603-1868) was a relatively stable period of 15 different Shoguns for just over 250 years. During this time, the unofficial capital of the county was Edo (modern day Tokyo) and there was a surge in economic growth and opportunity. As a result, working men flocked to the city and the population reached over 1 million in the 17th century. The large population of single men led to the creation of yatai (food stall) culture, and an explosion of standing and eating restaurants. This tradition is what set the groundwork for festival food culture in Japan, and many of the delicacies we enjoy today.

Let’s take a look at our 5 favorite traditional festival foods that first came to be when Tokyo was still called Edo (some even older!).

Kushiyaki means “cooked on a skewer” and usually refers to skewered chicken, vegetables, and seafood grilled over charcoal. Although this style of cooking has existed in Japan for thousands of years, it was during the Edo period that food stalls selling kushiyaki became widely popular. This is not to be confused with yakiniku which also includes beef and pork, both of which were not staples in the Japanese diet until the second half of the 20th century.

Some of the most common kushiyaki you will see are:

Ikayaki (grilled squid): This is an Osaka specialty where the whole squid is sliced thinly, before it is grilled and then seasoned with salt, pepper, soy sauce and a slathering of mayo. The mayonnaise may not be traditional, but the rest certainly is.

Yakitori: In Japan, the skewers of chicken are divided into different parts of the animal. From offal, to skin, to cartilage, you can order a very specific type of meat. Usually, yakitori is marinated in tare, a mix of soy sauce, mirin, sake, and sugar.

Ayuyaki: Translated to “sweetfish” in English, this small seawater fish is grilled whole on a skewer and seasoned simply with salt. Sometimes, a base of straw is set up around a charcoal fire so that the skewers can be set far enough from the embers so that they do not overcook, but still get the smoky flavor.

Mitarashi Dango: Grilled food isn’t just a savory affair, desserts were also cooked on charcoal grills. For mitarashi dango, it consists of 3 to 5 balls of mochi on a skewer, before they are coated in a sweet and salty syrup made with mizuame and soy sauce.

This particular dish is usually reserved for the colder months, but then again, festivals do happen all year round. Oden refers to the broth in which many different kinds of ingredients are stewed for hours on end to absorb the flavor.

Like kushiyaki, this type of food existed for many centuries, but it reached the form recognized today in the Edo Period. It was during that time that the soy sauce broth was introduced and food cart merchants would travel around the city to sell it by the bowl.

When purchasing oden, you pay per stewed ingredient, some of which include daikon, fishcakes, eggs, konnyaku, deep-fried tofu, and many more.

This treat was brought over to Japan from China in the Heian Period (794-1185) but was initially only reserved for offerings to the gods. Eventually, it was enjoyed by the nobility, and finally the masses in the Edo Period.

Mizuame is a syrup made by converting the starch of millet or potatoes into a sugar. The clear liquid is used in a lot of desserts, but the colorful candied fruit on display at festivals are the most eye-catching. Traditional fruits include apples and citrus, but now pineapple, kiwi, and strawberry are also included in the line up.

Mizuame is not only used as a shiny glaze, it can even be transformed into beautiful edible works of art.

You may be surprised to see a European cake on this list, but castella actually has a long history in Japan. It was introduced by Portuguese missionaries in the 16th century when they first arrived in Nagasaki. The cake has a long shelf life, which meant it was an ideal food for sailors to enjoy on their long journeys.

Initially, due to the cost of sugar, this dessert was incredibly expensive. But over time, different recipes emerged using other sweeteners, such as honey, and the idea to cook it on a grill, like taiyaki, or dorayaki, allowed it to be sold around cities from food carts.

Like kudamono ame, kakigori first emerged in the Heian Period, but the difficulty in transporting ice meant it was only commercially viable by the mid 19th century.

To make the chilled dessert, a block of ice would be inserted into a cranked machine and spun around a shaving blade. Afterwards, the shaved ice was coated in a sweet syrup. Although electric ice shavers are much more common nowadays, it is not unusual to see some yatai preparing kakigori the traditional way.

Although not technically traditional since yakisoba was created in the mid-20th century, the history of food cart soba does date back to 18th and 19th century Tokyo. Interestingly, even though municipalities attempted to ban food carts that used fire, for fear of the city burning down, soba merchants were particularly rebellious against the edict.

Soba is a beloved summer food so it was an easy transition into festival food.

Which of these traditional festival foods do you most want to try? Do you have anything similar in your country?