The 3 Great Festivals of Edo: Kanda, Sanno, and Fukagawa 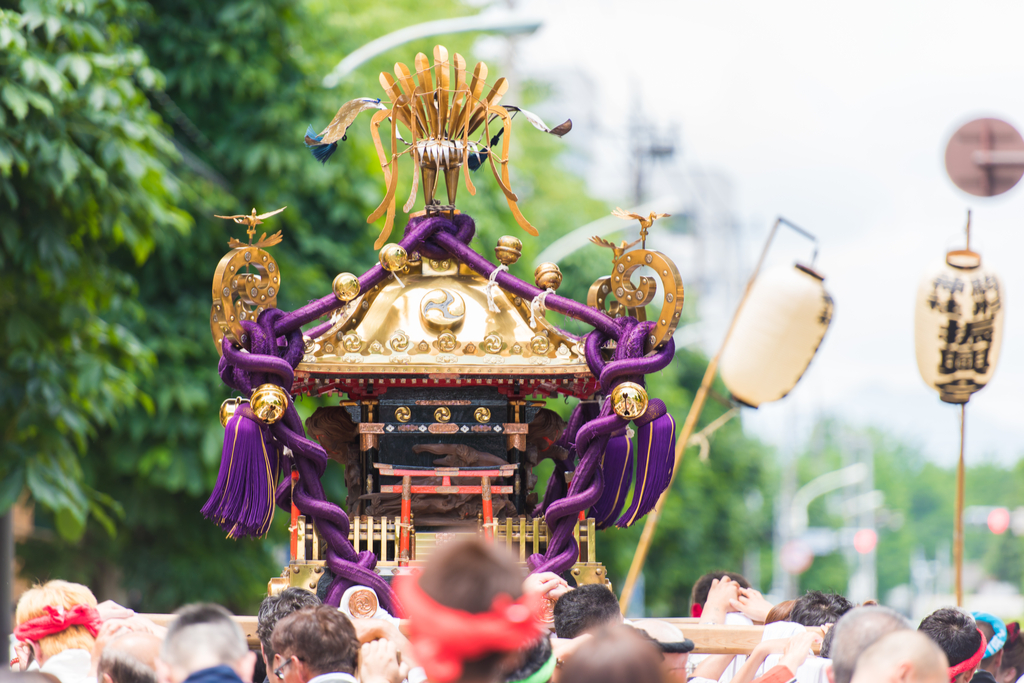 Although the city may have a reputation for long work hours, when festival season arrives, Tokyoites enthusiastically flock to matsuri to meet up with friends, enjoy some good food, and watch the fireworks displays.

Indeed, this tradition has been ongoing for centuries and there are some events that have histories as old as the city itself. The Three Great Festivals of Edo are so named because they were initially held when the city was still called Edo (1603-1868). Year after year, they are highly anticipated events and draw impressive numbers of participants as well as spectators.

Held on odd numbered years in May, in order to alternate with the Sanno Festival, Kanda Festival is a series of events culminating in a day-long procession through the streets of central Tokyo on a Saturday, and parades of communities carrying mikoshi, a portable Shinto shrine, on the Sunday. Each community has a local guardian deity, called an ujigami, which is carried through the streets in order to bless the residents. The festival is tied to the Kanda Myojin Shrine and over the years has come to symbolize a celebration to promote wealth and good fortune for the people.

The event takes place around Kanda Shrine, an important Shinto site in Tokyo throughout the year. The Kanda area was founded even before the Edo period and traditionally was the neighborhood of merchants and traders. The area flourished throughout the 17th and 18th centuries and you can still see Edo-style buildings alongside modern constructions.

The Kanda Festival’s history actually dates all the way back to 1600 when it was established to celebrate the victory of Tokugawa Ieyasu at the Battle of Sekigahara.

The highlight of this festival is the beautiful procession featuring 500 people dressed in traditional court costumes carrying elaborately decorated mikoshi. The parade, which takes 9 hours, winds its way through central Tokyo, starting and ending at Hie Shrine in Akasaka.

Hie Shrine holds particular significance to residents of the city as it enshrines the guardian deity of Tokyo. The shrine itself is believed to predate the foundation of Edo and the gods housed inside have long been associated with the protection of the city.

This festival takes place on even numbered years in June and was also established by the Tokugawa ruling family in the Edo period. The event was initially a way for them to celebrate Edo (Tokyo) as the new political center as well as to demonstrate their power.

The parade begins at Hie Shrine, where at the start of the festival a straw circle, chinowa, is set up. Visitors are welcome to walk through the structure as an act of purification before observing the mikoshi and receiving the good luck it provides. The procession makes its way through the streets before pausing at the Imperial Palace. A very rare honor is granted to the mikoshi bearers as well as a chief priest, who are permitted entry to the grounds in order to perform a religious ceremony blessing the Japanese Royal Family.

Nicknamed the “water splashing festival”, Fukagawa Hachiman Festival is believed to date back to 1642, just over a decade after the shrine was established. The festival earned its colloquial name from the tradition of people throwing water onto the mikoshi. Everyone from local business owners, to firefighters and police officers takes part.

While the festival takes place over 5 days, the main event is the parade, an 8km route starting and ending at Tomioka Hachiman Shrine. The water throwing, which is an act of purification, only starts once the procession has crossed over the Eitai bridge.

The shrine where the festival is hosted is also home to the Gohonsha Ichinomiya Mikoshi, the heaviest in the Kanto region at 4.5 tons, which is lavishly decorated with diamond, sapphires, and rubies. Because this mikoshi is simply too heavy to carry around, the smaller version, called the Ninomiya Mikoshi was created in 1997. Once every 3 years, the Ninomiya Mikoshi features in the procession along with 120 other mini mikoshi.

While small towns are struggling to find participants for local festivals due to the rapidly aging population, Tokyo luckily does not have this issue. There are always more than enough people willing to take part in these three historic events and due to the traffic concerns of the city, participating has become more competitive with the processions being pared down.

Festivals represent so much to Tokyoites: tradition, community, and fun. So one hopes that despite the demographic concerns of Japan, these Three Festivals of Edo will continue for another 400 years.