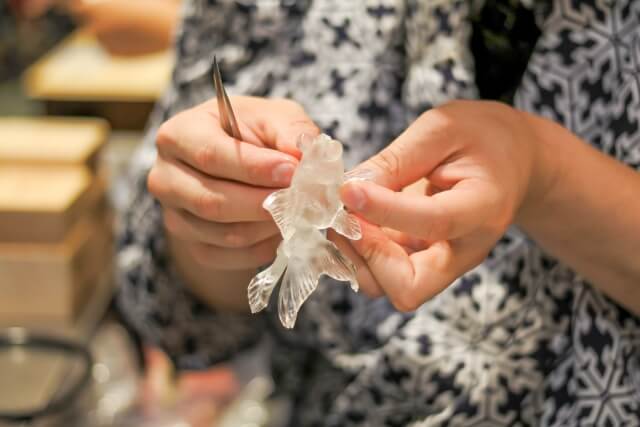 Japan has no shortage of traditional cuisine, arts, and crafts. From traditional Japanese mochi making to famous handicrafts like origami and ikebana, Japan’s rich traditional culture continues to play an important role in the country today.

The word amezaiku is made up of two parts: ame, meaning candy, and saiku, meaning craft or workmanship. Together, they form “candy craft,” a traditional Japanese art whereby intricate, edible sculptures are created out of mizuame, a liquid sweetener made from starch and similar to corn syrup.

In order to craft the mizuame into elaborate shapes, the sweet substance must first be heated to 200° Fahrenheit, at which point it becomes malleable. The mizuame is then affixed to a stick and sculpted using tweezers, scissors, and deft fingers before it cools and hardens again, in approximately five minutes. Finally, the artist uses dyes and food coloring to paint the sculpture and adds in detail and textures, bringing it fully to life. From start to finish, the process can take as long as thirty minutes to complete.

Needless to say, amezaiku is highly skilled work. Given the molten heat of the materials and the initial speed necessitated by cooling, artists require years of extensive training before they can serve customers. Indeed, the art of amezaiku was traditionally passed down through the generations in a master/apprentice model without any official instruction or literature. Part of the challenge is not only creating the sculptures within a limited time period without burning your fingers—but making the whole process entertaining to boot.

Feeling nostalgic for traditional Japanese candy? Step back in time with a subscription to Sakuraco—authentic Japanese snacks, delivered monthly!

Unlike wagashi—which are typically purchased pre-packaged in beautiful wrapping—watching traditional Japanese candy sculptures take shape beneath an artist’s fingers is a key component of the amezaiku experience. As much performance art as confectionery, amezaiku is designed to attract crowds, entertain waiting customers, and entice potential new ones simultaneously. Like watching a balloon artist somehow create animals out of rubber and thin air, amezaiku is three parts wonder at the process and one part beautiful, ephemeral result.

Amezaiku is believed to date back to Japan’s Heian Period, from 794 to 1185. At first, the art form was imported from China as a practice of making sugar sculptures for use as religious offerings at temples around Kyoto. These early creations were simple in design, painted in plain red and white dyes, and largely confined to a religious context.

It wasn’t until the Edo Period, beginning in 1603, that amezaiku became readily available to the wider Japanese populace, when it became an important part of the Edo Period’s flourishing street culture. Amezaiku artists in this time often played a dual role as street performers, traveling from town to town and festival to festival, doing magic tricks and telling stories while plying their craft to passersby. It was during this period that Amezaiku sculptures took on the elaborate shapes and colors they are best known for today, including such classics as cranes, dragons, and the various animal shapes of the Chinese zodiac.

In the Edo Period, amezaiku artisans used a technique similar to glass blowing to shape their creations, inflating their sculptures by breathing air into them through a small straw. However, as hygiene restrictions became stricter, amezaiku gradually fell from fashion and the tradition faded into relative obscurity. Once a bustling industry and thriving traditional Japanese craft, the art form of amezaiku is now dangerously close to extinction, with fewer than 100 craftsmen believed to be working in Japan today.

Luckily, despite dwindling numbers of practitioners, it’s still possible to find amezaiku artists making a living from their art. Recent years in particular have seen a resurgence in efforts to preserve the craft, with initiatives like Amezaiku Ameshin, a collective of amezaiku artisans based in Tokyo. The group, founded by amezaiku craftsman Shinri Tezuka, is dedicated to reviving amezaiku candy art by innovating on the tradition while also training new artisans in the craft. The group has a studio in Taito, where you can buy a selection of candy art and attend hands-on amezaiku workshops, as well as a shop in Tokyo Skytree Town where a more complete range of candy designs can be found.

Amezaiku is a treat for the eyes, as well as the stomach. This traditional Japanese candy art has been delighting children and adults alike since Japan’s Heian Period, and despite a modern decline, continues on to this day. With its long history and devoted community of artisans, it’s no surprise that amezaiku has proven so resilient.