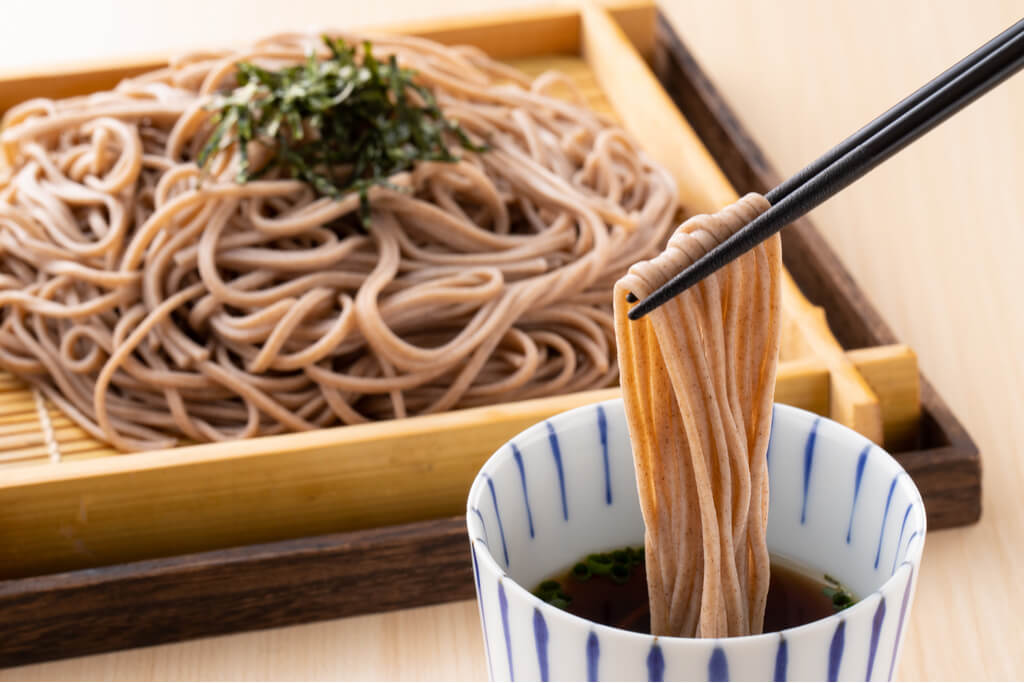 In the first part of our Soba Dish Chronicles, we looked at the different types of soba dishes. In this article, we’re going to explore Japanese cold soba dishes and see what makes the difference.

What is Cold Soba?

Cold soba is a spin on the traditional soba dish, using cold broth or chilled noodles as the main way to set itself apart from its warmer counterpart. It is usually eaten in the summer as a refreshing meal, although it is available year-round. In the summer, it is common to serve cold soba with ice cubes in the broth to chill the noodles.

One of the main differences between cold and hot soba lies in the tsuyu (noodle soup). The flavors in the tsuyu used for cold soba are stronger and richer to make up for the milder fragrance of the cold noodles.

Like its hotter counterpart, cold zaru soba is dish of noodles served on a bamboo tray (zaru). Soba noodles are boiled to the perfect texture before being drained and rinsed under running cold water to remove excess starch. The noodles are then transferred to an ice bath, typically a larger container with cold water and ice cubes, to chill the noodles before serving.

Once the noodles are chilled, they are moved to a zaru, garnished with seaweed, and served alongside a cold soup broth.

Looking for a taste of Japan or something to snack on after a soba lunch? Check out Sakuraco! Sakuraco sends authentic Japanese snacks, sweets, teas, and even tableware, straight to your door all the way from local makers in Japan!

The hot version of tsukimi soba uses a raw egg and the heat of the broth to poach an egg topping. Even though Japanese eggs are delicious and gaining an international reputation for being able to be served raw, cold tsukimi soba uses hot spring eggs (onsen tamago) instead.

What sets an onsen tamago apart from a poached egg are the soft and silky whites of the egg and the firm but creamy texture of the uncooked yolk. People may also call this hiyashi tsukimi soba (cold tsukimi soba).

With a variety of tempura (deep-fried fish and vegetables) served beside chilled zaru soba and cold soup broth, tenzaru soba is the perfect meal for those looking for a summer refresher with a crisp bite!

Yamaimo can be eaten raw and has a gooey texture when grated. However, it is chock full of nutrients like potassium, vitamins, minerals, and enzymes that help with digestion.

Like hot tororo soba, chilled tororo soba is often topped with a raw quail egg. Chopped shiso leaves or green onions are commonly used as toppings for this dish.

While sansai soba (soba topped with wild vegetables) is most popular in the winter, a cold version can be enjoyed during the summer months using sansai vegetables. Sansai refers to a mix of wild mountain vegetables often used in vegetarian Buddhist cuisine, making this soba a part of Japanese traditional Buddhist cuisine (shojin ryori).

The vegetables, sometimes including Japanese seasonal vegetables, are crisp and refreshing when prepared properly.

Oroshi soba was originally a regional dish from Fukui Prefecture, called Echizen Oroshi Soba after the region that is now Fukui. The main difference in the preparation resides in the tsuyu soup where grated daikon is added directly into the tsuyu. The mixture is then poured over the chilled soba noodles.

Perhaps one of the most famous cold soba noodle dishes, cha soba are soba noodles infused with green tea (ocha or cha). During the manufacturing process, a ratio of buckwheat flour, wheat flour, and green tea powder are mixed to create a dough which is then cut into thin soba noodles.

The noodles take on a light green color similar to green tea, instead of the brownish-gray of regular soba noodles. The green tea adds a subtle flavor that is only enhanced during the summer season. Cha soba can be enjoyed zaru-style or bukkake-style and with a variety of toppings.

Also known as cold meat soba, this soba dish is a speciality of Kahoku Town in Yamagata Prefecture. It may be called “cold meat soba,” but the dish is actually served at room temperature. The ramen version of this dish is called Niku Chuuka.

The main ingredients of this dish are chicken, green onions, and soup stock made from chicken bones. The chickens used must be older with tougher meat. While it is not clear how this dish was conceived, there are several theories:

Koro is a noodle dish from Nagoya in Aichi Prefecture. Chilled soba noodles are placed into a bowl and served with a cold soup broth called koro. The soup is seasoned with mirin and tamari soy sauce (soy sauce made with miso) and is known for its strong aroma even when it is cold.

Koro soba seems to have originated at an udon restaurant in Nagoya before the war and was called koryu kake. The store was destroyed during the Second World War but reopened in Tajimi City once the war ended. The cold noodle dish grew to national popularity, and a soba variation was born.

And these are just some of the cold soba dishes that Japan has to offer! There are many more waiting for you to discover!

Have you ever tried cold soba before? What was your favorite style? Let us know in the comments below!