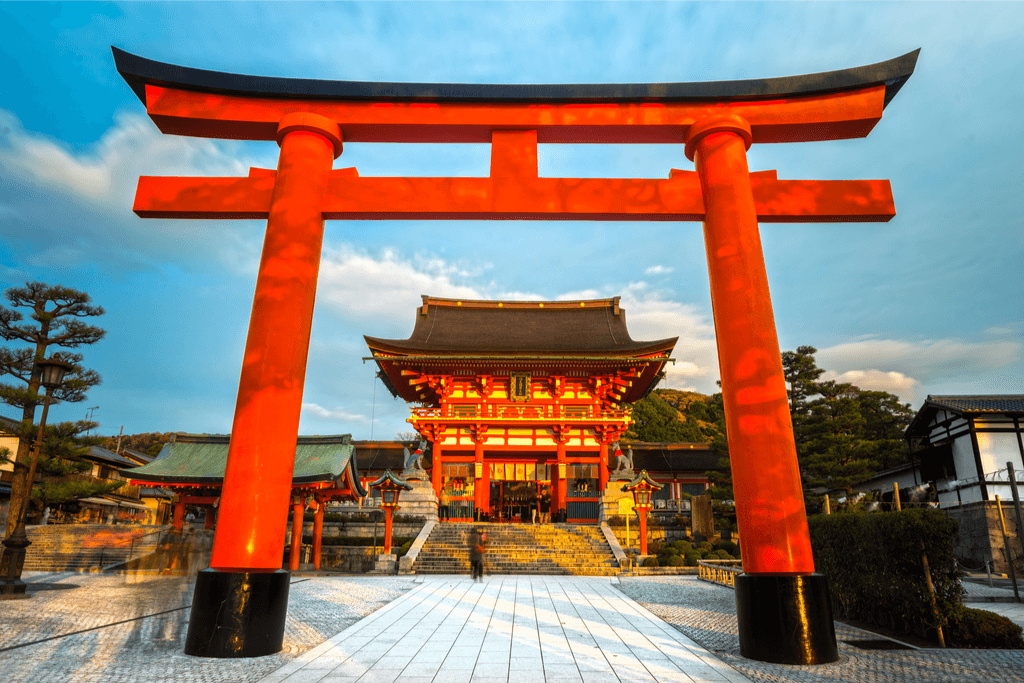 Shinto in Japan, also known as Shintoism, is an indigenous folk religion. It bases itself on beliefs in the supernatural and nature itself. Its ideas of purity, respect for the cycle of life, and “the way of the Gods” underline every aspect of traditional and modern Japanese culture.

Shinto  (しんとう、神道)  means “the way of God” (kami no michi) in Japanese. Shinto did not have an official name until Korea introduced Japan to Buddhism in the 6th century. People found it necessary to name Shinto to distinguish the two religions from each other. Before that, the Japanese followed the rituals and beliefs they took for granted.

Up to now, Japanese Shinto has more than 100 million followers and more than 9,000 shrines and has become an essential religion in Japan. Shinto is not a religion in its own right but rather an integration of beliefs and rituals that worship the gods – the kami.

How is Shinto Different From Others?

No one knows who created Shinto, and there are no central figures such as Islam’s Prophet Muhammad, Buddhism’s Siddhartha Gautama, or Christianity’s Jesus. Therefore, Shinto is “polytheistic,” – meaning there are many gods.

Gods in Shinto are kami (神). Kami represents sacred objects in nature. For example, the sun, moon, wind, thunder, and other natural elements can all be kami. People also revere the spirits of the dead (the emperor’s ancestors, the family’s ancestors, and heroes of service to the country).

Another difference between Shinto and other religions is that it doesn’t have an official sacred scripture or a bible. It only has a loose collection of prayers and rituals. Most people know them as the ancient prayers of Norito or Norii,

Shinto leaders passed these prayers down through centuries, then eventually recorded them on paper. Generally speaking, the guardians of the Divine Shrine are the ones who memorize the prayers. Then they send them to the gods during the annual matsuri (festival).

Are you interested in exploring Japanese culture in the comfort of your own house? Check out Sakuraco! Sakuraco sends traditional Japanese sweets, snacks, and tableware from across Japan to your door so you can have the experience at your most convenient!

Shintoism in the Life of Japanese People

Like many other religions, Japanese Shinto is an essential factor in the milestone events of a person’s life from birth to adulthood, marriage, and death.

Miyamairi (宮参り) is a traditional Shinto rite of passage in Japan for newborns. About a month after birth, parents will take the child to a local shrine to express gratitude to the deities for the baby’s delivery and have a shrine priest pray for the child’s health and happiness. Miyamairi marks the connection and attachment between humans and gods since birth.

According to Shinto tradition, March 3rd every year is Girls’ Day or Hinamatsuri. On this holiday, girls display dolls on an ornate platform and invite friends to sit, watch dolls and drink tea. In an old tradition, this was a day of purification as people made paper dolls, rubbed them on their bodies to remove bad luck, then took these dolls away and threw them into the sea.

Boy’s Day (Tango no Sekku), better known as Children’s Day (Kodomo no Hi), is on May 5th. People will display old samurai dolls or armor outside the door on this day to ward off evil. The boys usually wear the traditional costumes worn by the samurai of the past. It’s a symbol of strength and courage. They also hang a carp kite, a symbol of vitality and strength.

Today, people rarely celebrate girls’ and boys’ days in solely religious contexts. However, they are still special days for young children, and is also a day for families to gather and spend time together. Moreover, since the end of World War II, Children’s Day has been a holiday for both boys and girls.

Shichi-go-san (7-5-3) is a day to bless children on November 15th. Girls at the age of three (3) and seven (7) and boys at the age of five (5) will wear traditional Japanese clothing such as kimono and hakama, a type of fancy kimono to visit shrines. The children will pray to the gods for health and prosperity as they grow.

The coming-of-age ceremony (Seijin no Hi) is generally on the 2nd Monday of January. It is the celebration of young men and women turning 20 years old in that year, marking their adulthood. In the countryside, young men turning 20 carry the palanquin in parades at festivals.

Many couples also choose this traditional wedding in shrines instead of holding a Western style.

In Japan, October is the wedding season. Brides to wear a European-style dress wear a traditional wedding kimono called shiromuku. The grooms can wear conventional men’s kimono and hakama, or more common today, the suit.

Like many other Shinto rituals in Japan, a traditional wedding ceremony has a purification ritual beforehand. The celebrant will offer rice and salt, and other sacrifices in front of the altar before praying to the gods.

After the offering, all wedding attendants stand up to listen to the blessings of the newlyweds. Next is the san san kudo (三々九度) ceremony, in which the bride and groom drink sake together. This segment is one of the oldest rituals of a Shinto wedding, dating back to the 8th century.

In ancient Shintoism, there was no funeral because most Japanese people are “born Shinto and die Buddhist”. Because of this, they usually choose Buddhist rituals to organize funerals. However, most of these funeral rites are a blend of both Buddhist and Shinto customs.

The funeral ceremony marks a new life for the deceased. They officially become the “ancestor” of the next generation and continue the will of the Gods. According to tradition, their main job in the afterlife is to continue to bless and protect their future descendants.

When someone in the house dies, family members and relatives often gather in the place, light candles, and burn incense throughout the night. The next day, the family will hold the funeral at home or the nearest temple.

Usually, people will undertake the funeral process depending on the financial situation of the family and the wishes of the deceased. A funeral includes a prayer for the departed soul and a party for attendees to say goodbye to the deceased.

Have you ever visited a Japanese Shinto shrine or celebrated any Shinto traditions? Let us know in the comments below!