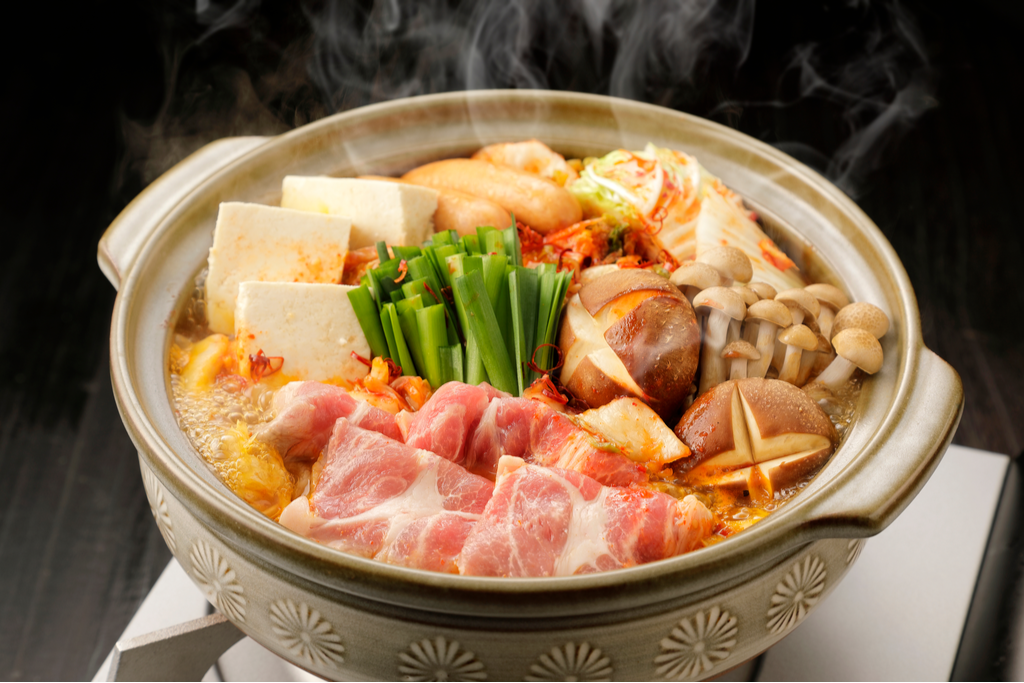 Spring is around the corner, but sometimes colder weather overstays its welcome. While there is no shortage of warming soup dishes in Japanese cuisine, there is an obvious choice for when you really need food to warm the soul: nabe, the Japanese hotpot.

Nabemono, or nabe for short, is a collective term for any kind of Japanese hot pot meal. With a history as old as that of earthenware pots, nabe has been a Japanese staple food for well over a thousand years.

Traditional Japanese houses used to feature sunken fireplaces in their center, where family prepare meals. The practice of keeping broth boiling in big iron pots, while adding ingredients to it is where Japanese hot pot culture first started.

How to Eat and Ingredients

As a one-pot meal, nabe is a meal people usually meet in a communal setting. Small, portable burners are at the center of the table and people add fresh ingredients to the boiling broth and cook them on the spot.

Red meat was not a common part of Japanese cuisine until a few hundred years ago, so early nabe would have contained mostly fish and vegetables. Nowadays there are no rules for what goes and doesn’t go into a nabe however, potluck parties are quite popular. Chicken and beef are occasionally used as well.

Nabe tends to be rich in flavor and therefore usually doesn’t use condiments. A sweet and sour base of soy sauce and citrus, or ponzu, are the most common options.

Since the broth of the hot pot absorbs the flavors of the ingredients, many people add thick udon noodles or rice to it at the end of the meal to finish.

Thanks to its simple basic formula, there is no shortage of different styles and regional types of nabe. Let’s take a look at some different ones:

Yose nabe has a simple approach, with an “anything-goes” concept. The concept is in the name, which is derived from the verb yoseru – to gather or collect. To rephrase it, different ingredients are gathered to be cooked in one pot, starting with a simple soy sauce or miso broth.

Any combination of meat or vegetables can be added, but chicken, prawns, white fish, and clams are most popular for meat, while Chinese cabbage, mushrooms, leek, and spinach are common for vegetables. Also present in almost any kind of nabe, are blocks of both firm and soft tofu.

Packed with protein, this type of nabe is famous for being a sumo wrestler staple. Eaten in large quantities in order to gain weight, it usually comes in big portions, even when served to non-wrestlers.

As with yose nabe, there is no standard recipe, but the standard soup is usually a clear dashi or chicken stick. For ingredients, you can expect large amounts of quartered, skin-on chicken, fish, tofu and vegetables.

Sumo wrestlers live, eat and train together in so-called stables, each of which will have their signature chanko nabe recipe. It is also fairly common for wrestlers to use their status to open up their own chanko nabe restaurant once they retire from the sport.

A special kind of nabe hailing from the northern prefecture of Akita. Besides featuring a local breed of chicken and seasonal mountain vegetables like burdock root, the unique ingredient is roasted rice balls. Using boiled and pounded glutinous rice, cylindrical rice cakes are formed on skewers which are then roasted over an open fire. After cutting them into smaller pieces, these so-called kiritanpo are then added to the broth.

This dish was popular with hunters, who carried kiritanpo with them in winter as non-perishable food.

Made in a flat iron pot rather than an earthenware one, sukiyaki is a slightly different type of nabemono. Its roots are in Japan’s Meiji era (1868 – 1912) when the West heavily influenced Japan.

Unlike traditional nabemono which contains white meat, sukiyaki’s main ingredient is thin strips of beef. Diners dip them into a broth made of soy sauce, sugar, and cooking sake. Addtional ingredientsusually include mushrooms, green onion, and tofu.

A nabemono that has its origins in central Japan’s Kansai region. The main ingredient is as unique as it is deadly: thin strips of the poisonous fugu pufferfish.

Fugu is not something you want to prepare by yourself as not slicing the meat correctly actually poses serious health risks. Chefs need to have special training and certification before they can prepare it. Simmered together with vegetables, however, it is actually quite delicious and a true winter specialty.

Created in Fukuoka, on Japan’s southern island of Kyushu, motsu nabe is now available nationwide. It tends to be less popular with most western visitors to Japan, as the main ingredient is pork or beef tripe. While cooks make sure to thoroughly clean and blanch the giblets, the dish is an acquired taste even for many Japanese people.

The broth tends to be soy or miso, with many bold flavors like garlic and chili peppers complimenting the flavors of the meat. Vegetable ingredients tend to be simple, with cabbage and chives the standard.

These five variants are only a fraction of different nabe dishes available, with many many more regional varieties in existence. Have you tried any of them or would you like to on your next trip? Let us know in the comments below!