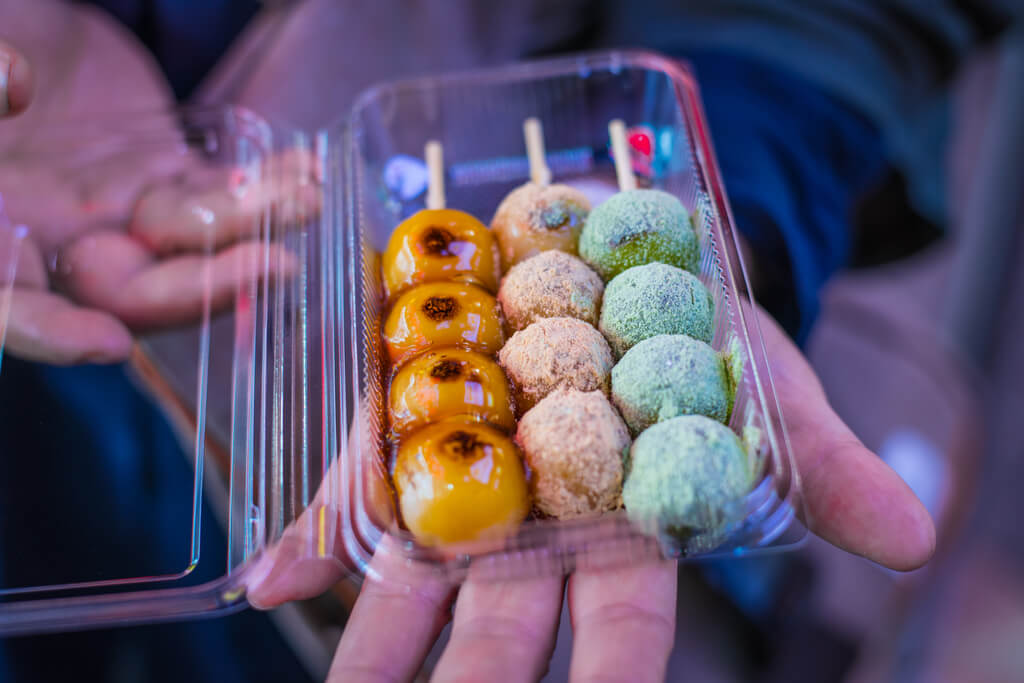 Mitarashi dango (みたらし団子), the traditional Japanese skewered dessert similar to mochi, has become a popular treat enjoyed across the globe. Consisting of three to five small, round rice dumplings (dango), this famous wagashi (和菓子) is known for its delectable sweet soy sauce glaze.

The dumplings are first boiled and then often grilled for an added char, before being covered in the saucy syrup. The result: deliciously chewy dumplings covered in a dark, flavor-packed glaze that is simultaneously sweet, savory, and salty.

Mitarashi dango is said to have originated at the renowned Kamo Mitarashi Tea House. The tea house, or chaya, which was established in 1922, is located in the Sakyō ward of Kyoto, just outside the entrance to the Shimogamo Jinja, a UNESCO World Heritage Site. The use of the word ‘Mitarashi’ in the name of this dessert is thought to be inspired by the bubbles of the Mitarashi Pond, the purifying water located outside the entrance to the shrine. It is thought that this influenced the shape of the dumplings, which actually look like little bubbles.

It is also said that Mitarashi dango is inspired by the moment when Emperor Go-Daigo, the 96th Emperor of Japan who reigned in the 1300s, visited the Shimogamo Jinja and saw five bubbles appear while he was purifying his hands in the water. According to Kyoto-based Camellia Tea Ceremony, headed up by director Atsuko Mori, the sight of the bubbles, which were deemed to represent the human body (a head with arms and legs), were seen as a good sign, and the emperor offered five rice dumplings, one small and four big, to the gods of the shrine, a tradition which then continued.

Ready to discover Japan’s best kept culinary secrets? Sakuraco is shipping traditional Japanese sweets and snacks across the globe straight from Japan to your door.

This could be the reason why the Mitarashi dango at the Kamo Mitarashi Chaya are served in a particular way. Consisting of five dumplings on a skewer, the fifth dumpling is placed on the skewer separate from the other four, with the fifth representing the head, and the remaining four representing the arms and legs. The dango skewers are then covered in the fragrant, traditional glaze, which at Kamo Mitarashi Chaya, is made with brown sugar.

While the Kamo Mitarashi Chaya is famous for its Mitarashi dango, this favorite Japanese sweet can be found in numerous variations and locations across Japan and beyond. You can also make your own version of this dessert at home. There are loads of easy-to-follow recipes available online. You can choose to follow the traditional method, using the regular ingredients, add silken tofu for extra chewiness, or create interesting shapes with the dumplings themselves (there are even panda versions for you to try!).

In fact, Mitarashi dango is just one variation of many types of dango available in Japan. Popular varieties include Goma dango, which is covered in sesame seeds, and the Sanshoku or Hanami dango (🍡), which is immediately recognisable due to its well-known pink, green, and white dumpling combination, and its connection to the cherry blossom season.

Tsukimi dango, which is associated with moon viewing in autumn, simply consists of a predetermined number of stacked plain dumplings (without skewers), which are said to look like the moon itself. Other dango varieties include Kinako dango, which is covered in a delicious roasted soybean flour; the green-coloured Yomogi dango, made with Japanese mugwort; Kurumi dango, which is topped with a walnut sauce or paste; and Sasa dango, hailing from the Niigata Prefecture, which sees the dumplings wrapped in bamboo leaves.

Whether you savor dango during annual festivals, or snack on your favorite variety all year round, there are many more wagashi well worth trying while you’re in Japan, from taiyaki (fish-shaped cake) and mochi (glutinous rice cake) to daifuku (mochi filled with anko, a sweet red bean paste). Apart from the way in which mochi and dango are presented, it is important to note that there is an integral difference between the two wagashi, which is sometimes confused. While dango is made using a combination of glutinous and non-glutinous rice flours, mochi is made using steamed glutinous rice called mochigome.

While you probably want to add the Mitarashi dango from Kamo Mitarashi Chaya to your list of must-try foods the next time you’re in Kyoto, thankfully, you can find Mitarashi dango in numerous places across Japan, and worldwide, from convenience stores and street-food stalls to specialty dessert bars. Is Mitarashi dango your favorite wagashi? Let us know in the comments!