Kuzumochi: The Mochi That Isn’t Mochi 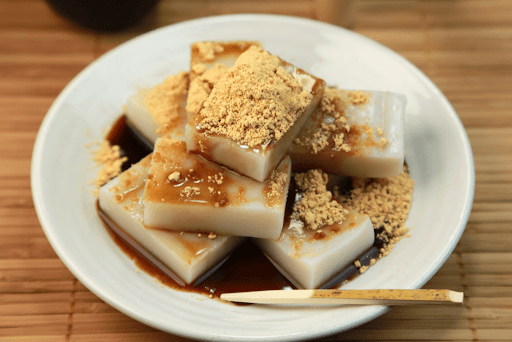 With Japanese mochi rice cakes becoming increasingly popular worldwide, the pleasantly chewy sweet has gained a large following. Mochi encasing a sweet filling, called daifuku, are particularly popular, but only represent the tip of the iceberg. Enter the little-known kuzumochi.

Most importantly, kuzumochi is not mochi in the classic sense, as it does not actually contain any rice. If that was not confusing enough, the term also refers to several dishes.

These dishes all revolve around the same core dish: A jellylike block made by mixing a starchy powder with water and sugar. Firmer than jelly but similar in appearance, kuzumochi has a very, very light flavor, which is almost always complemented by brown sugar syrup and kinako, flour made from soybeans.

More so than its reserved taste, kuzumochi’s appeal is its cooling effect. Served with a cold drink, kuzumochi is the perfect dish for Japan’s hot and humid summer.

Most commonly, the term kuzumochi refers to a jelly-like dessert made with starch from the kudzu plant. The spelling kudzumochi and kuzumochi seem to be equally popular, but refer to the same dish. Found all over East Asia, the kudzu plant’s ground up roots are used as a starchy flour for a variety of dishes, usually as a thickener.

Mixed with water and slowly heated, kudzu powder turns into slightly translucent kuzumochi. Not a ‘true mochi’ as it does not contain any rice, it instead offers a lightly textured dessert with easily adjustable sweetness. As true kuzumochi is both vegan and gluten-free, it is also a great alternative to standard mochi for those with dietary restrictions.

Different ways of spelling are not the only oddity with kuzumochi. There are also regional varieties completely devoid of kudzu powder, but instead involving fermentation. This makes kuzumochi the only fermented wagashi Japanese sweet there is.

The term can also refer to a specialty of Eastern Japan, made by fermenting wheat starch in lactic acid bacteria, usually for at least one year. The sour smell of fermentation is removed by a water rinse, with the starch then steamed to the desired texture and firmness. While different in taste, the two have practically the same appearance and are served in the same way: With roasted soybean flour and brown sugar.

Fermented kuzumochi’s name relates to the name of its supposed discoverer, a Mr. Kyubei. About 150 years ago, a barrel of wheat flour outside of his house did not seal tight, with rain water entering inside. One day Mr. Kyubei found this barrel separated, as the fermentation process caused the flour to expand.

This initial barrel was discarded, but Kyubei decided to experiment with the converted starch to create a new kind of dessert. He presented it to the head of his neighborhood temple Kawasaki Daishi, who approved of it, and decided to name it. Using the first character of Mr. Kyubei’s name Ku and adding the auspicious character for long life zu, he dubbed it kuzumochi.

The city of Kawasaki just south of Tokyo is still a famous place to try the fermented version, with numerous tradition rich shops vying for customers.

Both types of kuzumochi have a very mild taste on their own, but connoisseurs swear by their favorites. Fermented kuzumochi only allows for adjustment through adjusting the fermentation or steaming time as its shelf life is a mere three days, but kuzumochi made with kudzu flour have plenty of options to add flavor.

We love kuzumochi (the non-fermented kind) and regularly feature it in our Sakuraco boxes. Have you tried it yet? What did you think? Would you also be interested in the fermented kind? Let us know in the comments below.