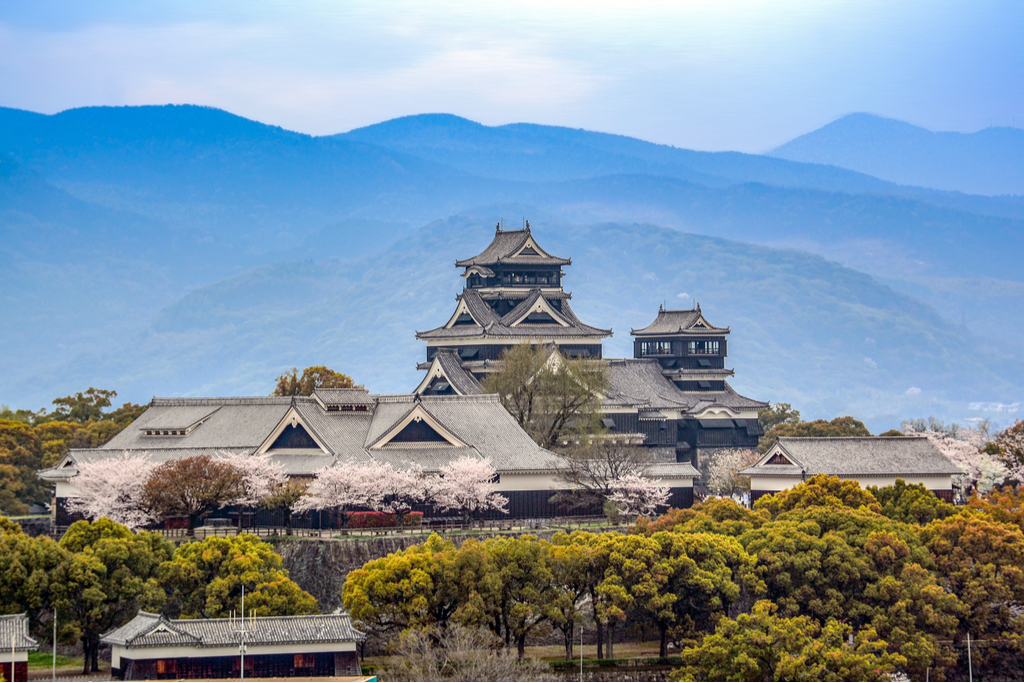 As one of the 3 premier castles of Japan, along with Himeji Castle and Matsumoto Castle, Kumamoto Castle is the pride of Kumamoto City. Starting out as a fortress in the 15th century, this beautiful structure has been the residence of several notable historical figures and has seen many battles. Read on to learn about the dramatic history of this architectural masterpiece.

A Castle Ready for Battle

The castle first began as fortifications in 1467, with additions and expansions added over the centuries, before being finally completed in 1607 by Kato Kiyomasa, the first feudal lord to reside there. There are many interesting architectural features that were added specifically to protect against attacks, some of which are unique to Kumamoto Castle such as the dark passage (Kuragari-Tsuro), an underground stone tunnel that runs beneath the great hall. This was perhaps a way to sneak out important people in the event of a risk to their safety.

But the most prominent feature to protect the castle is the impressive foundation that was built at a specific angle with tight-fitting stonework to ensure scaling would be incredibly difficult.  There are also many traps hidden in inconspicuous places throughout the castle to deter attackers.

A Castle Under Attack

In 1877, the castle became the battleground for the Satsuma Rebellion against the Meiji Government and it was during this conflict that two of the towers as well as the inner palace were set on fire. Then once again, in World War II, the historical site suffered even more damage by air attacks. Interestingly, it would be aerial photographs from these planes that would later on help with the restoration efforts.

In the 1960’s, once the city had the funds to invest in the project, much of the castle was restored. However due to a lack of historical research but also access to materials, it was mainly repaired with concrete. Later on, from 1998 to 2008, historians were called in to advise on the construction techniques resulting in more accurate repairs and rebuilding of the 17th century structures. Reconstructing the stonework in particular was an incredibly arduous task, much like a very complicated puzzle, it involved matching up endless pieces to try and match what it would have looked like hundreds of years ago.

In 2016, a 7.0 magnitude earthquake struck under the city of Kumamoto and damaged the castle and almost 60 years of restoration work. But given the love the citizens of Kumamoto have for this beautiful fortress, hopefully it will only be a matter of time before it will be able to welcome visitors once again.

Since the earthquake, the castle has been under constant repairs but incredibly one of the towers managed to survive with almost no damage. It has since become a symbol of the resilience of the people of Kumamoto.

A Castle for All Seasons

Once an imposing structure, Kumamoto Castle is now a historical site, museum, and place to gather and celebrate the changing of the seasons. In springtime, there are pink fluffy cherry blossoms, in summer the trees are vibrant green, in fall the infamous ginkgo tree turns a vibrant yellow, and in winter the snow creeps up the stone foundation.

Do you have any historical sites where you live that hold important significance for the town or city? Have you ever been to a Japanese castle? Let us know in the comments below.