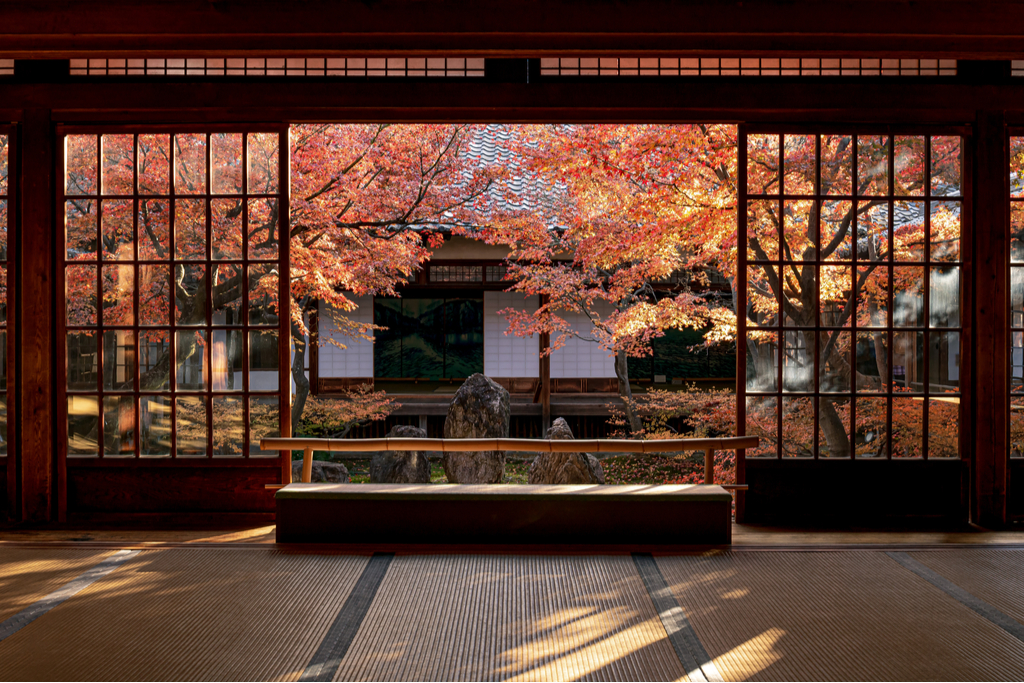 Since the 8th century, Japan has had a tradition of marvelling at the changing of the leaves called “koyo”. While it was initially reserved for nobility, now everyone can take part. From the bright reds of Japanese maple to the sunny yellows of ginkgo leaves, this custom is a full on celebration of the season. But what exactly does it entail?

Every year from the end of September to the beginning of December, Japanese people delight in the spectacular fall foliage. Some simply take in the beautiful colors in a nearby park, while others venture to popular spots across the country for a truly unforgettable experience.

The custom of taking in the sights of the autumn leaves with family, friends, and guests, while enjoying a selection of seasonal delights, first started in the Heian Period (794-1195). However, like many Japanese traditions, it was initially reserved exclusively for the upper classes.

Nobility would go on excursions together to the mountains and references to the changing of the leaves first entered into music and poetry from around this time. There is even a word for this activity, “momijigari”, which means to hunt for Japanese maple leaves. The word even makes appearances in Japanese literary classics, such as the ‘The Tale of Genji’.

Starting in the Edo Period (1603-1868), the culture of the upper classes began to be shared with the common people and koyo became a yearly tradition enjoyed by everyone around the 18th century.

How to Celebrate Koyo

Koyo is more than just looking at beautiful leaves, it encompasses a full celebration of autumn.

Many people in Japan will spend the weekend outside the city to enjoy the changing colors. Some spots are so popular, like Ryuzu Falls in Nikko, that one’s stay needs to be booked weeks, sometimes months, in advance. However, going on a trip is not necessary, some people prefer to enjoy locations closer to home, such as parks.

Once the heat of summer is finally over, fall-flavored foods suddenly pop up in supermarkets, restaurants, and at street food stalls. The most popular flavors are chestnut, sweet potato, persimmon, and kabocha (Japanese pumpkin) which feature heavily in both traditional and modern dishes.

It is also during this time that Japanese people will start making nabe (hot pot) which is a favorite dish for get-togethers due to the fun of cooking a meal together while seated around a tabletop stove. Some people are even so ambitious as to bring all the ingredients for nabe with them to a park and enjoy it in the great outdoors.

Like in summer, there are many major festivals that take place across the country. This is due to the tradition of thanking the gods for a good harvest. However, compared to summer festivals where the mikoshi is the star, there is a lot more variety in autumn with some floats being made of lanterns, and other parading enormous historical and mythical figures.

As many people know, cherry blossom season is a big deal in Japan with the country going into full on flower pandemonium for about a month. Many news outlets and websites provide live updates on the estimated dates for full bloom depending on the region, and koyo follows exactly the same tradition.

Due to Japan being a long archipelago positioned almost north-south, the climate varies dramatically in different prefectures. In the northern prefectures, koyo starts around the end of September, while in the southern prefectures it can happen as late as mid-December. The live updates and predictions help people to make travel plans in order to catch the autumn foliage when it is at its peak.

While there are beautiful spots to enjoy the leaves all over Japan, Kyushu is home to some particularly spectacular historic sites that are not to be missed in autumn.

Located in a valley in northern Kumamoto, this hot spring has a history that stretches back over 1,800 years. In autumn, the valley comes alive with rich red hues and what could be better than enjoying koyo while relaxing in a luxurious outdoor spa?

This garden was once the residence of a powerful feudal family and offers a beautiful view of the leaves as well as the yearly chrysanthemum festival. Walk in the same steps of those from centuries past and delight in the gorgeous Japanese maple trees contrasted against the backdrop of Mt. Sakurajima.

One of the most popular spots in all of Kyushu, this garden is actually a former historical residence that was remodeled into a traditional Japanese tea house. What makes this location so special is that it is closed to the public for the majority of year but opens its gates for 9 days during the peak of autumn foliage.

Do you enjoy the fall leaves where you live? Would you prefer to come to Japan for cherry sakura season or koyo season? Let us know in the comments below.