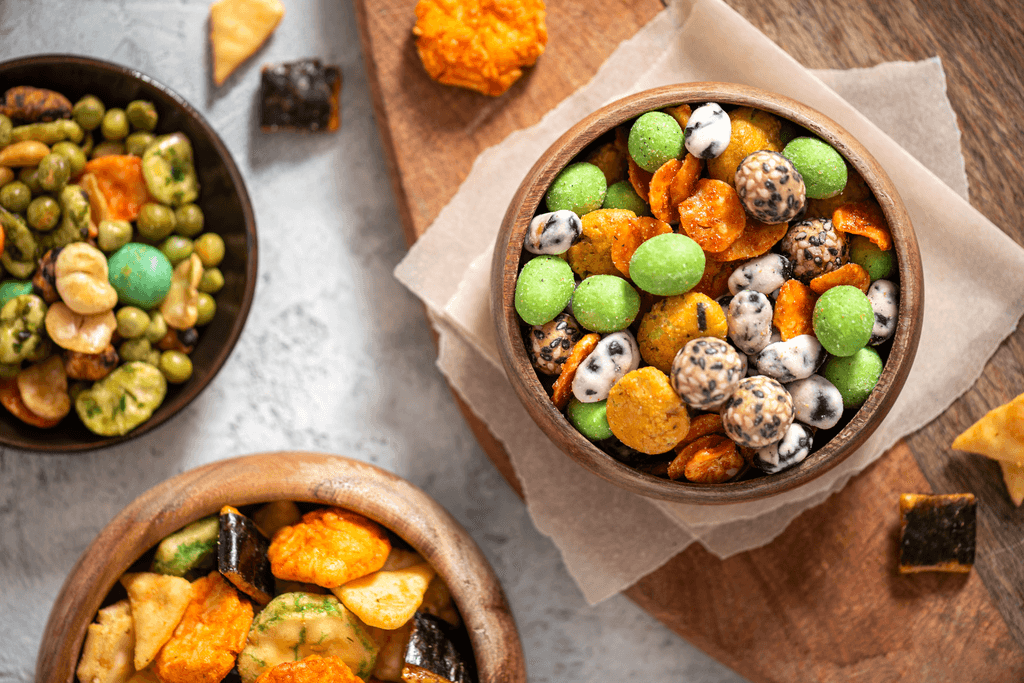 There are many delicious snacks to enjoy in Japan, from fried foods to sweets! You may have heard of popular snacks like Pocky, Hi-Chew, senbei, and dorayaki, but there are also traditional Japanese snacks worth trying.

Japanese traditional snacks often make use of rice, beans, and eggs. These simple ingredients have contributed to many much-loved traditional snacks such as karinto, irimame, amanatto and so much more! This article will explore some underrated traditional Japanese snacks that you can look for when you visit Japan next time.

Karinto is a deep-fried sweet food. It is made by kneading wheat flour with eggs and sugar and then cutting it into long strips. The long strips are then fried in oil and dusted with brown sugar. Karinto is said to have originated in the Nara period (710-784) after it was brought over from China in the Tang Dynasty (618-907).

The snack was particularly popular in the Kyushu and Shikoku regions. The reason why the standard karinto is dusted with brown sugar is because during the Edo period (1603-1868) white sugar was considered a luxury and was only allowed to be used in sweets made in Kyoto.

In the past, the use of white sugar was prohibited for cheap sweets like karinto – so brown sugar was used instead. However, nowadays you can find karinto dusted with white sugar, sesame seeds, miso, or peanuts! This snack is often enjoyed with green tea or sake.

Irimame are dry roasted soybeans that are mostly known for their role in the Japanese Lunar New Year festival Setsubun. During this festival, people throw beans at demons in hopes of warding off bad luck. It is thought that if you eat irimame in an amount corresponding to your age you will receive good fortune.

This might have stemmed from the understanding that roasted soybeans have a lot of protein, fiber, and iron –  making them a very healthy snack! While soybeans by themselves are not sweet, irimame occasionally is eaten as sweet when they are covered in sugar. Irimame  is often enjoyed with beer or soda.

Kaki no tane are small rice crackers mixed with peanuts, named after their similarity to persimmon seeds in Japanese. They are typically slightly spicy, and very popular among drinkers of alcoholic beverages such as beer.

In 2017, kaki no tane was officially certified as “space food” by the Japan Aerospace Exploration Agency (JAXA) to help maintain and boost astronauts’ morale while they’re in space.

If you love wasabi, this snack is for you! Wasabi peas are a healthy snack made by coating roasted or dehydrated green peas with wasabi, salt, sugar, and oil. The peas have a striking salty and spicy flavor and are very crunchy.

Although they are spicy they are very addictive! These peas can be enjoyed with alcoholic beverages such as sake or beer, but they can also be enjoyed with soda or water. Compared to packed chips, this snack is a much healthier alternative as they contain a lot of nutrients such as Vitamin K, protein, manganese, copper, and thiamin.

If you ever researched about a common food that non-Japanese people struggle with in Japan then you may know of natto, which are fermented soybeans. However, amanatto is the sweet alternative to natto which can be enjoyed by anyone! Amanatto is made from beans (usually azuki red beans or black beans) that are cooked in sugar syrup.

After being cooked and dried the beans are once again covered with more sugar, making them the perfect sugary snack!  Although they are sugary, azuki beans are healthy because they are rich in fiber and protein! This snack originated in the Edo period and was created by the confectioner Hosoda Yasubei at this Tokyo wagashi (traditional Japanese sweets store), Eitaro Confectionery. The store is still in operation today, it’s a good place to stop by if you’re ever in the area.

There are three common rice crackers in Japan – okaki, arare, and senbei. Okaki are rice crackers that are typically made from just two ingredients – glutinous rice and salt! The rice is first cleaned and polished and then steamed (some brands deep fry it instead) in order to make it into mochi.

The mochi is then cut and dried for about a week and then it is baked. The texture of this snack is chewy and the taste can be sweet or savory. Nowadays it is common for people to make okaki with seaweed or sesame. This snack is best enjoyed with green tea, beer, or soda. Arare is similar to okaki but arare is cut into smaller pieces. Senbei is different from okaki as it uses non-glutinous rice.

Kenpi is a snack made from sweet potato that originated from Kochi Prefecture. The snack is made by cutting sweet potatoes into thin 1cm strips and deep frying them until they are golden brown in color. The strips are then put into a sugar glaze. Kenpi has a crispy texture and a salty and sweet taste. This snack can be enjoyed with cider or tea.

Tamago boro is a type of cookie – sometimes it is referred to as an “egg cookie”. The cookie is made by mixing egg yolks,sugar, starch, and milk. Once mixed to make a dough, the dough is rolled into small balls and baked until they are slightly brown. The cookies typically have a slightly sweet taste and will melt in your mouth! This snack is very popular with children and is typically prepared around Christmas time. You can enjoy it with tea, coffee, or hot milk!

As you can see, traditional Japanese snacks cover a wide variety of flavors and textures. They are eaten on different occasions, ranging from formal to casual. Have you ever eaten any of these snacks before? Let us know in the comments below.