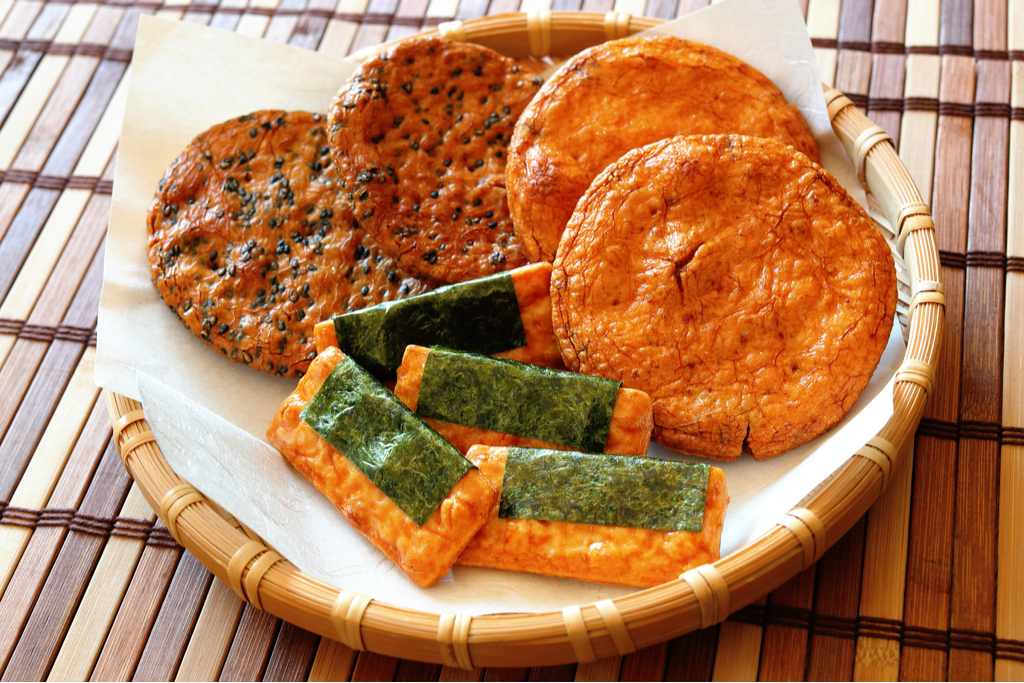 One of the best Japanese snacks is Japanese rice crackers. You can’t go wrong with these delectable treats, which range in flavors from salty to sweet to light and airy to firm and crunchy. But which ones to buy? Let’s look at the best rice snacks you won’t regret trying!

What are Japanese rice crackers?

As shown above, rice crackers are a traditional Japanese snack. Rice crackers come in a wide range of flavors, including hand-grilled, fried, and moist, to mention a few, and they pair perfectly with alcohol or tea.

Fun fact: Many believe rice crackers are healthy because they have few calories. But since they’re almost entirely composed of carbohydrates, they can induce a quick spike in blood sugar levels and lead to weight gain.

There are two types of rice crackers: senbei and okaki. The difference between these two is the type of rice they use.

Okaki rice crackers use glutinous rice, also known as mochigome in Japanese, which is the main ingredient for mochi. Senbei rice crackers, on the other hand, use short-grain Japanese koshihikari rice.

There’s a delicate balance of saltiness and subtle sweetness. These snacks are a favorite of not only the Japanese but people worldwide! It’s an excellent snack for children and also for adults.

As a quick snack to revive your energy, share them with your friends while you’re out and about! The fried rice crackers feature additional calcium and a delicate honey taste. Kotsubukko is one of the best Japanese snacks to pair with beer since, generally speaking, Japanese people really appreciate the mix of sweet and salty!

Kameda no Kaki no Tane

Crescent moon rice crackers and peanuts are combined to create the traditional Kaki no Tane by Kameda Seika. These snacks are incredibly addictive and well-liked in Japan; people love them for their light soy sauce flavor and crispy crunch.

Based on customer feedback, Kameda has improved its recipe by switching the ratio of 7:3 rice crackers to peanuts to create their “golden ratio.”

Everyone knows Pota Pota-Yaki, the Japanese rice crackers with a beloved elderly woman as their mascot. They’re baked with plenty of sweet soy sauce and have a fantastic crispy texture.

There’s no chemical seasoning involved, so this snack is all-natural tasting. The sweet and gentle taste calls back to the nostalgic aroma of grandma making rice crackers at home, carefully and with a lot of love.

Since its release in 1986, Pota Pota-Yaki has been a continuous bestseller and a national favorite. Mitarashi dango (grilled rice cakes topped with soy sauce-based sauce) inspired the branded snack’s, robust sweetness. When people think of “sweet and salty,” they usually think of this particular rice cracker.

What stands out about Amanoya’s Kabuki-age rice crackers is its subtle, delicious, sweet, and salty soy sauce flavoring. It has a texture that seems hard but is quite soft, with a crispy surface and a chewy interior. Despite being fried, it doesn’t seem too heavy because it dissolves in the mouth.

This rice cracker, in particular, has been a bestseller in Japan for ages. Kabuki-age is for those who want to eat something sweet, soft, and mild.

This tasty rice cracker snack boasts a rich flavor of edamame. They mainly use a soybean variety called dadacha-mame, rich in umami and with a wonderfully subtle sweetness.

The crackers taste like beans despite having a nice crunch and crispy texture. People who want to keep an eye on their weight and health also can snack on these without worry.

These crackers are shaped like onigiri rice balls and have an exciting flavor of aged soy sauce and seaweed flakes.

Their softness made them easy to eat. These are the best choice if you’re looking for a rice cracker with a mild flavor.

Looking to enjoy Japanese rice snacks without leaving your home? Check out Sakuraco! Sakuraco delivers traditional Japanese snacks, teas, sweets, and snacks from local Japanese makers directly to your door so you can enjoy the latest treats from Japan!

These Japanese rice crackers have a gentle and crunchy texture with milk cream sandwiched between soft white crackers. It contains the rice-derived lactic acid bacteria K-2 and 10 of them have as much calcium as a small pack of milk. That means they’re delicious and excellent for nutrition and health-oriented people.

Unexpectedly fluffy and soft, the white rice crackers melt in your mouth like wafers and delight your taste buds with sweet cream. They offer a snack adventure you’ve never had before and have a somewhat different texture from cookies. They will undoubtedly become one of your new tea-time favorites.

They are hard rice crackers made with black beans, which offer a wonderfully fragrant taste. The beans add a unique layer of texture to the rice crackers, keeping things interesting.

But to make the most of the fragrance of the black beans, the rice crackers themselves aren’t heavily seasoned, being just lightly salted. This rice cracker is perfect for those who prefer a milder but more delicious taste!

These crackers generally have umeboshi plums, pungent wasabi-grated Japanese horseradish, and soy sauce. Like sushi rolls, the aromatic nori seaweed portion elevates the flavor of the savory rice cracker. They have a good mix of savory and mildly sweet flavors. If you have several brands of nori maki to choose from, go for the bag with darker brown crackers. They’re likely going to be more flavorful.

This snack is a mixed package of sweet and savory rice crackers, and the brown pieces have a mildly sweet soy sauce flavor. Some pieces have a large grain sugar coating that looks like demerara sugar. There’s also nori wrapped around some of the brown pieces of crackers. The lighter brown pieces are seasoned with salt and a few other seasonings and are purely savory.

Japanese rice snacks are delicious and usually combine the savouriness of soy sauce and the sweetness of the syrup. It’s an unforgettable snack that has been a big part of Japanese culture. People enjoy these snacks during Japanese celebrations such as New Year’s.

Do you have a favorite Japanese rice snack you would like to try? Let us know in the comments below!