How to Use Butter in Japanese Food: The Best Guide 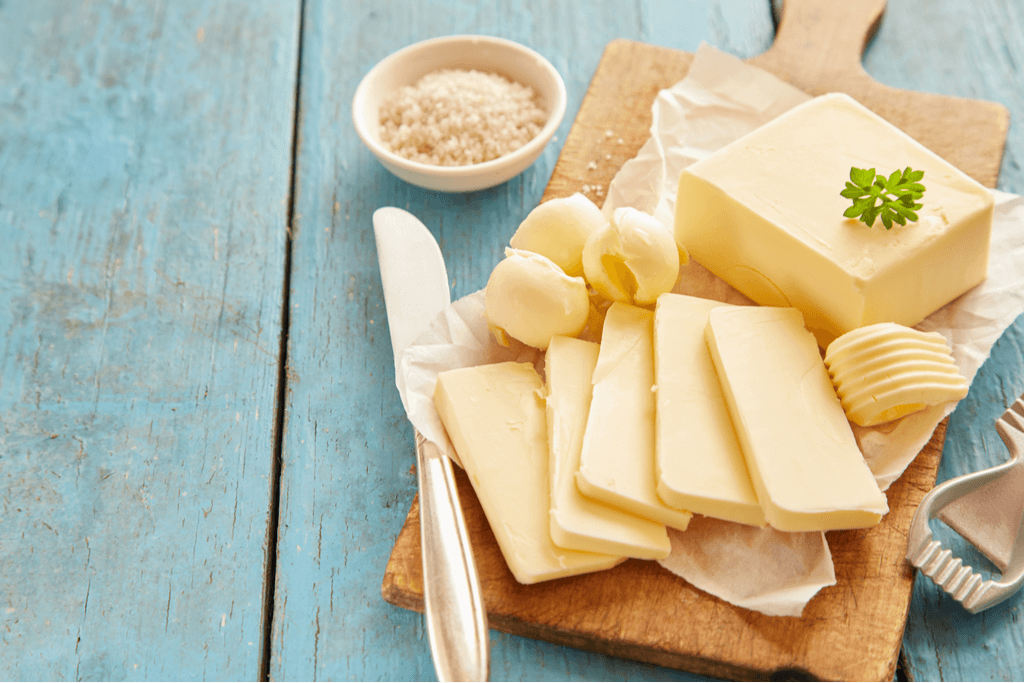 Butter in Japanese food is a trendy ingredient! From savory to sweet dishes, butter adds a richness to the nation’s cuisine that is incomparable. There are also many different ways to say “butter” in Japanese. Let’s take a closer look at the many linguistic and culinary possibilities that butter in Japanese food offers.

The most used Japanese word for butter is “バター,” or “bataa” in romaji. When pronounced, use the “bah” from “bother” and elongate it. The word comes from English and is an example of wasei eigo. Wasei eigo words are Japanese expressions based on English words.

There are other uncommon Japanese words, like nyuuraku (乳酪) or “dairy products.” Nowadays, it often refers to butter. Another obsolete term for butter is gyuuraku (牛酪). However, these words are less convenient than “バター” and are why people don’t use them in everyday Japanese.

The History of Butter in Japanese Food

Buddhism and the custom of drinking milk arrived in Japan in about the sixth century. This made condensed milk the oldest dairy product in ancient Japan. After the 18th century, Japan once more began to import dairy products. Though rumors say that Dutch traders in Dejima, Nagasaki, produced dairy as well, there has been no concrete proof.

In Japan, butter manufacturing got its start during the Meiji period. The Meiji administration promoted milk consumption and cattle production, imitating Western policies. Butter production began in 1872 on an experimental basis at Hokkaido Kaitaku No. 3 Official Farm in Azabu, Tokyo. When the company Hokushinsha in Kojimachi, Tokyo, invented a cream separator and a rotating churn, full-scale production began in 1885.

Consumption of butter rose after the Pacific War ended in 1945. Nevertheless, around 1950, higher-quality margarine entered the market alongside butter. A wide range of goods is in production to satisfy customer demands, including easy-to-spread fermented and whipped butter.

Butter has become so popular in Japan that there are many ways that the Japanese people have incorporated it into their cuisine.

Japanese Butter Mochi is a wagashi or Japanese sweet, a regional delicacy of Akita Prefecture. It has some similarities to the Hawaiian treat of the same name. Mochi is soaked in water overnight to make butter mochi, which goes with ingredients such as flour, egg yolk, and sugar.

The mochi’s soft texture is preserved by adding butter. This makes it impossible to harden over time and allows you to enjoy it without baking. It is a local delicacy of Kitaakita City in October 2011 as a locally produced candy. Consumers have praised its distinctive texture and flavor.

We all know that Hokkaido is famous for its dairy and miso ramen. Miso ramen originally came from here, but it’s also Japan’s largest producer of corn.

In Hokkaido, it is common to combine these two ingredients. In the 1960s, a ramen restaurant was created and popularized this method of eating ramen. As the butter imparts a milky flavor, the saltiness diminishes. All of this also gives the flavor a lot of complexity.

Because of this, many people think Sapporo ramen has corn and butter. On the contrary, aside from ramen in tourist traps, it doesn’t usually include these ingredients. However, many restaurants prepare corn and butter as toppings since they go well with ramen.

While you may think this invention comes from a quirky conveyor-belt sushi restaurant,  Jinen is a traditional establishment. They added a butter cut over their sushi, making for a quirky dish.

Unagi or eel nigirizushi, in this case, is vinegared rice topped with unagi topped with butter held together by seaweed. The butter slowly melts over the eel, which boosts the dish’s palate.

The flavor is rich and decadent, and you can’t help but marvel at the restaurant’s ingenuity. It’s the only item on the menu with butter. According to the restaurant, it’s the second-most popular item for female diners (the most popular is toro or fatty tuna).

Perhaps the most straightforward food on this list, butter rice is also a famous dish. It’s so popular that the Japanese Netflix series, Midnight Diner, featured it in its fifth episode. Here, a renowned food critic comes to the diner. Even though he is very meticulous about food, he has a soft spot for the nostalgic dish.

Simply scoop rice into a bowl and add your preferred helping of butter. Let it melt over the steaming rice for half a minute, then add a dash of soy sauce. The result will be the richest, creamiest bowl of rice you have ever had.

Jagabata, or buttered potatoes, are a festival favorite in Japan. In Japanese, potato is called “jagaimo,” or simply “jaga.” Although it originated in Hokkaido, Jamany people enjoy jagabata due to its excellent flavor and simplicity of preparation.

The food is exactly the way it sounds. Potatoes are baked, steamed, boiled, and loaded with delicious butter. This allows the consumer to enjoy the potato’s fluffiness and the butter’s richness. This world-famous snack can be found at festivals; even the US president enjoyed it in 2019.

What do you think of butter in Japanese cuisine? Have you ever tried any of the foods on our list? Let us know in the comments below!