Chazuke Is an Underrated Japanese Dish 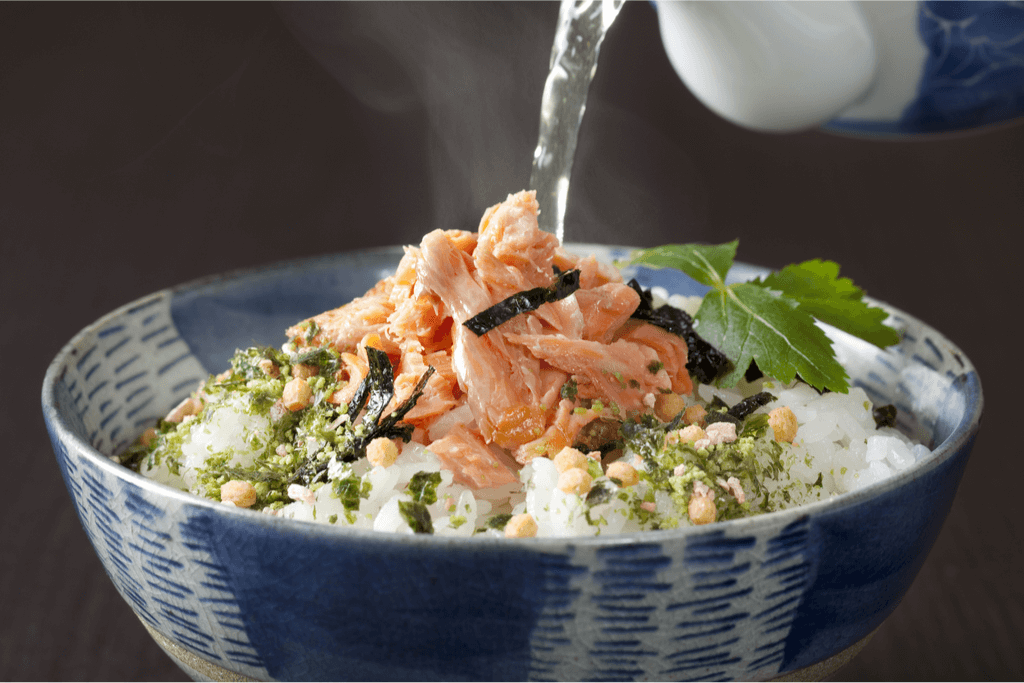 Chazuke–also known as tea rice–is an underrated, yet tasty part of Japanese cuisine. Just add a hot cup of green tea or dashi broth over some cooked rice, and you got yourself a humble Japanese dish that’s good for sprucing up some leftovers.

The chazuke dish originated during the Heian era.  It’s originally known as a type of Kyoto food, also known as bubuzuke. Read on to learn more about this underrated Japanese dish!

Chazuke is a versatile dish that is made of a hot liquid poured over white rice.  “Cha” stands for “tea”, while “zuke” means “to soak”. The hot liquid is usually some form of Japanese green tea. However, when it’s prepared as an izakaya food, you can use savory dashi broth instead.

When using green tea, bold toppings such as seaweed, furikake (a form of Japanese seasoning) and even raw fish are quite common. On the contrary, dashi broth allows for more understated toppings like arare (rice cracker garnish) and sesame kombu (a type of seaweed).

Similar to other classic dishes like okonomiyaki, chazuke is highly customizable.  In addition to the broth, you can use brown rice and even black rice instead of the usual white rice. You can also drink with cold liquid instead, which could be very refreshing on hot days!

If you have even less time to whip up some ochazuke, you can buy flavored ochazuke powder to mix with hot water.  Miso soup can also be used.

Salmon chazuke, also known as sake chazuke (not to be confused with the rice wine sake)  is the most popular.  It uses either salmon flakes or filet, and is usually paired with seaweed.  The mild, yet oily taste of salmon pairs well with green tea, but brown rice tea can also be used as well.

Pickled plum ochazuke, also known as ume chazuke, is an even lighter edition of this minimalist dish. It’s white rice with umeboshi (pickled plum) on top.  Since umeboshi is already salty, a simple green tea broth will do.  For those who don’t have umeboshi available, a simple plum shiso (perilla leaf) chazuke powder will do.

Tai chazuke uses sea bream, a white fish that’s less fatty than salmon.  Sea bream is an iconic fish in Japanese culture.  Not only is its red color considered good luck, it also serves as the main inspiration for taiyaki, a fish-shaped pastry filled with red bean paste.

However, when it comes to the actual fish, sea bream is meatier and a little sweeter than salmon. Because of this, the sea bream is marinated in a homemade sesame sauce for extra flavor.  Wasabi and seaweed can also be used.

Unagi chazuke uses broiled eel, a beloved summertime food.  This particular dish hails from Nagoya, which is Japan’s biggest producer of eel.  Heavily inspired by their delicacy hitsumabushi (thinly-sliced grilled eel over a large tub of rice), eel chazuke is usually eaten when ⅓ of the main dish remains.

What kind of chazuke have you eaten before? What other ones would you like to try? Let us know in the comments below!