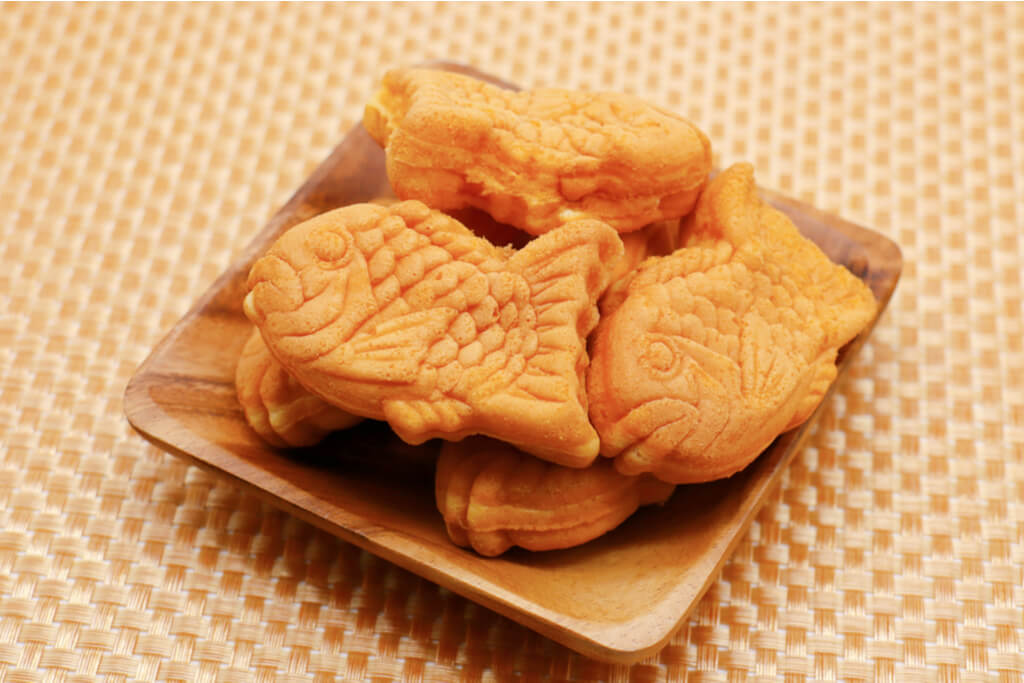 If you like Japanese snacks, chances are you’ve probably already seen these fish-shaped cakes before. But how much do you know about them?

Taiyaki, a popular Japanese pastry designed with the features of a cartoonish fish, are a traditional Japanese snack that has been enjoyed in Japan for over a century. Read on to learn all about taiyaki and why it is one of the top street foods in Japan and abroad!

Given the eye-catching fish shape, you might be forgiven for assuming taiyaki is a savory seafood snack, or some sort of weird fish bread. As a matter of fact, taiyaki is a treat similar to pancakes or waffles, and usually sweet! With a slightly thinner batter than pancakes, this Japanese treat is thick and crispy around the edges and chewy towards the center with a texture perfectly suited for flavored fillings.

Traditionally, the filling consisted almost exclusively of mashed azuki beans (Japanese sweet red beans) making it similar to the Japanese red bean pancake, dorayaki. Nowadays, you’ll find all kinds of sweet varieties of this pastry. However, there are a few savory ones too!

The History of Taiyaki

Compared to other wagashi (traditional Japanese sweets), taiyaki is a relatively modern addition to Japanese treats. Dating back to 1909, the recipe is actually an adaptation of an older Japanese sweet, imagawayaki, a kind of thick pancake with a sweet red bean filling.

Imagawayaki was invented and popularized during the An’ei years (1772–1781) of the Edo period, but by the early 1900s, imagawayaki salesmen were looking for new ways to revitalize their industry. One idea involved making their imagawayaki pancakes into a variety of different animal shapes such as turtles and rabbits to attract more customers.

Looking for a taste of Japanese culture? Sakuraco is a subscription box delivering delicious traditional snacks and teas straight from Japan to your door, every month!

These attempts to re-popularize imagawayaki were largely unsuccessful until 1909, when one imagawayaki seller decided to make his pancakes in the shape of red seabream, or, in Japanese, tai. Sea bream is a popular fish in Japanese cuisine, served on special occasions such as New Year’s Day and weddings. One reason for this was the higher cost of the fish, which is still quite expensive in Japan today.

Another reason is the sea bream’s long-standing association with good luck and celebration. The word tai rhymes with the Japanese word, medetai, meaning joyful and happy, and a Japanese expression further associates the two: tai wa medetai, or, “sea bream is for celebrations.” Unlike the rabbit and turtle imagawayaki, pancakes in the shape of red seabream took off immediately. Before long, it had become a new kind of snack entirely, dubbed taiyaki: fried sea bream.

Since then, taiyaki has evolved into a cornerstone of Japanese street food culture. While permanent, brick-and-mortar taiyaki shops can be found all around Japan, it’s especially common to see this snack being sold from food stands erected around shrines and sightseeing destinations, and often present at local festivals. In this way, Japan’s little fish pastry stays true to its celebratory origins: primarily consumed on-the-go as a festival food or during special occasions.

One area in which modern taiyaki departs from its traditional counterpart is fillings. While it is traditionally filled with sweet red bean paste, these days, you’ll find that’s only one of many options you can choose from! Some of the best taiyaki flavors include custard, chocolate, and matcha. Although slightly rarer, you can also find a sakura-flavored version in springtime, sweet potato taiyaki, and savory combo varieties including some other popular foods to try in Japan such as cheese, gyoza, and even okonomiyaki!

Last but not least, just like pancakes or waffles, taiyaki can be combined with ice cream to great effect! Similar to ice cream melonpan (melon bread), in this variety, the taiyaki serves as a cone for soft-serve Japanese ice cream, essentially replacing or combining with any other taiyaki fillings. Unsurprisingly, the crunchiness of the taiyaki goes wonderfully with the smooth, creamy ice cream, and is a particular favorite during Japan’s hot summer months.

How to Make Taiyaki

Taiyaki is best consumed as the street food it is: munched on still-hot from the pan as you wander around a park during a matsuri (Japanese festival). If, however, getting one fresh from a street vendor isn’t an option, you can also find premade frozen ones in Japanese supermarkets or—even better—make your own!

Making taiyaki is easy, save for one small caveat. In order to make the traditional, fish-shaped variety of this snack from home, you’ll need a taiyaki pan: a kind of sandwich press similar to a waffle maker containing a number of fish-shaped molds. Although it might seem like a bit of hassle to buy a special tool just for taiyaki, it’s well worth the trouble: the pan is integral to creating sufficient space for your filling and ensuring your favorite fish pastry is well-sealed and crisp at the edges! What’s more, these pans can be bought easily and relatively cheaply online, making the investment a no-brainer for true aficionados.

Luckily, the only other things you’ll need for taiyaki are basic home staples: cake flour, baking powder and soda, milk, sugar, eggs, and whatever ingredients you want for your filling. To begin with, you’ll need to make the batter. Similar to pancake or waffle batter, you’ll want to prepare the wet and dry ingredients separately before combining.

First, sift the cake flour, baking powder, and baking soda into a bowl with the sugar. In a separate bowl, whisk the egg and milk, before combining with the dry ingredients and whisking well. At this point, most taiyaki recipes will suggest refrigerating the mix for up to an hour to ensure a smooth batter. If you’re low on time and want to skip this step, whisk the wet and dry ingredients together only lightly, so that less gluten is created.

Once the batter is ready, it’s time to make the taiyaki! Heat the pan and brush it with vegetable oil. When the pan is hot, pour batter into the molds on one side of the pan until about half full, top with your filling of choice, and then cover with more batter. Close the taiyaki pan and cook for about 5 minutes, flipping occasionally to make sure both sides are cooked equally. Once golden brown, carefully remove the taiyaki from the pan and let it cool or eat it immediately for that authentic, mouth-burning, street food experience!

For anyone with an interest in Japanese food and culture, taiyaki is an unmissable experience. Indeed, this treat is so popular in Japan that it’s become part of Japanese pop-psychology, with the way you eat taiyaki said to reveal an important aspect of your personality. People who eat their taiyaki starting with the head are said to be optimistic and assertive. Tail-eaters, conversely, are believed to be calm and idealistic. Finally, those who bite into this snack from the side are energetic, athletic, and easy-going.

If you’ve had taiyaki before, which category do you fall into? If you haven’t, where do you think you’ll end up? Let us know in the comments below!