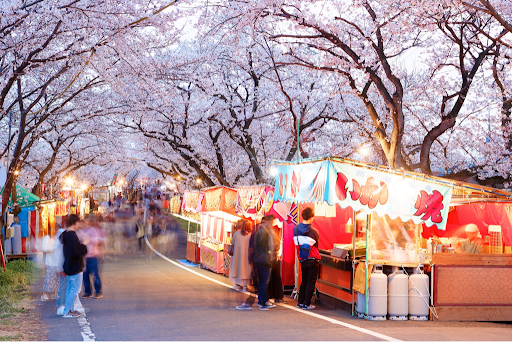 Sakura season is nearly here and plans for hanami, or cherry blossom viewing, are being made all over the country. With thousands of trees scattered across Japan, there is certainly no shortage of options when choosing where to set up for a picnic with friends and family. If you only have time for one sakura gathering however, where exactly are the best places to see cherry blossoms in Japan?

There are few rules for how exactly hanami should be celebrated, but sharing food and drink is at the core of the celebrations. There are specific traditional Japanese sweets for the sakura season, but they rarely stand in the foreground. Copious amounts of savory food, are usuallyon offer from stalls at cherry blossom festivals, and different alcohols are on the menu, often until late night.

What there is a rule for however, is reservations. The most beautiful sakura spots are popular, especially in the larger cities. Reserving a spot by putting down vinyl sheets or blankets complete with one’s name is the norm, with some areas barring people from sitting down and encouraging strolling instead to ease congestion.

Interested in experiencing Japan and all its seasons from the comfort of your home? Sakuraco sends locally sourced, authentic Japanese snacks, sweets, and teas, from all over Japan straight to your door.

Don’t feel discouraged by the crowds however, as they have always been part of the sakura festivities and things are well organized. There are countless options nationwide when it comes to where you can go, with even most small public parks featuring cherry trees. Plenty of sakura spots have their own history or unique draw however, so let’s take a look at some of the most unique and famous places to see cherry blossoms in Japan.

Tokyo is the place where cherry blossoms became accessible to the masses, meaning there’s no shortage of hanami spots in Japan’s capital city. Among them however, Ueno Park sticks out. Its cherry blossom lined pond has famously been depicted by various woodblock print masters, and its roughly 1,000 sakura trees are known to bloom a bit earlier than elsewhere.

Getting a spot to set up a picnic here is notoriously difficult, but luckily the park is extremely strollable and festival stalls are at hand to keep you supplied with food and drinks. The park’s vast grounds also contain a number of museums and Tokyo’s biggest zoo to keep you busy.

For anyone looking to get out of the city, this hanami spot provides a particularly Japanese landscape. Nestled at the foothills of Mt Fuji in Tokyo’s neighboring Yamanashi Prefecture, this recently built pagoda looks like it’s floating in a sea of cherry blossoms. On clear days, Mt Fuji can be seen in the background, completing this picturesque Japanese setting.

Initially known to locals only, word among professional and amateur photographers alike spread quickly, increasing foot traffic quite a bit. Since the location is somewhat remote however, don’t expect huge crowds.

Japan’s ancient capital naturally has a lot of cherry blossom trees on offer, but few are as unique as the sakura lined ‘Philosopher’s Path’. Named after a Japanese philosopher who used to commute along the route daily, the path follows a winding canal entirely lined with sakura trees. Linking some of Japan’s most famous Zen Buddhist temples, the roughly two kilometer long path is strolled by millions every year and it is not hard to see why.

Even though it can get busy, this sakura spot retains a very local feel, partly due to the many small businesses alongside the path, which usually set up stalls just for the sakura season. Should you happen to miss peak bloom, the sakura petals flowing gently down the stream are a sight on their own, too.

Located in Japan’s northern prefecture of Aomori, this sakura spot is famous for its cherry blossom festival and the 19th century castle at its center. Due to the colder climate, the blossoms here usually don’t appear until the end of April, but that doesn’t make this festival any less popular. Normally a public park, there is a small entry fee for the sakura season.

Considered to be one of Japan’s top sights for cherry blossom viewing, the scale of the event seems to increase every year. Not only are the cherry blossom lined castle moats a sight to behold by themselves in the daytime, they are also beautifully illuminated at night. Combined with plenty of festival specific food like sakura mochi, this spot is well worth the trip to a less visited side of Japan.

Another public park, but with a twist: Over 1,000 free roaming deer. Nara was once Japan’s capital, making it home to several world heritage sites scattered throughout its expansive park. Deer are considered sacred in Japan’s shinto religion, as they are considered messengers of the gods.

This sakura spot is a little bit different to others, as the park’s grounds are expansive and feature thousands of trees scattered about, rather than planted in rows. It makes finding a spot much easier than elsewhere and one can also somewhat escape the crowds. You definitely want to be mindful of deer inviting themselves to your picnic however.

These are just a few famous examples, each with a little twist on the basic concept of hanami. There are many many more to be found, with the search all part of the fun. Many people find their favorite area and stick to it, with secret spots highly coveted.

Have you already taken part in cherry blossom viewing? If not, where would you like to go?

Let us know in the comments below!