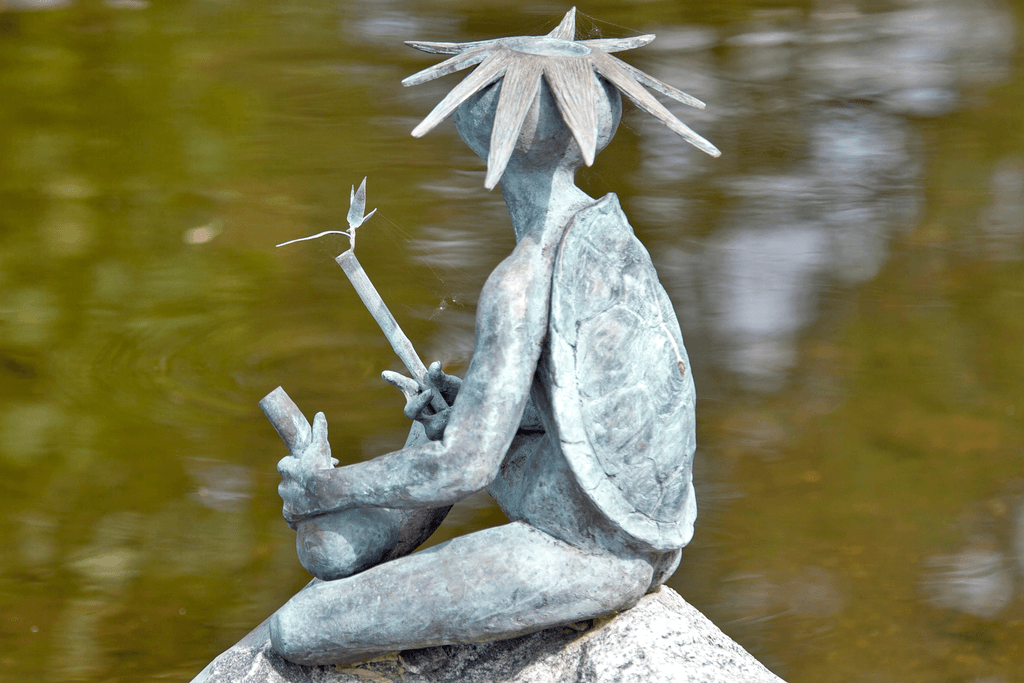 The Japanese kappa (known as 河童) is one of Japan’s best-known folklore characters. A type of Japanese yokai (a Japanese ghost, monster, or spirit that lives on the land, in places such as swamps, rivers and forests), this water deity is a scaly, aquatic creature that can be found in bodies of water and is said to be the size of a child.

As the kappa is found in water, it is known as a ‘suijin’ in Japanese, translated as water person. They are excellent swimmers and are believed to have magic powers. Depending on the story, they may even bewitch people into doing their bidding.

It is likely that there is no actual truth to the myth and that this creature is probably simply a tale to keep children from playing too close to the water. Even today, there are signs near bodies of water with pictures of the Japanese kappa’s face on them to keep people away.

But why are they so repulsive? Let’s have a closer look at the creepy kappa.

Kappa have been around in Japanese folktales since at least the Edo Period (1603-1867), but their exact origins are unknown. However, some say the Japanese giant salamander may have inspired the legend. They may have even been a part of Japanese mythology in some form since 720!

Around the end of the Edo Period, they started to take on similar characteristics, becoming the creature that we know today.

Kappa are said to be male, about the size of a small child, and often depicted with a monkey-like figure. They live in rivers and other bodies of water, waiting to prey on their unsuspecting victims. Generally said to be green, with scaly skin like a lizard or amphibian, they have also been spotted with long claws, webbed feet, and a turtle-like shell on their back.

These mischief makers also have a small metal plate on top of their head. In fact, they cannot go onto the land unless it fills the metal plate with water… a good tip in case you come face to face with a kappa that wants to hurt you!

What Does a Kappa Do?

First and foremost, a kappa is actually a demon. It is said that they are obsessed with a small ball that contains a person’s soul, found hidden in their… anus. Japanese myths call this the ‘shirikodama.’ To fuel this theory comes the stories that the kappa’s victims are found torn in that area, as this water demon sucked out the shirikodama.

According to legend, people cannot survive without their shirikodama, so taking this kills them. Another way the kappa kill people is by eating them – or trying, by pulling their hands and feet. There are also some common myths which talk about them trying to steal horses by dragging them into the river.

In addition to potentially killing, the kappas also have a mischievous side, doing things like looking up kimonos as people enter the water. They also love sumo wrestling, and will happily take on anyone who challenges them to a sumo fight.

And they aren’t always bad. An interesting part of the legend is that they taught bone-setting to the Japanese. If someone encounters a kappa and manages to catch it, the water demon will teach them how to irrigate their land if they are a farmer or teach them how to set broken bones.

How to Beat a Kappa?

Much like the kitsune (fox), this water creature has its weaknesses. Kappas live in water and are excellent swimmers, so it is no use trying to outswim one. However, when they are on land, it is a little different.

If a kappa tries to capture somebody by coming out of the river, make them bow. These mischievous creatures are fiercely polite creatures and will always return a long, deep bow. By doing this out of the water, they will tip all of the water out of the small plate on their head.

When this happens, the kappa will be rendered completely helpless, unable to do anything until it gets its water plate filled again. They will be immediately indebted to the person who refills the plate and will remain their servant forever.

Another way to beat a kappa was actually widely practiced at one point in history. This involved eating cucumbers before heading into any river, to ward off any water demons that might be residing there. In Edo Tokyo, some houses even wrote the names of each person on a cucumber and sent the cucumbers down the river, to keep away the kappas.

Signs denoting the kappa are often found around rivers and lakes, warning people not to play near the bodies of water. Big pictures of kappa-like creatures will often be accompanied by words such as ‘Beware! Don’t enter the water!’, or even simply, ‘Beware of the Kappa!’ All Japanese children, even if they can’t read properly yet, will know the kappa picture.

As we learned above, the kappa love cucumbers. In fact, cucumber is said to be their favorite food of all.

For that reason, you will be able to spot a type of kappa in sushi restaurants. Yes, ‘kappa sushi’ is cucumber sushi rolls! Next time you’re in a sushi shop, make sure you try some if you have the chance.

Feel prepared for your next Japanese kappa encounter? Or ready to enjoy some kappa sushi? Let us know in the comments below!