The Dramatic History of the Sumidagawa Fireworks Festival 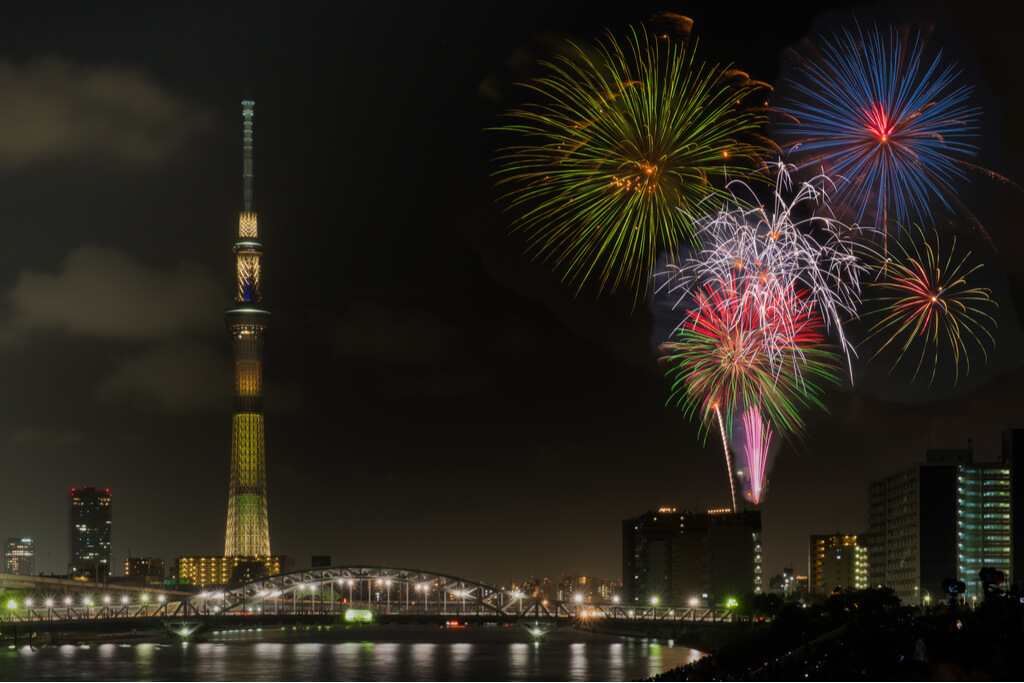 Dating back to 1733, this impressive fireworks competition is a yearly tradition in Tokyo. But from fire to famine, this event’s history is anything but smooth. Come with us as we explore the twists and turns of this historic event that takes place on the last Saturday of July, along the banks of the Sumida River.

Bringing Together the Best in Pyrotechnics

The Sumidagawa Fireworks Festival is the highlight of Tokyo summer for any fireworks fan. The best pyrotechnical teams battle it out to create the most amazing displays. Since the event is so prestigious, some companies develop new types of fireworks and wait to showcase them specifically at this event.

From amazing color combinations, to successive explosions, to shapes, Tokyoites are treated to a 90-minute feast for the eyes.

A Festival after a Famine

From 1732-33, the devastating Kyōhō Famine ravaged the island of Kyushu and the estimated number of people who died due to starvation ranges widely from 12,000 to 169,000. Although the cause is still unclear, it is hypothesized that a combination of increased taxes on agriculture, lack of crop diversification, and heavy rains culminated in a collapse of food supplies.

After the famine ended, it is rumored that the ruling Tokugawa Shogun in Edo was instrumental in adding fireworks displays to the Day of the Dead festivities. This provided a much needed distraction from the economic crisis and wide-spread poverty in the country.

Originally, the fireworks display was called the Ryogoku Kawabiraki and was an established yearly tradition by 1810. Ryogoku refers to the area around Tokyo, kawabiraki means “river event”. With each year, the event became more elaborate and a rivalry between two fireworks guilds emerged: The Tamaya and the Kagiya. In an attempt to one-up each other, the guilds would put on more and more impressive displays each year, and as a result, the number of onlookers would increase.

Initially, the Tamaya Guild was more popular, but tragedy struck in 1843 when the guild accidentally caused a major fire during the festival. It was after this point that the festival was moved to a more remote location, away from the city, for safety reasons. At this time, most Japanese buildings were made of wood and a fire could quickly sweep through a neighborhood and wipe everything out.

Even though the Sumidagawa Fireworks Festival survived the widespread reforms and changes of the Meiji Restoration, in the 1920’s it could no longer attract the crowds needed and thus was held less and less frequently. Then, during the Second World War, it was halted entirely and was only re-started in 1978.

Since that time, the citizens of Tokyo have gathered every single year without exception to be awed and entertained by the explosive displays in the nighttime sky.

A Tradition for Modern Times

Nowadays, the festival garners a lot of attention both inside and outside of Japan. People flock to the banks of the Sumida River hours in advance to reserve the best spot for viewing the competition, often making a whole day of it with their friends and family.

Once you exit any of the metro stations along the riverside, food stalls await you offering up all of the favorite festival delights: grilled meat and corn, okonomiyaki, choco bananas, crepes, the list goes on and on.

Have you ever attended a fireworks festival? Does this kind of event exist in your country? Let us know in the comments below!