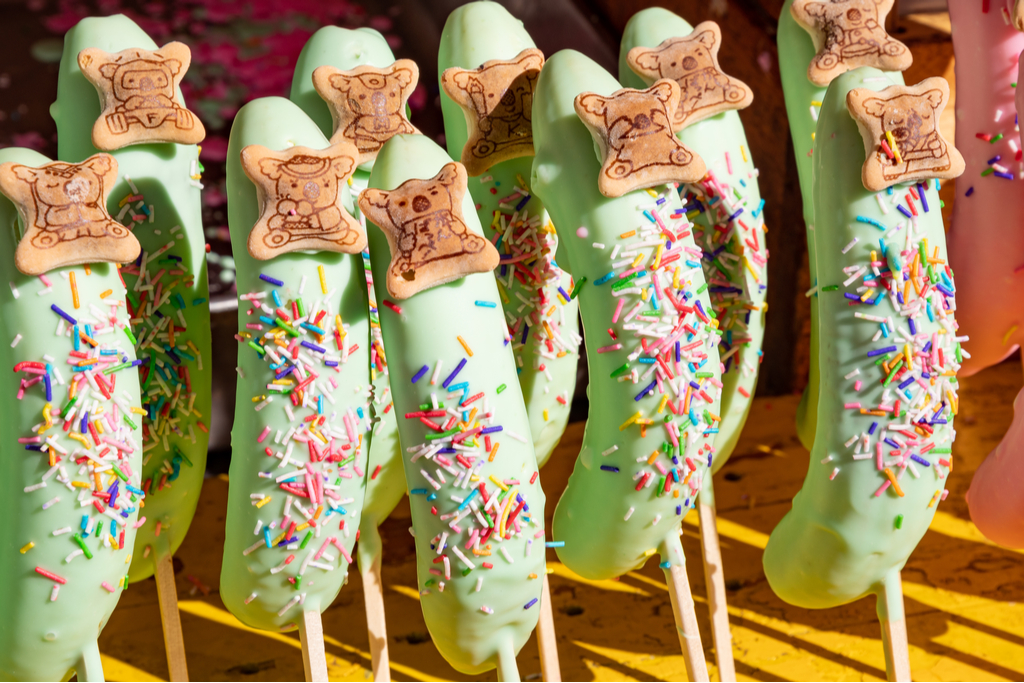 Strolling down the food stall-lined streets of a Japanese matsuri, you are sure to spot one of the more curious delicacies: choco bananas. Often lined up next to the candied fruits and cotton candy, this festival treat is a staple, often decorated with fun designs and colors that catch your eye. But where did it come from? Read more to find out about this fruity, chocolaty confectionery.

What is a Choco Banana?

Called either choco banana or banana choco, these fun treats are simply made by dipping a full banana on a skewer in melted chocolate and then letting it harden. Sometimes simply decorated with sprinkles, other times coated in colored white chocolate and adorned with toppings, these playful treats are enjoyed by people of all ages.

Chocolate is now a beloved sweet in Japan but it was not always this way. Chocolate was first introduced to the country in the 1870’s when Japan first emerged from its self-imposed isolation and sent out leading politicians and intellectuals to visit Europe in order to learn how Japan could become an industrialized nation. One of the stops on their trip was a chocolate factory, and the visitors were amazed at the scale of production, as well as the flavor of this never-before-seen confectionery. However, it would take almost a century, until the 1960’s before chocolate became the favorite sweet in Japan and was affordable to the majority of the population.

Which brings us to choco bananas. The origins of this dessert are a bit unclear, with claims they were invented in Newport or are a common El Salvadoran street food. So the most likely explanation for the sudden appearance of this now festival favorite is from either American troops stationed in Japan or South American immigrants.

It should also be noted that eating a whole cucumber on a stick is also a common festival food, so the image of a whole skewered banana likely wasn’t that much of a shock.

While perhaps the original chocolate covered bananas were simple whole bananas dipped in dark or milk chocolate, the current version of this sweet has become much more elaborate.

It’s not unusual for vendors now to use dyed white chocolate in bright colors along with crazy amounts of toppings. In more recent years, vendors have gone one step further and decorate the bananas to look like popular children’s characters, from Minions, to Doraemon, to Hello Kitty.

Making Your Own at Home

While not everyone has the chance to visit a Japanese festival in person, they can still experience some of the favorite foods at home. Chocolate bananas are actually one of the easiest treats to prepare and simply involve freezing whole, peeled bananas, dipping them in melted chocolate (dark, milk, white, or ruby), and then adding the toppings of one’s choice.

It may not be quite the same without the full festival atmosphere, but it’s still a wonderful summer indulgence.

Possible Inspiration for a Tokyo Classic

In Tokyo, there is an especially popular souvenir called “Tokyo Banana” that was created in 1991. A rich banana custard wrapped in light sponge cake, this confectionery has become a must-try for anyone visiting the metropolis. And as banana is not a traditional flavor or a fruit that is native to the island of Honshu, it stands to reason that choco bananas were a likely source of inspiration.

From Modern to Traditional

In a beautiful combination of old meets new, traditional snack makers have been inspired by the popularity of banana as a confectionery flavor and now make wagashi (traditional Japanese desserts) featuring the tropical fruit. This banana manju is made with a sweet white bean and banana filling, wrapped in millet flour-dough, and playfully shaped like the fruit.

Have you ever tried a choco banana? Would you go for classic dark or milk chocolate, or something a bit more elaborate?