All About Mochi Donuts 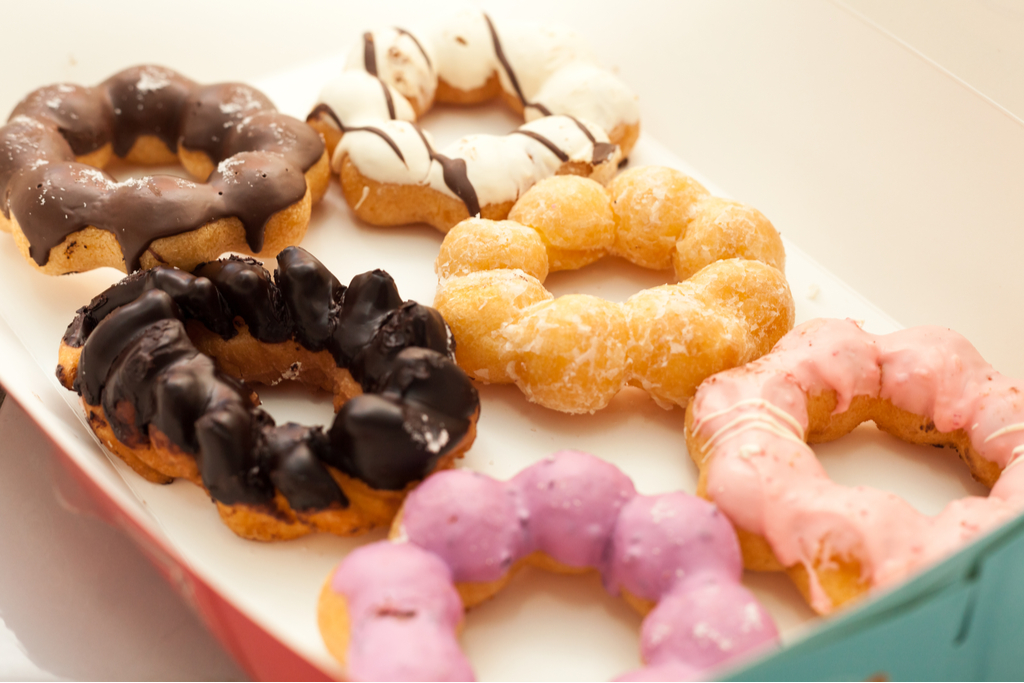 Donuts are as American as apple pie, but somehow, an American donut chain has been reigning supreme for decades in Japan: Mister Donut. Selling everything from donuts, to dim sum (for real!), to pasta, this chain is always capturing the media spotlight with their delicious creations, most famously: Pon de Ring donuts.

Mister Donut was founded way back in 1956 in Boston, Massachusetts by Harry Winokur. Donuts seem to have been a family tradition since Harry’s brother-in-law William Rosenberg also founded his own franchise: Dunkin’ Donuts. Mister Donut was instantly popular and quickly became a successful franchise across the U.S.

In 1971, the franchise expanded into Japan, with the first outlet in Minoh, Osaka. However, the products needed to be adjusted before entering the Japanese market.

Donuts were first introduced to Japan after the Second World War (1939-1945) via American soldiers stationed in Okinawa, but initially were considered a dessert for children, lacking the elegance and sophistication of wagashi, Japanese desserts. Because of this, changes were made to the Mister Donut recipes and presentation in order to appeal to the Japanese customer base. It was a success and the franchise quickly became a sensation with outlets quickly popping up across the country.

Interested in Japanese sweets? Experience delightful tastes & textures from Sakuraco – a teatime experience sent straight from Japan to your home.

The titular item at Mister Donut, these fun desserts have an unclear origin story, involving Japan, Hawaii and Brazil. Possibly inspired by poi mochi, invented in Hawaii in 1992 and made with a base of taro and mochi, Pon de Ring donuts were first introduced in 2003. The name is a spin on “Pao de queijio”, a Brazilian cheese bread made with tapioca powder with a similar appearance.

Although the first release of Pon de Ring donuts were only offered with a simple sugar glaze, Mister Donut wasted no time experimenting with new flavors. Along with limited-edition and seasonal flavors, the now classic options for Pon de Ring donuts include:

They also created a cream-filled version called Pon de Angel that has since become a staple at all Mister Donut locations.

What are they made of?

Yes, they are often referred to as “mochi donuts” because of their soft mochi mochi texture, but the original Pon de Ring donuts don’t actually contain any mochi. Instead, according to the company, the donuts are made with a combination of wheat and tapioca flour.

Sounds good? One of our staff went to check out the collection last year and sampled her way through some of these wagashi-inspired donuts:

Along with seasonal flavors and designs, Mister Donut is also known for their collaborations. In January 2020, they did a limited release with the French pastry chef and chocolatier Pierre Hermé. The collection included 6 elegant donuts, one of which was the “Pon de Ispahan”. Ispahan is a pink pastry made with rose, raspberry, and lychee and this donut had all of those luscious flavors but in mochi donut form.

The Pon de Ispahan was filled with a rose and lychee infused cream and was coated in a raspberry glaze with chocolate and raspberry pieces as a garnish. Fluffy, chewy, and bursting with flavor, this beautiful pink donut was only about 2$ and quickly sold out.

Japan has a love affair with mascots. Everyone, from municipal governments to banks, has their own mascot, with cute characters appearing on all of their branding. Although Mister Donut already has a mustachioed chef included in the brand logo, they also have a host of characters based around their donuts. The most famous of which is the adorable “Pon de Lion”.

The character is a lion sporting a mane made of the Pon de Ring donut. For the Mister Donut fan, there is plenty of merchandise featuring the character and even Pon de Lion donuts pop up in shops from time to time.

Around 2019, mochi donuts started appearing in the major cities in the continental U.S., from Seattle, to San Francisco, to New York City. Even though mochi donuts had already been popular in Hawaii for over a decade at this point, the rest of the country was finally getting on board.

Part of the trend was largely aided by the instagrammable quality of the dessert and the creativity of bakeries with their flavor and color combinations. From multi-colored cereals, to rocky road, to boozy editions, it seems there is no end in sight!

For those lucky enough to travel to Japan, a visit to Mister Donut is often on the culinary bucket list. But for those unable to make the journey, there is always the option to make your own Pon de Ring at home. Although donut making is not for the faint of heart, this brave blogger has mapped out all the steps you need to make the ultimate homemade Pon de Ring!