The Secret Behind Delicious Japanese Donuts 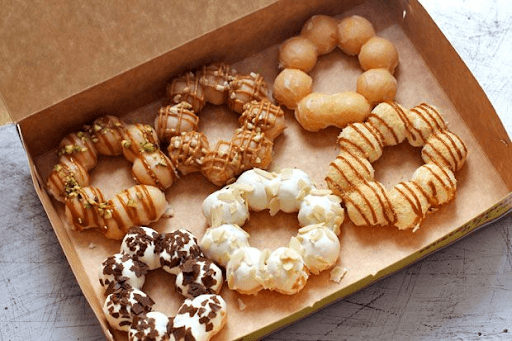 Although donuts didn’t originate from Japan, there are several varieties of the beloved golden brown ring-shaped sweets that are unique to the country.

One of the most popular donut store chains in Japan is Mister Donut; they can be found in almost any lively shopping district alongside cafes and restaurants.

Perhaps the type of donut that’s most often associated with their brand in Japan is Mister Donut’s signature Pon de Ring donut. It has an instantly recognizable shape, which kind of looks like a bunch of smaller round donuts stuck together to form the shape of a ring. Any one of their branches will always have them available, and they’re pretty inexpensive, which helps cement their status as a nice, sweet snack for everybody.

One of the main differences between these two types of Japanese donuts lies in the dry ingredients used for them.

For Pon de Ring donuts, according to the official recipe from Mister Donut Japan, they are made using either tapioca flour or wheat flour. On the other hand, mochi donuts are made using glutinous rice flour, which is the same type of flour used to make actual mochi, which is why they’re named the way they are.

Next, let’s take a more detailed look at the ingredients needed to make a Pon de Ring donut.

To recreate these famous Japanese donuts, we have the usual dry ingredients used in many baking recipes, like baking powder, sugar, salt, and for the yeast dough, it is recommended to use instant yeast to make the baking process simpler and less time-consuming.

As we mentioned earlier, the secret to Pon de Ring donuts lies in the flour used for them. The recipe for Mister Donut is said to use tapioca flour, but since they typically use machines that automatically shape the donuts and are meant to create huge batches, there will need to be some adjustments in the recipe for the home chefs who are trying this on their own.

Experience Japanese donuts and other sweets with Sakuraco – a traditional Japanese snack box delivered to your door every month.

If you want to make Pon de Ring donuts that are as close as possible to the original recipe, while also not causing you any headaches when you’re shaping them into those iconic rings, you can use around a 60/40 mixture of tapioca flour and plain or all purpose flour. While tapioca flour in itself is gluten free, if gluten is something you might be concerned about, you can easily substitute the all purpose flour with a gluten free version of your choosing.

However, if you want to step it up a notch, another alternative recipe makes use of all-purpose flour, tapioca starch (not flour), potato starch, and a slightly unusual wet ingredient that we’ll get into in a little bit.

Finally, we are at the part where we get to make Pon de Ring donuts (and proceed to try them if you’ve never had one before).

Once you have all the ingredients mixed together and you have a dough that has a nice consistency to it, it’s time to shape the donuts. The standard look for a Pon de Ring donuts is made up of 8 small balls that form a ring. Place the balls on top of cut parchment paper sheets that are just a little bit bigger than the size of your donut. The size all depends on your preference, as long as you can make the balls as even as possible.

Since these are famously deep fried Japanese donuts, the next course of action is frying the donuts. You can use vegetable oil for this, and after you’ve heated it up to around 160 to 170 C, you can slowly place the donuts onto the hot oil while they’re still on top of the parchment paper. Wait around 2 minutes on each side when frying, or at least until both sides are golden brown.

Once both sides are done, you can grab the donuts with tongs and place them on a paper towel to cool and get rid of the excess oil at the same time. Last but not the least, you get to add your favorite flavor to your donuts! While you can always go for the plain ones, it’s also fun to make ones that are strawberry glazed or even matcha glazed for that extra Japanese flavor.

Now you know the secrets behind one of the most popular Japanese donuts! Even if you might not be able to make a trip to a Mister Donut in Japan to get the real thing, we hope you’ll give these a try for a sweet, delectable snack at home.