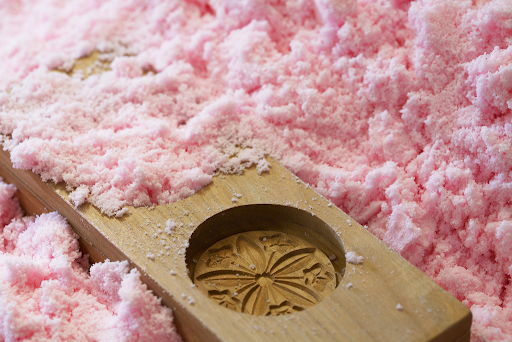 Japanese snacks have been getting more popular worldwide, and even traditional Japanese sweets like mochi are less of a mystery than a few years ago. There are however still a lot of secrets left to traditional wagashi sweets, one of them being Japan’s very own unique sugar.

The history of wasanbon begins in the Edo period (1603 – 1867), about 200 years ago. Even though the country was closed off to foreign visitors at the time, what little trade there was had  already introduced Japan to sugar. The eighth shogun Yoshimune Tokugawa expressed an interest in cultivating sugarcane in Japan, and stipends were given out to domains willing to try.

These two prefectures are still the only ones producing wasanbon today, although the volume of production has decreased significantly. Since the sales of Western sweets have effectively overtaken Japanese ones, cheap refined white sugar tends to be the go to choice.

What’s Different About It?

Most makers of traditional Japanese sweets, so-called wagashi, still rely on wasanbon. Considering they owe their existence to it, this is hardly a surprising fact. It’s said that before the arrival of wasanbon the sweetest food in Japan were persimmons.

Wasanbon’s sweetness lasts shorter than that of regular white sugar, which tends to linger for a while. This perfectly suits wagashi, which were created to compliment the taste of matcha tea, rather than have too strong of a distracting taste themselves.

What’s In A Name?

The process that makes wasanbon unique is in its name. Wa means Japanese, san the number three, and bon in this case refers to trays. To make this rare sugar, a craftsman or -woman will mix water with the raw, black sugar and knead it by hand on a wooden tray.

The sugary juice created through this process is removed and the kneading repeated another two times. This process takes around 20 days, and removes so much material that only about 40% of the original amount remains.

The labor intensive process is still performed in the same way, to give the sugar it’s fine grain and taste by eliminating impurities. The result is a very fine-grained sugar that can be used just like any other sugar, but really shines when worked into traditional Japanese tea sweets.

Where Does It End Up?

While wasanbon is used to sweeten tea, coffee or even in cakes these days, it’s primarily known as the main ingredient in a traditional Japanese sweet called higashi. Higashi are dry sweets, made by mixing wasanbon with coloring, rice flour and a small amount of water, then pressing it into shape by using a wooden mold.

The fine grains of wasanbon allow for intricate detail, which is used to represent seasonal motifs like flowers or animals in the final product. The resulting higashi compliment the slightly bitter matcha they are served with not just in their mild, melty sweetness, but also in their appearance.

While higashi are most closely associated with wasanbon, any other wagashi can benefit from its characteristics as well. Makers of yokan, a traditional Japanese jelly made from sweet red beans, have grown especially fond of it. Somewhat unexpectedly, some high class sushi restaurants have also started it to amplify the taste of certain ingredients.

The possibilities are endless, but at more than three times the price of regular sugar, you probably won’t be replacing all your regular white sugar with it anytime soon. If you get a chance however, we highly recommend giving it a try, whether as a wagashi or to sweeten up your drink.

Have you already encountered wasanbon before? What did you think? If not, is it on your list for your next visit?