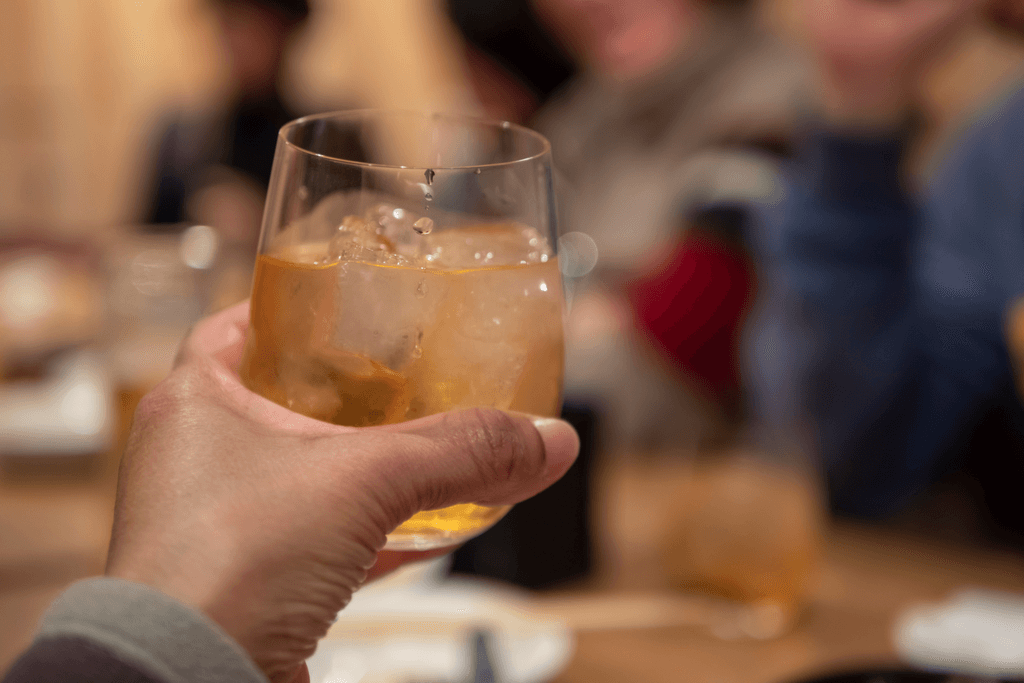 When talking about traditional Japanese alcohol, many people think of Japanese sake (rice wine). However, another popular drink that many people fall in love with is the popular Japanese plum wine. A popular aperitif (a drink usually served before a meal) that pairs well with Japanese food, Japanese plum wine or umeshu is a sweet, fruity liqueur that is well known for its refreshing and delicious taste.

Let us tell you all about this historically delicious drink.

What is Plum Wine

Japanese plum wine is a popular liqueur made by steeping green, unripe Japanese plums in a strong distilled alcohol with sugar. The resulting alcohol is a refreshing, sweet and sour drink that has been enjoyed for over hundreds of years in Japan.

In fact, Japanese plum wine has been recorded in the culinary historical text, Honcho-Shokkan (The Culinary Mirror of the Realm), written in 1695 and was lauded for its medicinal properties. It was said that umeshu was good for relieving things like sore throats, aching muscles, colds, and more. It was also said to improve appetites among other things. Japanese plums in general were also valued for their medicinal traits.

Japanese plum wine is enjoyed all over Japan, like in izakayas (Japanese pubs) or ryokan (traditional Japanese inns). And thanks to its simple recipe, many Japanese families make their own homemade plum wine each year during the May and June harvest season, storing it in a dark place.

By storing them in dark places for a long period of time, it allows the plums’ flavor to be extracted so they can share the final product with family and friends. Due to the high ABV, the flavor of the plum wine will continue to mature and change, so it is common for some Japanese grandparents to have decade-old plum wine.

Looking for a snack to enjoy with your traditional drink? Check out Sakuraco! Sakuraco sends traditional Japanese snacks, sweets, and teas from local Japanese makers straight to you! Pairs perfectly with anything you want to drink it with, Japanese plum wine or otherwise!

The English translation for umeshu, plum wine, is actually a bit misleading. The word umeshu comes from two Japanese words, ume (梅) and shu (酒). What is ume? Well, the common translation for it is Japanese plum, but the fruit is more closely related to the apricot.

Between 2002 and 2011, the production of Japanese plum wine increased while the harvest of ume remained the same. The reason this happened was because the production of Gosei Umeshu, or synthetic plum wine, increased. Gosei Umeshu refers to plum wine that was created with artificial flavours and is often deemed a lower quality than Honkaku Umeshu (authentic umeshu). Today, Honkaku Umeshu are labelled as such to denote their quality.

These are the big chunky sugar crystals that can be commonly found in local Asian grocery stores. The rock sugar is added into a large glass jar or container in alternating layers along with the plums. Rock sugar takes a long time to dissolve and plays a big part in drawing out the flavor and essence of the plums.

If the sugar dissolves too quickly, only the moisture of the plums will be extracted. Honey, brown sugar, fructose, and granulated sugar can also be substituted, although these tend to accumulate at the bottom of the jar.

In Japan, there is an alcohol that is usually sold for the purpose of making Japanese plum wine. It is called ‘White Liquor’ and has an 35% ABV. It is tasteless and odorless, making it perfect for the plums to influence it with their flavour.

The high alcohol content also prevents any spoilage and will eventually go down as the plum juice is extracted over time. Shochu (a Japanese distilled spirit made from potato) can also be used as an easy-access substitute. If you’re looking to make umeshu at home, vodka or any other liquor above 35% ABV is fine as well.

Green ume plums are unripe and not for human consumption. They have a firm texture and an almost glossy sheen to them. They are also said to taste tart and bitter when eaten raw. These plums are usually found in local Japanese supermarkets between May and June.

Ripe plums can also be used to make plum wine, although the flavor profile of the resulting liqueur is significantly different than with unripe plums.

How To Drink Plum Wine

Plum wine is known for being very versatile when it comes to its drinking methods. It can be served at all temperatures, on the rocks, with soda water, tonic water, slightly diluted with water, and even with tea.

Some bartenders have even started using plum wine in their cocktail recipes as well.

The possibilities are endless with delicious plum liqueur!

Have you ever tried Japanese plum wine? How about making it? Let us know about your experience in the comments below!