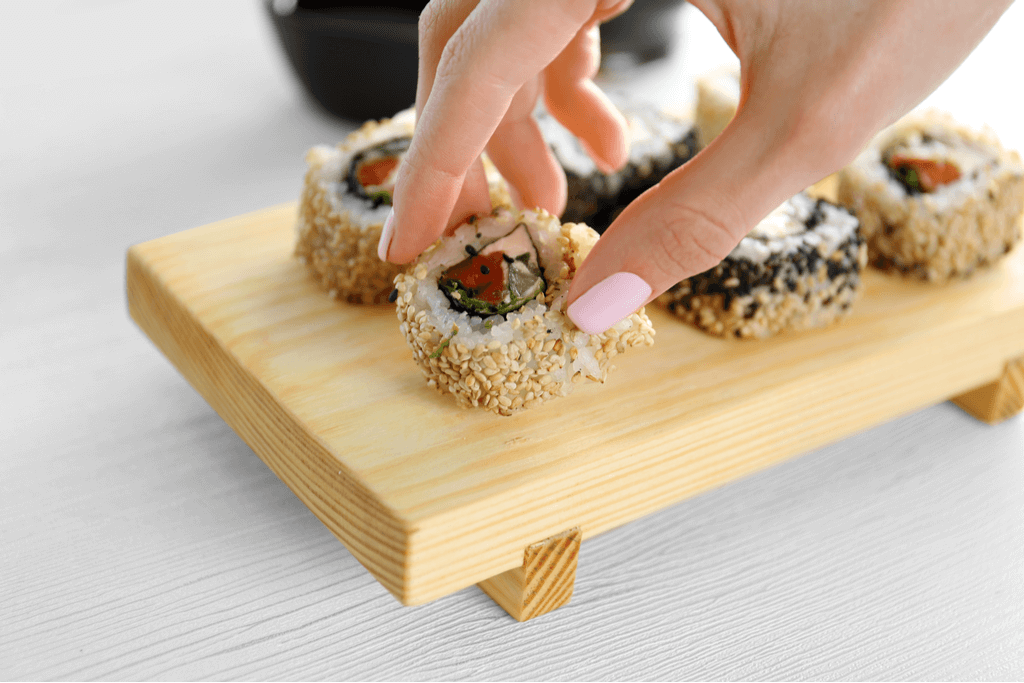 Sushi: perhaps the most famous offering that Japan has given to the international culinary scene. But how do you eat it? Do you use chopsticks or do you eat it with your hands? The answer is just as complex as sushi, and how to eat sushi, itself.

Just like many great foods, sushi’s simplistic style doesn’t show its actual complexity. It is more than just pressing raw fish onto rice and calling it a day. The same goes for sushi etiquette, which is its own subset of Japanese table manners in general. Let’s learn all about it.

How to Eat Sushi Based on the Style

Nigirizushi (or nigiri sushi) is one of two presentations that most people picture when they think of sushi. The chef presses a small amount of sushi rice (shari) into an oblong shape in their palm before pressing a topping (neta) over it with two fingers.

The chef might also place a dab of wasabi in between the topping and rice or brush a secret sauce blend over the topping if required. Other toppings might also have a thin strip of seaweed (nori) to hold the rice and topping together.

Most chefs recommend eating nigirizushi with your hands, especially if you’re at a sushi restaurant. The rice should be loosely packed and might break if held tightly with chopsticks. Kaitenzushi (conveyor belt sushi) and all-you-can-eat restaurants may use sushi rice machines, packing the rice more firmly, allowing customers to use chopsticks instead.

Want to make sure you don’t offend at kaitenzushi? Learn all about Japanese conveyor belt sushi etiquette here!

When eating nigirizushi, take it in your hand and flip it over (fish side down), before dipping the fish in the soy sauce (lightly) and placing it into your mouth. The fish side should contact your tongue first with the rice completing the bite. You should also eat it in a single bite. Also, the soy sauce shouldn’t touch the rice as this will break down the rice’s integrity, causing it to break apart.

Nigirizushi has spawned several subtypes throughout its history, like:

Want to experience the flavors of Japan right in your home? Try out Sakuraco! We can’t send sushi, but Sakuraco will send you delicious, locally-sourced traditional Japanese snacks, sweets, teas, and even kitchenware, so you can experience Japan wherever you are!

This is another style that people picture when they think of sushi. Makizushi are usually made in layers with a sheet of nori at the bottom, rice in the middle, and the filling on top. It is then formed using a flexible bamboo mat.

This type of sushi is normally eaten with your chopsticks. It is often served at the end of a set course and should be eaten as soon as possible to fully enjoy the crispiness of the seaweed.

Like nigirizushi, makizushi is one of the more diverse styles of sushi, with several different subtypes including, but not limited to:

Another subtype of makizushi, this style looks like an ice cream cone. The nori is wrapped around the rice and fillings, and the fillings spill out of the open end of the cone. As the name implies, this style of sushi is eaten with your hands.

Like makizushi, temaki should be eaten immediately as the nori softens the longer it is left out.

In this style, vinegared rice is scooped into a bowl and served with a variety of fish and vegetable toppings. What makes this dish different from kaisendon (rice bowl topped with raw fish) is the vinegared rice. There are different regional styles of this dish and the placement and presentation of the fish changes according to the region. This style of sushi is eaten with chopsticks.

Also known as hakosushi (boxed sushi), this style originates from the Kansai region and is a favorite in Osaka. Using a plastic or wooden mold, the sushi chef places the toppings at the bottom of the mold and layers rice on top before pressing down with the lid to make a block. The block is then cut into bite-sized pieces and served to customers. This style of sushi can be eaten with your hands or chopsticks.

Is There an Order to Eat the Sushi?

Not exactly. Everyone is free to eat their sushi in whichever and whatever way they please, but sushi chefs will usually serve you in this order: fish with light flavor, fish with heavier flavor, fatty fish, sweeter options, tamagoyaki (sweet grilled egg), nigirizushi, and makizushi.

If you are ordering omakase (chef’s choice), then the chef will provide you with his set course menu for the day. The menu might be different each time you visit due to availability and market prices. It is recommended to eat the sushi as soon as the chef places it in front of you.

What About Wasabi (Japanese Horseradish)?

If you’re eating at a restaurant or standing bar, the chef will already place the perfect amount of wasabi inside your sushi. If you don’t want wasabi, you can tell the chef that you’d like your sushi without wasabi.

Well, if you really need more, there should be a small amount of wasabi for you to place on top of the fish portion of your sushi.

If you mix a copious amount of wasabi with a large amount of soy sauce to dunk your sushi in, you may break your sushi chef’s heart and general sushi etiquette.

Contrary to popular opinion, pickled ginger isn’t actually a part of the meal. It’s more of a palate cleanser, allowing you to fully enjoy the subtle flavor of the chef’s offering. You can eat a piece of ginger in between each piece of sushi.

Kind of. Soy sauce is called murasaki (purple) at sushi restaurants because in the old imperial court, they used the word to describe something that was similarly colored to soy sauce. Another reason could be that soy sauce used to be expensive, and many expensive things were wrapped in purple cloth.

However, soy sauce is only referred to as murasaki by the chefs. Think of it as code for the trade. Customers usually refer to soy sauce by the regular Japanese word, “shoyu.” Other codewords include “namida” (tears), which means ‘wasabi’ among sushi chefs.

Uramaki or inside-out rolls are more common outside of Japan. The sushi rolls have the rice on the outside and the nori wrapped around the filling directly. The reason for this is that it was believed that some people would be grossed out by the nori and not want to eat it. So, the idea to hide nori underneath the rice was born.

Have you mastered how to eat sushi? Which style of sushi do you prefer? Tell us in the comments below!