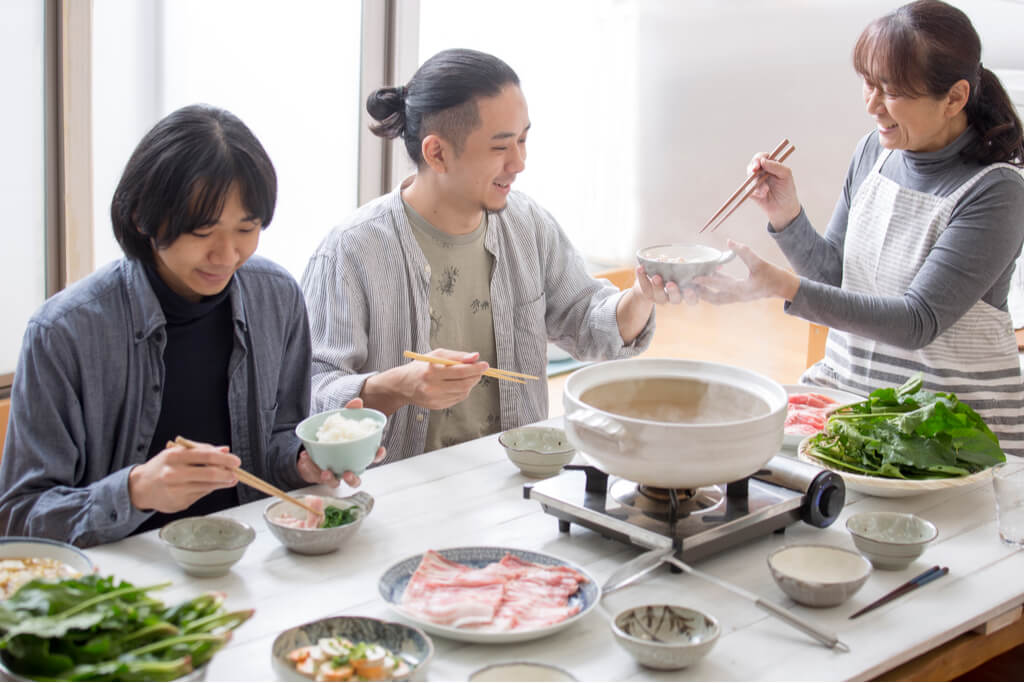 Whenever you visit a new place, it can be very reassuring to have a basic grasp of the local table manners and Japan is no exception. In fact, Japanese table manners are very important in Japan, not just for your own image or impression on others, but for the comfort of those around you.

Read on to find out about Japanese etiquette rules and how to avoid any faux-pas, such as signaling death or conjuring up images of a funeral.

Start of the meal

When dining out, you will receive a small hand towel, or ‘oshibori’ in Japanese. Contrary to what you may think, this is not for your face or neck. It is for you to wipe your hands. According to dining etiquette, it is important to be clean at the table, and the oshibori is the final step to ensure complete cleanliness.

In Japanese culture, it is important to express gratitude for the food you are given. Do this by saying ‘itadakimasu’ before eating as the customary way to convey both ‘let’s start eating’ as well as ‘thank you for the food’. You may have seen this on the Japanese reality show Terrace House.

It is considered good manners to start eating together. However, if you are served first and the food is better eaten quickly, like hot soba (buckwheat noodles), you can say ‘osaki ni’ which means ‘excuse me, I’ll start first.’ If the same is true for one of your dining partners, you can tell them to ‘go ahead’ by saying ‘osaki ni douzo.’

Want to practice your Japanese table manners? Practice with traditional Japanese sweets and teas sent right to your door by Sakuraco!

When eating, try to pay attention to chopsticks etiquette. It’s an important part of Japanese table manners. Of course, no one expects you to be perfect, but following the below tips, on top of knowing how to use chopsticks, might leave your hosts impressed.

When not using the chopsticks, rest them on top of your bowl or small plate, or neatly return them to the chopsticks rest, or ‘hashi-oki’, a common part of any Japanese table setting. If not, you may have people ducking for cover.

Another definite no-no at the Japanese table is pointing your chopsticks straight up in the bowl of rice. This is reminiscent of the incense pointing straight up at Buddhist funerals and may cause shock among your fellow diners.

It is considered bad manners to pass food using chopsticks themselves. At the Japanese dining table, this can remind diners of the passing of ashes at a funeral, so avoid it if you can. Instead, pass the plate or bowl itself.

If there is food to share at the table and no dedicated serving utensils, use the opposite end of your chopsticks. Likewise, if you’re having food that requires a dipping bowl amongst diners, such as kushi-katsu (deep-fried meat and vegetable skewers): don’t double dip! This is mainly a hygiene thing, and especially in this day and age, it’s a good idea to heed this one.

Recently, more restaurants have been providing disposable chopsticks for diners. Contrary to popular belief, when separating the wooden chopsticks, it is a bad idea to rub them together before using them – you may get splinters or insult the restaurant.

One of our tips to avoid embarrassment at the Japanese table: when eating rice, hold the bowl under your mouth, near the table. This way you can catch any falling rice in the bowl.

The concept of Japanese food is all about balance. In fact, at the core of Japanese cuisine is the idea of ‘ichiju-sansai’ which means ‘one soup, three dishes.’ This is part of the reason why miso soup is a given in many restaurants.

Alongside miso soup comes proper etiquette. As a part of Japanese table manners, hold the soup bowl in one hand and drink the liquid straight from the bowl, picking out the solids, such as tofu or wakame (Japanese kelp), with your chopsticks as you go.

Etiquette in Japan dictates that when you have a small bowl containing liquid you should drink directly from it. If it is a bigger/heavier bowl, such as a ramen (wheat noodles) bowl, there will more often than not be a ceramic spoon, or ‘renge’, included so you can use this instead.

When eating ramen, soba, or udon (thick wheat flour noodles), it is proper etiquette to slurp your noodles as you eat, no matter where you stand in the ramen vs. soba vs. udon debate. The sound not only indicates enjoyment but there is a scientific reason behind it too. Slurping the noodles means sucking air into your mouth which enhances the taste.

Think of swirling wine around your glass to release its aroma. The concept is largely the same!

You may have witnessed people saying ‘umai’ (tasty) in a loud voice when taking the first bite of food. This is to indicate to the chef that you appreciate their cooking. You can also say ‘oishii’ (delicious), which is slightly more polite, or ‘oishii-desu’ (It’s delicious) for a formal setting.

When you’ve finished your meal, put your chopsticks back to their original position, uncrossed. Maybe on the hashi-oki or on the table. This shows the server or your host that you have finished eating.

Of course, different types of food have different etiquette rules; eating sushi is different to having yakiniku (Japanese-style barbecue), and so on, but the basics are the same. We hope you’ve learned a lot from this article.

Let us know in the comments below if you’ve noticed any other rules or if anything surprised you!