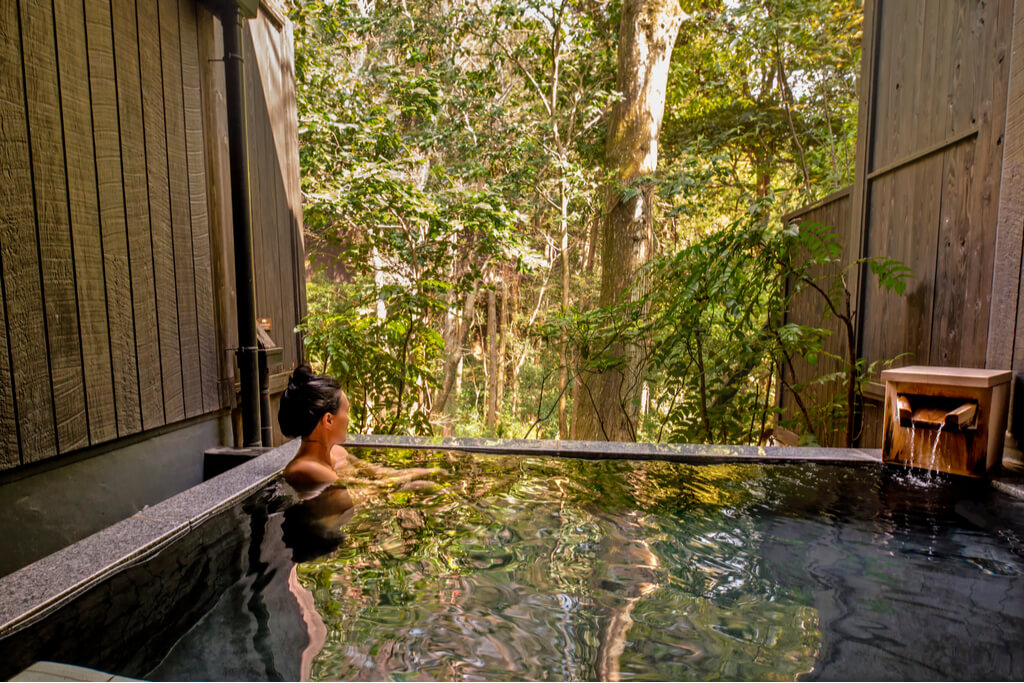 Less than 100 kilometers away from Tokyo and nestled in the Fuji-Hakone-Izu National Park, the town of Hakone is renowned throughout Japan for its natural beauty, views of Mount Fuji and Ashinoko, and the numerous Hakone onsen (hot spring) baths. Each year, thousands upon thousands of domestic and international visitors flock towards the small onsen town looking for a break from the bustling cities.

Under the Japanese Hot Springs Act (onsenho), onsen are defined as hot water, mineral water, water vapor, and other gas gushing out from the ground with temperatures of at least 25℃ (77℉) or a certain amount of one of nineteen mineral substances.

Hakone’s onsen are heated by the ongoing hydrothermal activity of Mount Hakone, an active volcano worshipped in the past. During the Edo period, Hakone had seven natural onsen, and this number slowly increased throughout the Meiji and Showa periods.

Located at the foot of Mt. Yusakayama, Hakone Yumoto Onsen is the oldest hot spring in Hakone, having been opened since 738. Considered the ‘Gateway into Hakone’, travelers arrive at the Hakone Yumoto Station from Shinjuku via the Odakyu Romance Car, Hakone Tozan Railway, or bus. Today, Hakone Yumoto remains popular with tourists with its many ryokan (Japanese inns), day baths, and hotels.

Many of the locations in Hakone Yumoto offer both indoor and outdoor onsen experiences that any guest can enjoy.

Along the Hayakawa river flows the water of the Tonosawa Onsen. Quieter than Hakone Yumoto, many Japanese authors have taken refuge in its tranquility, writing about the onsen in their works. Discovered during the Edo period, the area has since been developed into a beautiful, picturesque hot spring resort. Plenty of day baths are also available here for an experience of traditional Japanese bath culture anytime.

Can’t make it out to Kanagawa? Let Sakuraco bring Kanagawa to you! Sakuraco ships traditional Japanese sweets, snacks, and teas from local makers from all over Japan right to your door for you to enjoy!

Between Tonosawa and Miyanoshita onsen is a relatively flat area called Ohiradai onsen. Once a prosperous woodworking village, it is a relatively new onsen, having been drawn and developed in 1951. Today, Ohiradai onsen retains its homey atmosphere, although beautiful flowers decorate the town in Spring. Ohiradai’s claim to historical fame, however, lies in the fact that important Japanese historical figure Toyotomi Hideyoshi once used the water here for a tea ceremony, dubbing the water “Hime-no-mizu” or “The Princess’ Water.”

The name Miyanoshita comes from the fact that this onsen was opened underneath the Kumano Shrine. Natural spring waters were discovered in this area during the Muromachi period. In the Edo period, wives of daimyo (feudal lords) and wealthy merchants visited the area often.

When the port of Yokohama was opened, foreigners were often found in Miyanoshita onsen due to the fact that foreigners were restricted from moving freely, but trips to Hakone were allowed. The famous Fujiya Hotel remains from that era with its beautiful Japanese-style architecture. During the Meiji period, the development of the town was heavily promoted, being number one in Hakone in terms of its architecture, facilities, hot springs, and customer service. Today, the town leans heavily on its historical pedigree.

In the Edo period, Dogashima onsen featured five hot spring inns. Today, only one remains. According to local folklore, this hot spring inn is said to have been opened by Muso Soseki, a Japanese Buddhist monk. The most famous monk of his time, he was named Kokushi, national Zen teacher, by Emperor Go-Daigo.

Located at the bottom of a deep valley, the onsen here are chloride baths.

The second oldest hot spring in Hakone, Kiga onsen is the stuff of legends. Yoshinari Kiga, a samurai that served the Kamakura Shogunate, was injured in battle. He was led to the onsen where his wounds miraculously healed and soon returned to battle. Selected as one of the original seven onsen of Hakone, the waters here supposedly promote fertility and were popular among the concubines of the Edo period.

Another one of the original seven Hakone onsen, Sokokura Onsen gained a reputation among Japanese people during the Meiji period when all the foreigners flocked to Miyanoshita. Sokokura Onsen is home to a legendary Taiko stone bath that was carved out by Toyotomi Hideyoshi when he attacked Odawara during the Warring States period.

Known for the Hakone Open Air Museum, Ninotairo is located between the Kowakudani and Gora onsen. It was originally a resting area for people that were working in those two areas. However in 1963, a natural hot spring was discovered. Steadily gaining popularity over the years, Ninotaira’s premier communal bath “Kame no Yu” (turtle’s bath) is known for its great effects on skin, leaving it soft and silky with no need for soap.

Once called Kojigoku (Little Hell), the name was changed to Kowakudani Onsen when Emperor Meiji made an Imperial visit to the area. Home to the now-closed Hotel Hakone Kawakien, the first large-scale hotel in Hakone, and the famous onsen theme park, Yunessun, the area is abundant with spas, ryokan, and other natural attractions. Many of the local ryokan offer private onsen here as well.

Once used as a villa for politicians, businessmen, and academics in the Meiji era, Gora Onsen is home to five different types of onsen, the most in the Hakone region. Today, people take time to enjoy a stopover in Gora for a traditional onsen experience before continuing on to their destination.

A relatively new discovery, Miyagino Onsen is a small village hot spring resort that has a climate like Sendai City. Tourists often come to see the remains of the Miyagino Castle and walk along the oldest Usui road in Hakone. In spring, the Hayakawa riverbank is adorned with over half a kilometer of Sakura (cherry blossom) trees.

An onsen resort in a wide grassland, the waters were originally drawn in from Owakudani in 1736. To this day, Sengokuhara uses water from Owakudani, Ubako, and Lake Ashi to supply the local hotels and ryokan. The area was developed as a Western-style summer resort from the Taisho era to the Showa era and has managed to preserve the nature around the area, creating the iconic image that tourists associate Sengokuhara with.

Ubako Onsen gets its waters from a rocky spring and is considered a holy place due to its location near Mt. Kamiyama, a mountain that was once worshipped. Legend has it that Kintaro, an ancient warrior, lay in the waters to heal his eyes. To this day, people travel to Ubako onsen to alleviate the symptoms of their eye diseases.

Ashinoyu Onsen is said to be the only place in Hakone where one is able to find an alkaline-sulfate onsen bath. The highest of the original seven onsen, many travelers sought this rare hot spring in an effort to cure themselves of their diseases. The onsen here have also been featured in many literary works. Ashinoyu Onsen holds tight to its historical bonds, and many historical sites can be seen throughout the area.

The newest of Hakone’s onsen, Takogawa Onsen was called Motohakone Onsen before being classified as a separate onsen. Takogawa Onsen features an aquarium and a gorgeous view of Lake Ashi and Mt. Fuji at the Hakone-en Resort Complex.

Ashinoko Onsen is the second newest onsen in Hakone. Known as an inn town throughout the old Tokaido road, the area allows you to discover Mt. Fuji and Lake Ashi as the main attractions here. Tourists gather at Ashinoko throughout the years to partake in their festivals, earning Ashinoko Onsen a reputation as an all-season resort.

Have you ever been to Hakone? Did you know about these seventeen onsen? Which one would you like to go to?