What is a Mikoshi? The Challenge and Honor of Carrying a God 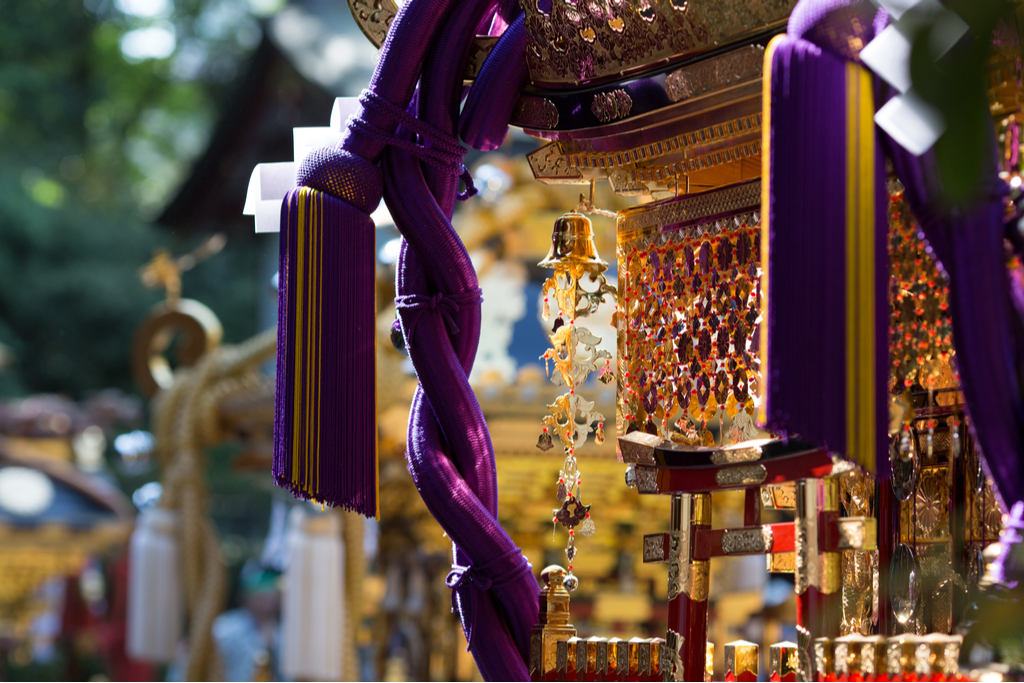 Every year, men and women volunteer at Japanese festivals for a tiring but also exhilarating responsibility: carrying the mikoshi. Most likely a familiar sight for anyone who has attended a festival in Japan, or even just seen a photo, this beautiful and intricate religious object is believed to contain the spirit of the shrine.

Shintoism is the indigenous religion of Japan and many traditions are tied to its belief system. One of the core beliefs is that there are 8 million gods (a number in ancient Japan that was synonymous with infinity), which explains why there seems to be a god for everything and every town. While Shinto shrines can be seen all over the country, there is usually a main shrine in each town or city where it is believed the deity lives. And it is in this shrine that the mikoshi is kept for most of the year.

What is a Mikoshi?

In simple terms, a mikoshi is a portable mini shrine that houses a god. At festivals, it is carried around a town by parishioners to bless businesses and residents, but also to ward off misfortune. In Shintoism, it is believed that the local deity dwells in the shrine and it can only be moved by being carried within a similar structure. Because of this, it’s common for the mikoshi to be a miniature version of the shrine.

They are made of wood with two or more poles or beams, depending on the weight. The shape is square, hexagonal, or octagonal and they are often elaborately painted and embellished.

What Does Mikoshi Mean?

The kanji for the word “mikoshi” is actually quite literal and easy to understand. The first symbol, “mi” (神) means “god” or “spirit”, and the second, “koshi” (輿), means palanquin or portable. This type of transportation was commonly used by nobility in the past, and therefore was seen as elevated and appropriate for transporting deities as well.

Carrying the mikoshi is a time-honored tradition, and there are strict rules to follow, including what to wear. Civilian or modern clothes are not permitted and each team or clan has their own uniform.

Participants are expected to pay for their own ensembles and a full set can easily cost upwards of 100 US dollars. The full outfit generally includes:

Taking part in this religious and cultural event is considered a privilege but is also immensely tiring. Depending on the mikoshi, there can be restrictions based on age or gender. Some festivals even have special children’s mikoshi to help the younger residents feel part of the celebration.

To add to the already arduous task of carrying an extremely heavy structure over a long distance, sake is also an integral part of the ritual. It is not unusual for mikoshi carriers to drink shots of rice wine, as early as 6 or 8am, before starting their route. Due to alcohol consumption, as well as the heat of summer, the participants will have a rotation to ensure nobody gets too exhausted.

How the mini shrine is carried is also important. There are actually several styles and shouts, but in Tokyo, the famous Edomae (Edo Style) used at the Asakusa Sanja Festival is to quickly sway the shrine right to left while crying out “say ya, soi ya, sah, sorya…”. The swaying is believed to amuse the god on their journey around town, but also to entertain the spectators.

Blessings Along the Way

As the shrine is carried along a set route, there are certain planned stops, such as the police station. Japanese society highly values safety, so blessing the police is believed to be a way to keep the citizens safe. Other important stops include the city office, as well as a lunch break.

One of the most famous festivals in Tokyo, the Sanno Matsuri, has the immense privilege of entering the Imperial Palace grounds to bless the Japanese Royal Family.

Once the festival celebrations have ended, the deity is returned to the shrine and the priest holds a ceremony to welcome them back. And there they will remain until the next celebration.

Would you carry a mikoshi if given the chance? Let us know in the comments below.