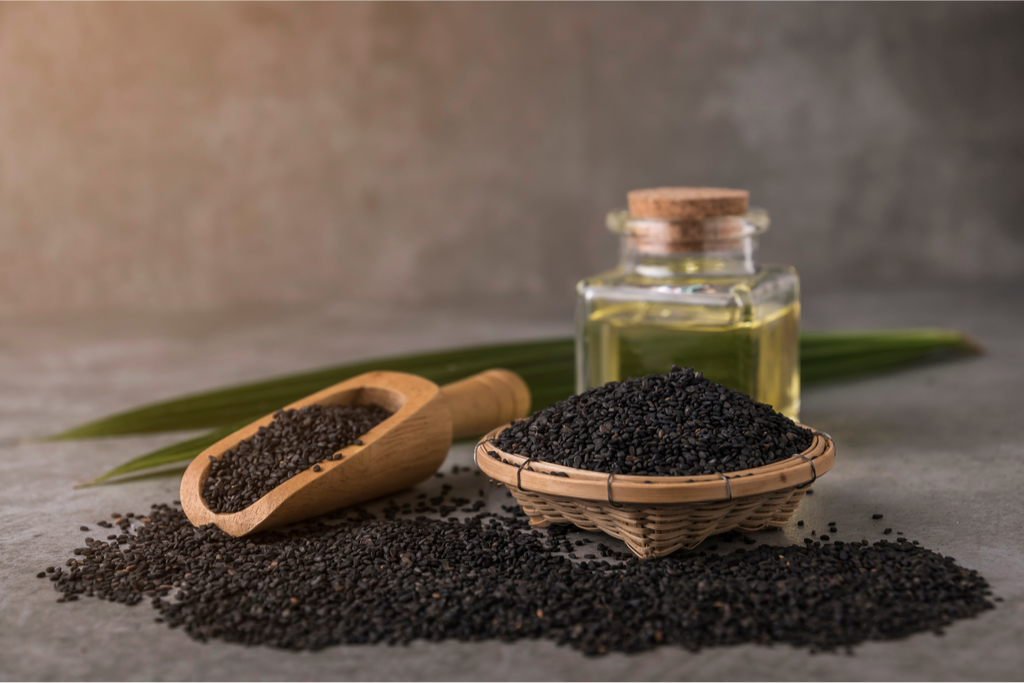 Black sesame seeds (kurogoma) are a delicious staple of Japanese cuisine that is also very popular.  They are an underrated superfood, found in both convenience store comforts and high-end restaurants. Black sesame is sure to enhance your dining experience whether you’re visiting Japan or at your local Japanese restaurant.  Read on for more information about this modern twist on traditional Japanese food!

Sesame seeds were originally produced in India around 3000 BC.  However, as of today, Japan is the world’s largest importer of this oilseed crop.  With its countless uses in many kinds of dishes, it’s no surprise that Japan has the largest supply of it in the world.

You can usually find white (hulled) sesame seeds on hamburger buns and in candy. However, black (unhulled) sesame seeds are a whole different experience altogether, especially in Japan.  They are most commonly sprinkled on top of onigiri (rice balls). However, they can also be used with soba noodles (noodles made of buckwheat flour) and in udon noodles (thick wheat flour) noodles as well.

In addition, they are also a superfood, packed with copper and Vitamin B6. They are also a great source of protein and healthy fats. Some health benefits of eating black sesame seeds include boosting hair growth, lowering blood pressure, and improving bone health.

But to get these benefits, you would have to eat a handful of black sesame seeds per day! Luckily, Japanese people have found some creative ways to use this delicious superfood.

When eating food in Japan, you’re more likely to enjoy black sesame paste (kuro neri goma) rather than its seed form. It’s used as a base for sweet treats like ice cream, cookies, and milkshakes, even becoming the Japan-exclusive Shake Shack milkshake flavor. Savory dishes like miso soup, meat and vegetables, and raw fish include black sesame paste as well.  As mentioned earlier, most people describe black sesame’s flavor profile as rich and nutty, with a slightly bitter aftertaste.

With such a versatile flavor, it’s easy to see how black sesame is used so seamlessly in Japanese cuisine.  Now let’s take a quick look at some restaurants in Japan that have black sesame on the menu!

Gomaya Kuki is another artisan ice cream shop in Shibuya, but whereas black sesame is a feature at other shops, it’s the flagship flavor here. Take a quick stop here after enjoying Harajuku’s fashion to sample the “world’s richest black sesame ice cream”, complete with sesame seeds and sesame oil.

Located in the lively, international neighborhood of Roppongi, Soryuto specializes in dandan-men, a Japanese version of a spicy Chinese noodle soup.  But to make things even better, they also have black sesame dandan-men on the menu, for those who want to experience an earthy dish with a little kick to it.

For those who can’t make it to Japan just yet, here are some black sesame recipes you can try on your own.

This soup recipe uses miso paste, another common Japanese ingredient.  It’s also vegan-friendly and uses a lot of tofu.  It’s perfect for those who want to give black sesame a try, but also wish to eat more on the healthy side.

Chahan, also known as Japanese fried rice, is already a staple comfort food.  So why not season it with some grounded seeds, green onions, and soy sauce? You can also add some egg and bacon to really boost this dish’s protein content.

For those who want to add matcha, one of Japan’s most versatile ingredients to the mix, this fusion dessert recipe is sure to satisfy your sweet tooth. These cookies are delectable, and seamlessly combine the nutty notes of black sesame with the grassy undertones of matcha.

Have you tried any of the black sesame foods above? Which one is your favorite? Let us know in the comments below!