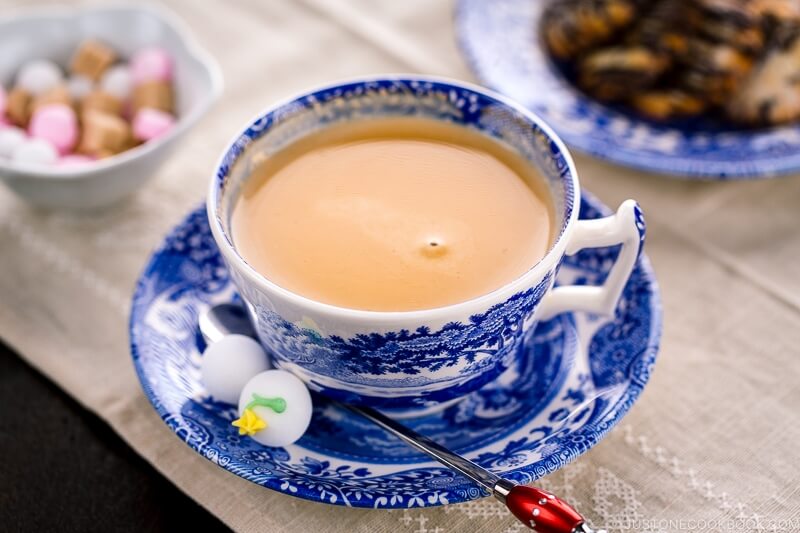 What comes to your mind when you hear the words, “milk tea”?

Do you imagine a hot cup of tea with a nice light brown or pale orange color that has those small, frothy bubbles, and is sometimes served with a side of milk and sugar? Or do you imagine the boba tea that’s being sold in those colorful tea shops, the cold, creamy drinks sweetened by toppings like tapioca pearls? Or maybe you’re thinking of those neatly bottled drinks that you might find being sold in vending machines?

Whichever image of milk tea it was that you thought of, Japan is the country that has them all. In this article, we’ll talk all about the varieties of milk tea flavors that either originated from or can only be found in Japan. We’ll also prove that milk tea isn’t just tea with milk; there are so many rich varieties to choose from that you’re sure to find your very own favorite kind of Japanese milk tea.

If you ever get to visit a Japanese tea shop or cafe, or even a regular grocery store, you’ll notice that one of the popular options is Japanese royal milk tea. Royal milk tea is uniquely Japanese — it was introduced to the country by Lipton Japan for their “royal recipe” series, and their milk tea recipe became incredibly popular.

Although it has its origins in Japan, this drink does not use Japanese teas. Instead, it uses assam tea, which is a kind of black tea that is indigenous to the Assam region of India. If assam tea isn’t available, they can also be made using other types of black tea leaves, such as the English breakfast tea blend.

The most distinctive part of this tea’s flavor is its creaminess because it typically uses a lot more milk than other kinds of milk tea. The use of assam tea in the recipe also helps give it a full-bodied flavor that dips into the sweeter side.

In Japan, if you walk into any kind of store where they sell drinks, it will be easy to find a bottle packaged as royal milk tea. In grocery stores, you might also find them being sold in powder form, which is essentially powdered tea mixed with milk powder that you can add hot water to for a quick and easy drink. These inexpensive versions of the drink tend to have a much sweeter and stronger flavor than the version of Japanese royal milk tea being sold in cafes.

Bubble tea is a type of milk tea that has reached an impressive level of popularity. The form of it that you might be familiar with today actually originated from one of Japan’s close neighboring countries, Taiwan. It was first sold in the 1980s, and over the past few decades, it has seen such a steady increase in popularity that it spread to nearby countries like Japan and Korea, and has also reached countries outside of Asia.

In a typical Japanese bubble tea shop, the type of tea that is normally used is oolong tea. You might find it in the menu written in Japanese tea as ウーロン・ミルクティー, which simply translates to “oolong milk tea”.

As for toppings, the most popular, of course, is the classic tapioca pearls. Some tea stores give you other options to choose from, which includes milk foam, nata de coco (a type of chewy, translucent jelly made from coconuts), and aloe vera jelly.

There are also some tea stores in Japan that specialize in milk tea made using Japanese teas, like hojicha (roasted green tea) and sencha (tea made using whole tea leaves infused in hot water). These stores help sell the appeal of Japanese teas as a good alternative to the usual black teas being used.

Another example of a delicious Japanese milk tea drink is the Hokkaido milk tea. Hokkaido is Japan’s northernmost prefecture, and because of its climate and its location, this region is known for producing the highest quality milk that is available in Japan.

The ingredients used for this type of milk tea are actually quite simple, and the thing that makes it special is the way they come together to make a rich and delicious drink. For the tea, you can use any kind of black tea, preferably ones that come as loose leaves, but tea bags can also be a decent option.

You will also need a type of sweetener to give the drink a nice boost of sweetness. For authentic Hokkaido milk tea found in Japanese tea shops, they typically use brown sugar or caramel syrup as a sweetener. Since this drink is served cold, when they’re adding brown sugar, they use a melted or a syrup form of it, and the sugar is then shaken or blended with the rest of the ingredients. Toppings like tapioca pearls are also often included.

The true star of this drink, however, is Hokkaido milk, and it won’t be true Hokkaido milk tea without it. Hokkaido milk has an incredibly smooth and creamy taste, and a lot of people in Japan also tend to enjoy it as a drink on its own. When added to tea, this milk adds a new level of richness and creaminess that makes it very easy to enjoy.