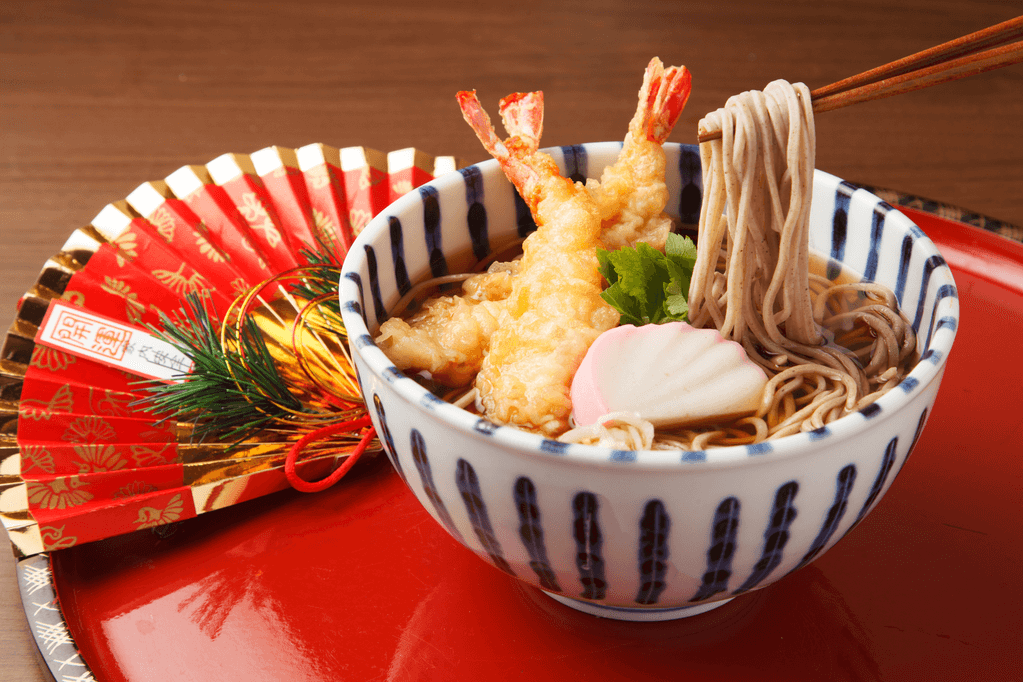 Toshikoshi soba, in addition to osechi and kagami mochi, is a traditional delicacy for the Japanese New Year. It’s a twist on soba (buckwheat noodles) and has fantastic variations across Japan. Let’s take a closer look at this legendary dish and its impact on Japanese cuisine.

Some claim that the pronunciation of “soba” is a homophone for “side,” which is also soba in Japanese. Therefore on New Year’s Eve, families eat soba to “remain by each others’ side for the next year.” Togetherness between families is essential to end-of-year celebrations in Japan.

The dish consists of buckwheat soba noodles, in a hot dashi broth, with coarsely sliced green onions as a garnish. However, if you want to make it unique, tempura, kamaboko fish cakes, or a raw egg are also good toppings. It captures the essence of starting fresh for the new year with its simplicity.

The term “negu,” which means to calm the mind, is claimed to be the reason for using green onions (negi). It could also be a play on the word “negi,” a job title for the assistant to the chief priest in a Shinto shrine.

Looking to try out some new things for the New Year! Try Sakuraco! Check out Sakuraco! Sakuraco delivers traditional Japanese snacks, teas, sweets, and snacks from Japan to your door every month so you can enjoy Japanese delicacies at any time!

The noodle, the myth, the legend

This tradition originates from the Edo period (1603-1867); according to legend, soba noodles represent breaking away from the previous year’s troubles. The texture and consistency of the noodles make them easier to chew and break apart than other noodles. Most Japanese people eat toshikoshi soba, and vendors sell it in small plastic containers on New Year’s Eve.

By 1814, toshikoshi soba had become a tradition in Osaka. Merchant families, mainly, had a habit of eating misoka soba on the month’s final day. This tradition has evolved into the toshikoshi soba only offered on New Year’s Eve. Soba became more popular during the Beriberi epidemic in Edo because people ate it as a remedy for the deficiency.

According to certain customs, eating it the day after the New Year is unlucky. On top of that, the New Year will be unfortunate and impoverished if you have leftovers. Other traditions state that eating soba is good for longevity since the food is long and thin.

Another theory is that gold and silversmiths used buckwheat flour to collect scattered gold and silver dust in their workshops. Others state that the people ate soba to cut off their hardships for a fresh start. Generally, all of the toshikoshi soba’s origin theories revolve around the same three themes: longevity, wealth, and luck.

Where people live affects when and how they eat soba for New Year’s Eve. Toshitori zakana, a fish meal over white rice, is the traditional custom. This practice dates back to when fish were considered lucky in ceremonies and festivals. Regarding the fish of choice, people usually eat salmon in the east and yellowtail in the west.

In the prefecture famed for its udon, Kagawa has developed the tradition of eating toshikoshi udon instead. However, while Kagawa’s udon fame is famous throughout Japan, most families in Kagawa still prefer soba over udon on New Year’s Eve.

In Okinawa–since its reunification with mainland Japan after the US occupation–people have also begun the tradition of eating toshikoshi soba. However, unlike mainland buckwheat soba, The noodles’ texture is chewy and more elastic than traditional soba noodles.

Some other regions in Japan may stray away from the dish’s simplicity and instead eat nishin soba, which is soba in hot broth with salted herring on top. Nishin is Japanese for “herring,” and it’s also a Japanese homophone for “both parents.” Since herring fish lay a lot of eggs, it symbolizes prosperity.

Have you ever eaten toshikoshi soba? What are your new year’s resolutions? Let us know in the comments below!