Shoyu Ramen: Four Things You Should Know About This Dish 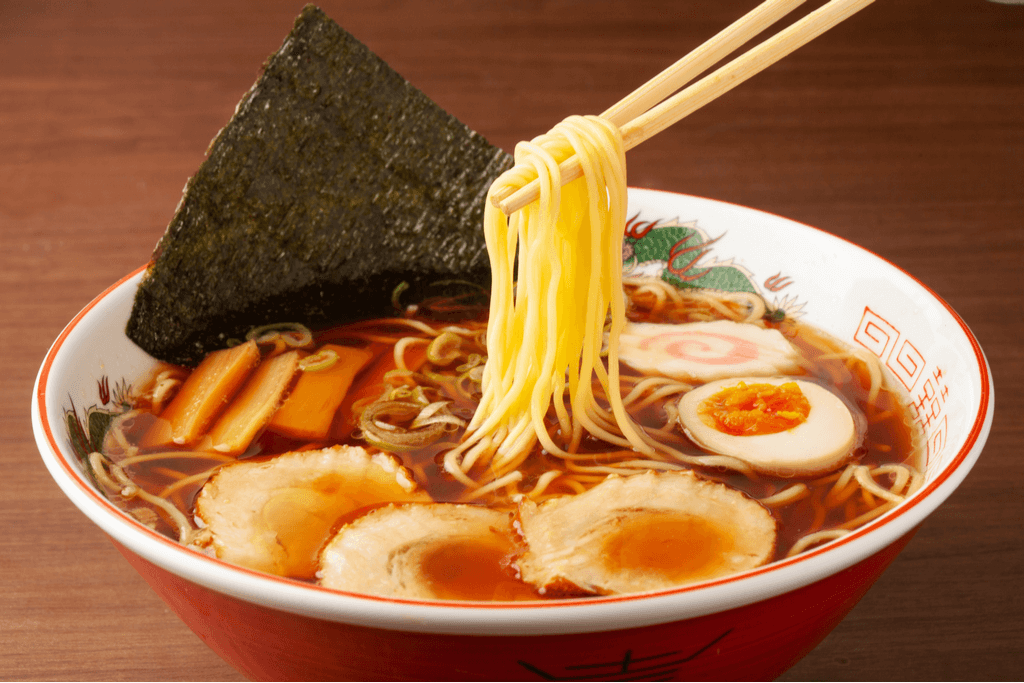 As one of the four main types of ramen, shoyu ramen (Chinese-style noodles in a soy sauce broth) has captured the hearts and stomachs of many a ramen lover. Let us show you (hah, get it?) the appeal of shoyu ramen.

What is Shoyu Ramen?

Shoyu ramen is a style of ramen using a soy sauce-flavored tare or base. This noodle dish can usually be recognized by its clear brown soup, although there are some cloudier varieties. The clarity of the soup will usually affect the taste – the clearer the broth, the more refreshing it’ll taste.

Like most ramen dishes, shoyu ramen is a combination of five unique components that are brought together under the masterful work of a ramen chef to create a distinctive style. These ingredients are the noodles, the stock, the tare, toppings, and fat or oil.

Shoyu ramen usually uses wavy noodles that are thicker than the straight noodles used for tonkotsu ramen (pork bone broth ramen). The stock is commonly made from chicken meat and vegetables like carrots, garlic, scallions, ginger, and onions. However, some restaurants incorporate traditional Japanese ingredients like kombu (kelp seaweed) and dried fish to help increase the flavor of the stock.

Recently, some restaurants have used beef and pork-based stocks as well. However, the main ingredient of Shoyu ramen is the soy sauce tare. While shoyu (soy sauce) might seem like a common household ingredient, chefs will usually have their own secret recipe which elevates the taste of the soy sauce to a higher level using a mix of spices and other ingredients.

This is the sauce that makes shoyu ramen what it is. It can be considered the flavor bomb of the whole dish and without this secret combination of umami (savoriness), shoyu ramen would lack the subtle flavor needed to refine its stock. When mixed with the stock, tare forms the soup.

The fourth ingredient is the oil. This is the last bit of flavoring needed to perfect the dish and fully bring all the elements together. Finally, the noodles are topped with an array of favorites like chashu (roasted pork belly), bamboo shoots, spinach, bean sprouts, and green onions.

Want to experience all of the flavors of Japan in your own home? Check out Sakuraco! Sakuraco sends traditional Japanese snacks, sweets, teas, and even kitchen or tableware, straight from Japan’s local makers right your door!

Shoyu Ramen is Number One!

Number one in the hearts of Tokyoites, in case you were wondering. In 1910, the first ramen shop called Rairaiken opened in the Asakusa district of Tokyo, serving the first shoyu ramen. Previously, shio ramen (ramen with a salt base) was served in Chinese restaurants in Japan. This new type marked the official change from its Chinese predecessor into something wholly Japanese.

Today, shoyu ramen remains especially popular in Tokyo. The Tokyo style consists of a clear brown soup made from soy sauce tare and a chicken stock infused with seafood elements. The noodles are wavy and have a medium thickness, although some restaurants might adjust the size of the noodles to match their soup.

The ramen is usually topped with chashu, green onions, soft-boiled eggs, seaweed, bamboo shoots, and occasionally, naruto, a fish cake with a spiral design in the center. While tastes may have changed, there are many ramen shops in Tokyo that work hard to preserve the delicate flavor of Rairaiken’s original recipe. However, many neighborhoods in Tokyo now have their own distinguishing features.

Shoyu Ramen is the Prototype

Aside from Tokyo-style ramen, many other regions have created their own special types based on shoyu ramen. The versatile soy sauce flavor, along with its universal affection, has made this noodle dish one of the most commonly found noodle dishes in all of Japan. From Hokkaido’s Asahikawa ramen to Yokohama ramen, even Kansai’s Kyoto and Kobe ramen or Kyushu’s Miyazaki ramen, all of these unique regional ramen varieties feature shoyu ramen as their foundation.

This Dish Has Been to Space!

In 2002, the famous Japanese cup ramen and instant ramen maker, Nissin Foods, worked with the National Space Development Agency (NASDA) to create an instant ramen that could be consumed in space. The noodles that they developed were none other than shoyu ramen!

However, one of the biggest components of ramen is the soup and in space, soup floats and can potentially cause problems if it gets into any of the machinery aboard the International Space Station. One of the biggest hurdles that scientists had to overcome was how to make the ramen taste just like how it would on Earth while making sure that it was packaged in a specially sealed container.

On July 26, 2005, Space Ram, the ramen for astronauts, would make its debut in space as a Japanese astronaut, Soichi Noguchi became the first astronaut to eat instant ramen in space. Soichi Noguchi would later turn to space in 2009 where he once again brought along Space Ram to the International Space Station.

Have you ever tried shoyu ramen? Where is the best restaurant to eat shoyu ramen? Tell us in the comments below!