Nikko, Japan: A Wonderful Traditional Haven in the North 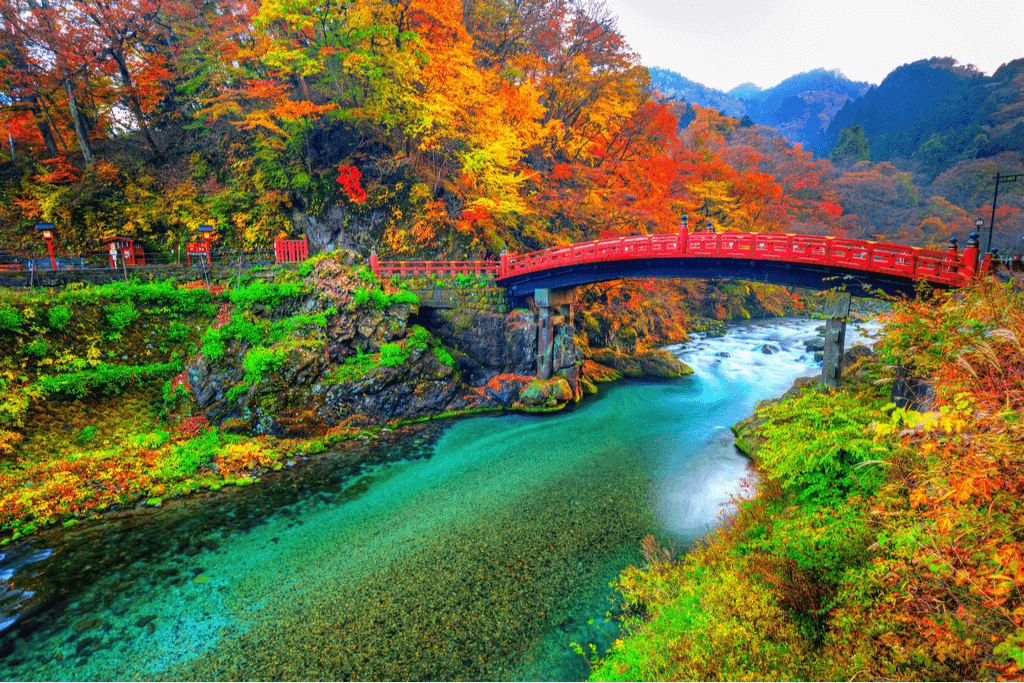 If you are looking for a getaway land to enjoy all the best typical attractions of Japan, Nikko’s ancient cultural sites, natural landscapes, and hot springs, are perfect for you! Check this out to see what this city offers, especially on a day trip from Tokyo!

Nikko is in Tochigi Prefecture (in the northern part of Kanto), a two-hour drive from Tokyo. It is one of Japan’s most popular tourist destinations, with beautiful natural scenery and long-standing historical and sacred sites. The ideal time to visit Nikko is in spring and autumn, especially in autumn, due to its changing landscape during the momiji season.

Speaking of Nikko, we must remember to mention its World Heritage Sites. There are three in total: Toshogu Shrine, Futarasan Shrine, and Rinnoji Temple.

The most impressive and visited site is Toshogu Shrine. It honors Tokugawa Ieyasu, the founder of the Tokugawa Shogunate ruled Japan from 1603 to 1867. Here you can witness the most beautiful gate in Japan, also known as National Heritage – Yomeimon Gate. From the corridor to the two sides of the gate, the pillars and buildings have more than 500 sculptures called “Higurashimon,” meaning they are not boring to see all day long.

Moreover, you can spend hours admiring the intricate animal carvings that were said to be built by the best carpenters in Japan. One of the most famous ancient sculptures you cannot miss is the “Three Wise Monkeys,” which represents the maxim “hear no evil, speak no evil, see no evil.”

Futarasan is the second largest shrine in Nikko, Japan, after Toshogu shrine, but it’s much older. To that end, it’s a place of worship for three of Nikko’s most sacred mountains: Mount Nantai, Nyoho, and Taro. In addition, they also honor three Shinto Gods: Okuninushi, Tagorihime, and Ajusukitakahikone. Two swords, Japan’s national treasure, are displayed in its main hall.

To reach this shrine, visitors will cross the beautiful red Shinkyo Bridge. Shinkyo Bridge is an accompanying structure and is considered an important cultural property of Japan.

Legend has it that when the monk first attempted to ascend the sacred Mount Nantai, the Daiya River blocked his way. As he prayed to cross the river safely, the River God summoned giant snakes to form a bridge, resulting in the bridge’s second name, “Yamasugeno-jabashi,” meaning “snake bridge of sedge.”

Opposite Sanbutsudo stands the temple’s treasure house with Buddhist and Tokugawa-related exhibits. There is also a tiny Japanese-style garden located behind the treasure house. As a result, it’s a perfect example of an area where elements of Buddhism and Shinto were closely intertwined.

This marshland is famous for its diverse wildlife ecosystem with 350 species of plants and birds. It offers the best hiking trail in the Nikko National Park and is recommended to visit during autumn when all the grass turns reddish yellow. There are many minor observation points throughout the journey to explore the vast plateau, up to 400 hectares wide, for you to admire and have more relaxing outdoor experiences in Nikko, Japan.

Lake Chuzenji is at an altitude of 1,269 m (4,163 ft) above sea level, with water flowing directly from Kagen Falls. The contrast between the lake and Mount Nantai in the north creates such a magnificent view that it’s one of Japan’s 100 most beautiful scenes.

The beauty of azaleas and momiji trees in early summer makes this place more popular. You can admire the lake view on boats going down the water or relax along the lakeside is also an equally attractive option in Nikko, Japan.

Kegon Falls is one of Japan’s most prominent and famous waterfalls in Nikko. The majestic waterfall flowing from 97m (318 ft) is breathtaking. You can use the elevator to reach the observatory area and admire the panoramic view and the close-up of the 4.5m (15ft) deep waterfall basin. Feeling the sound of a steep waterfall will be a new experience to help you regain physical and mental energy.

Ryuzu Falls are probably the second most accessible of Nikko’s waterfalls after Kegon Falls. This waterfall has its name from a large rock near the foot of the waterfall that divides the water in half, forming the shape of a dragon’s head. The scenery around the waterfall is famous for its thousands of red leaves in autumn and its beautiful red azaleas in May. You can see the waterfall better if you try to climb the steps along the riverbank.

Go sightseeing according to the order of Lake Chuzenji, Kegon Falls, Ryuzu Falls, and Senjougahara. You can have a whole fun day taking pictures and enjoying these natural beauties in a day.

Other recommended spots in Nikko, Japan

If you go along the Daiya River, you will come to a small gorge called Kanmangafuchi Abyss. You will also get a beautiful view of the botanical garden on one side of the river.

Besides the beautiful scenery, you can also find on the south bank 70 statues of the Buddha Jizo, also known as Bakejizo (jizo ghosts). The name is because there is a story that every time you count, the number of statues changes. Explore the area for yourself!

Kinugawa Onsen is one of the large-scale hot springs in the Kanto region, located at the upper reaches of the Kinugawa River. Monks and feudal lords discovered this hot spring in the Edo period. Kinugawa Onsen has low-alkaline spring water that softens the skin, dispels fatigue, and improves health.

The park’s staff are all dressed in traditional Edo period costumes and perform acts for visitors. In addition, this park also has many fun activities for families, such as experiencing self-dressing Edo-ite or living the life of a ninja.

These are just some of Nikko’s must-visit spots; many more destinations in Nikko are worth a visit too! Do you know any other best places in Nikko, Japan? Tell us in the comment below!