How is Mochi Made? An Iconic Traditional Japanese Snack 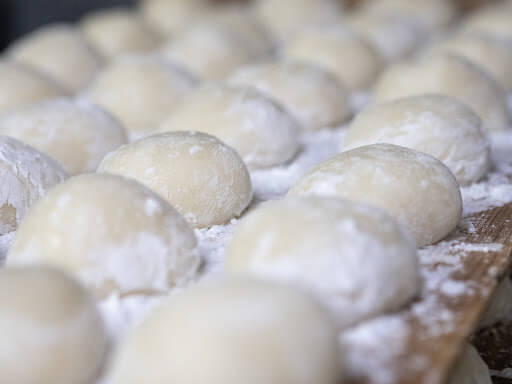 For many Japanese, mochi making is a time-honored tradition.

If you’re a Japanophile like us, chances are you’ve already heard of mochi, Japan’s traditional sticky rice cake. But do you know how mochi is made?

As a variety of Japanese cakes made from sticky rice dough, mochi comes in many different shapes and flavors. Some popular options include mochi balls filled with sweet red bean paste, sprinkled with soybean flour, or even grilled and wrapped in seaweed.

Whatever the recipe, at the heart of each Japanese rice cake is mochi dough: a sticky, elastic paste made by cooking and pounding a type of rice called mochigame.

Mochigame is a short grain, sweet and rice known for its chewy consistency. and pounding it down into mochi was once a ritual event with strong religious significance. Nowadays, while traditional mochi making continues, particularly in rural areas, modern preparations have also become popular to save on time, effort, and equipment.

Making Japanese mochi the traditional way is called mochitsuki, literally “mochi making.” Like so many things in Japan, mochitsuki is not only a practical task but a beloved craft and a ritual ceremony. It’s also a laborious, day-long event that relies on perseverance and collaboration. As such, mochitsuki is often carried out in a group of family or friends during a period of celebration and rest. Within Japan, the most common time is Japanese New Year’s, when mochi features as a central component of traditional Japanese New Year’s food, osechi ryouri.

Ready to experience mochi for yourself? Sakuraco is bringing you 20+ traditional Japanese snacks crafted by local makers.

In traditional mochitsuki, the process of mochi making begins the evening before, when the mochi rice is washed and soaked overnight. The next morning, the rice is placed into a wooden basket and steamed atop a pot of boiling water. Once soft, the steamed rice is transferred to a large Japanese mortar and kneaded until it forms a hot dough. Then it’s time to begin the pounding!

Pounding mochi is by far the most exciting part of mochitsuki. At least two people must take part: one as the tsuki-te, who pounds the sticky rice dough with a large wooden mallet, and other as the kaeshi-te, who turns the dough and adds hot water to stop it from sticking. This step is an integral part of what makes mochi mochi: pounding introduces air into the dough, giving mochi its characteristic soft and chewy texture. Since mochi hardens as it cools, speed is essential.

Well executed, traditional mochitsuki can be as elaborate and impressive as a choreographed dance. The dough is piping hot and the wooden mallet hard and heavy, and so the kaeshi-te and tsuki-te often shout as they work to help establish a rhythm and avoid injuries. Needless to say, it’s hot, dangerous work that will test your trust, speed, and coordination to the limit!

Once the dough is smooth enough that no more rice grains can be seen, it’s transferred to a floured surface for shaping. Most often, the dough is rolled into small, round mochi balls, but other common shapes include cubes, rectangles and triangles. This is also when the mochi dough is combined with various other ingredients such as red bean paste, cinnamon, and ice cream to make the delicious treats we know and love.

Over the years, a number of modern methods of making mochi have been developed to be easier and less labour intensive. In an industrial context, pounding the mochi rice has largely been automated by a special pounding machine. Some of these machines, similar to bread makers, use a blade for kneading and punching the dough. Others recreate the full mortar and mallett set-up of traditional mochitsuki and simply mechanise the process of pounding, turning, and adding water.

By comparison, the most common method for making mochi at home today is radically different from its traditional counterpart. Instead of using glutinous white rice as a base, it uses a glutinous rice flour, such as mochiko or shiratamako. These flours are produced by grinding mochigome rice into a powder, allowing cooks to skip the pounding step entirely. In this method, the rice flour is combined with water and then cooked and stirred repeatedly until it forms a sticky, malleable mochi dough.

However, although quicker and easier than traditional methods, connoisseurs will tell you that mochi made using flour instead of rice lacks the smooth, stretchy texture of traditional mochi. For cooks who are particular about their mochi, dedicated appliances can be purchased to avoid this pitfall. Similar to rice cookers, these appliances first cook the rice and then automatically pound it into a smooth paste using a powerful motor and fitted blade.

Of course, despite all these options, it’s not uncommon for Japanese people to buy their mochi pre-made from the grocery store! While packaged rice cakes might sound less appealing than the soft, chewy, hand-shaped mochi sold at festival stalls or made at home, they’re much more convenient and can be stored and kept much more easily—ensuring that there’s always mochi on hand when you need it. What’s more, grocery stores are a great place to find some of mochi’s most delicious varieties, like the much-loved mochi ice cream!

Interested in making Japanese mochi the traditional way? Which would you rather be—the kaeshi-te, or the tsuki-te?

Thanks to everyone who joined our giveaway! Hi Sakuraco family! Hope you are well and

Children’s Day (Kodomo no Hi) is a national holiday in Japan, celebrated annually on May 5th every year, also making it the last holiday of Golden Week. As the name suggests, it’s a day to celebrate and pray for the growth of children.

The Japanese kappa (known as 河童) is one of Japan’s best-known folklore characters. A type of Japanese yokai, this water deity is a scaly, aquatic creature that can be found in bodies of water.