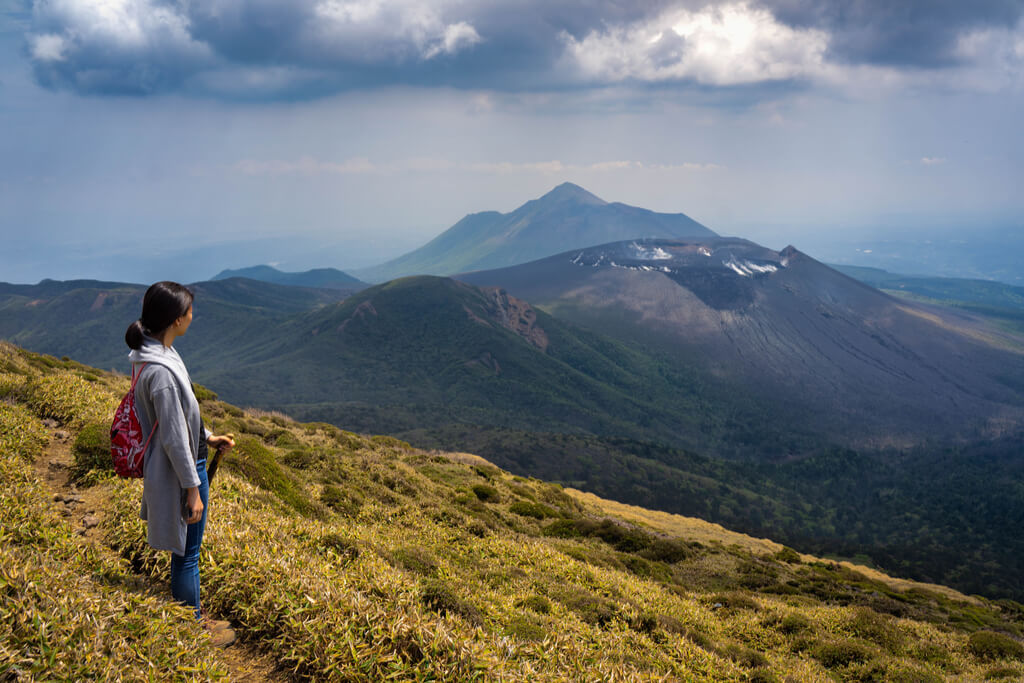 The island of Kyushu, the southernmost part of Japan, is actually closer to Korea than to Tokyo. This makes for a complete change in scenery from Japan’s most famous city, especially in nature and on hiking trails. Let’s have a look at the best hiking trails in Kyushu!

The island of Kyushu is one of the five main islands of Japan and is made up of seven prefectures, including several smaller outlying islands. It is famed for its beautiful scenery of national parks with dramatic volcanic ranges, rocky outcrops, rainforests, and ancient cedar trees. The Kyushu Mountain Ranges are well-known among climbers around the world and consist of the Kuju Range and the Taisen Range.

The people of Kyushu are some of the friendliest and most welcoming in Japan. Because of their close proximity to the mainland, Kyushu has a history as a point of contact between Japan and the rest of Asia. Kyushu is also home to the famous Imari ware and Akita ware, so if you’re into pottery, a good idea is to hike a mountain, head to a hot spring, then pick up some pottery from one of the famous towns before heading back.

If you want to experience Japanese bath culture, the hot springs of Beppu are the second largest concentration of hot springs in the world, making it the perfect destination to head to and relax those muscles post-climb.

That being said, hot springs and ceramics stores are just for after the hike. The main event should be the hike itself, right? So in this article, we’ll detail three areas with the best hiking trails in around the volcanic region.

Want to experience the magic of Kyushu over tea? Sakuraco sends local Japanese snacks from regions like Kyushu, Tokyo, and Kyoto, right to your door.

Kumamoto is famous around Japan for Mount Aso, an active volcano which last erupted in 2019. Mt. Aso is a fantastic and rare chance to see an active volcano from the top. The Aso Volcano Disaster Prevention Council carefully monitors the level of volcanic activity, so when it is open, it can be considered safe.

It is located in the Aso-Kuju National Park (established in 1934, making it one of the oldest national parks in Japan), and at 350 square kilometers, Mt. Aso is one of the largest calderas in the world.

Contrary to its name, Mt. Aso is not just one mountain, but refers to the Kuju mountain peaks of the volcano.

The five most famous mountains include the highest peak, Mt. Nakadake (中岳), and second highest, Mt. Nekodake. Mt. Nekodake, or ‘Cat Peak’, got its name because its two highest points look like cat ears.

Mt. Nekodake is a great mid-level hike for both beginners and more seasoned hikers alike. The peak is 1,433m high and takes around two hours to climb. When climbing, hikers will pass changing scenery from forests and woodland to rocky paths.

Mt. Nakadake is possibly the most impressive out of all the mountains in Aso. When hikers reach the top of this 1,506m mountain, they are treated to a breathtaking view of an active volcanic crater where they can stare into the depths of sulphuric gases and pools of bubbling liquids. Occasionally, Mt. Nakadake is closed due to possible volcanic activity, so if this happens, head to the nearby Kusasenri, which offers hikers another viewpoint of the infamous crater.

For those who are more interested in moderate strolling as opposed to a mountain climb, head over to one of the visitor centers, such as Chojabaru Visitor Center, which provides a starting point for many trails around the national park. Either way, Mt. Aso has many of the best hiking trails in Kyushu for people to enjoy.

In Kirishima National Park in Kagoshima prefecture, you’ll find a wealth of energizing volcanoes and mountainous hikes, with something for everyone from beginners to more intermediate climbers. A good route for anyone is the Kirishima Ridge Trail, which takes hikers from Ebino Kogen (a small town just outside of Miyazaki Prefecture) 12km through to Mt. Shinmoedake.

Hikers begin at the Ebino Kogen visitor center and make their way up to the peak of Mt. Karakuni-dake. Karakuni-dake is the tallest summit of Kirishima, standing at 1,700m high.

Climbers will pass space-like, red craters and rocky terrain, and after Mt. Karakuni-dake, will be able to see a new lava-dome at the next peak of Mt. Shinmoedake.

The descent to Takachiho-gawara Visitor Center, the final destination for the Kirishima Ridge Trail, is marked by a giant spear called Amanosakahoko, an important part of Japanese mythology. It is said that Ninigi, the grandson of the sun goddess Amaterasu, landed here when he descended to earth in order to rule Japan, using this spear to find his way. In fact, the current Imperial family claims to be descendants of Ninigi.

A great point about the Kirishima Ridge Trail is that it can be reached easily by public transportation.

In addition to Kirishima, Kagoshima is home to the island of Yakushima, which definitely deserves a mention.

Yakushima is a must for Ghibli fans. Parts of Yakushima inspired the film Princess Mononoke with its fairytale-esque scenery and beautiful moss-covered woodland. Yakushima is so unique that around 20% of the island is designated as a UNESCO World Heritage Site.

Yakushima is covered with ancient cedar trees, including some which are said to be between 2000-7000 years old.

Yakushima is the perfect island for hiking around and has trails of varying intensity. These range from easy 30-minute walks such as the Yakusugi Land Course, which passes many cedar trees and is ideal for those with young children, to harder hikes lasting for six hours, such as the Shiratani Unsui Gorge which provides incredible scenery. The most notorious is the Jomon Sugi Course, which lasts for nine hours and covers 22km!

Kyushu has plenty of gorgeous trails for any hiking enthusiast, so if you are in Kyushu and want to experience nature, be sure to give any of these beautiful trails a chance!