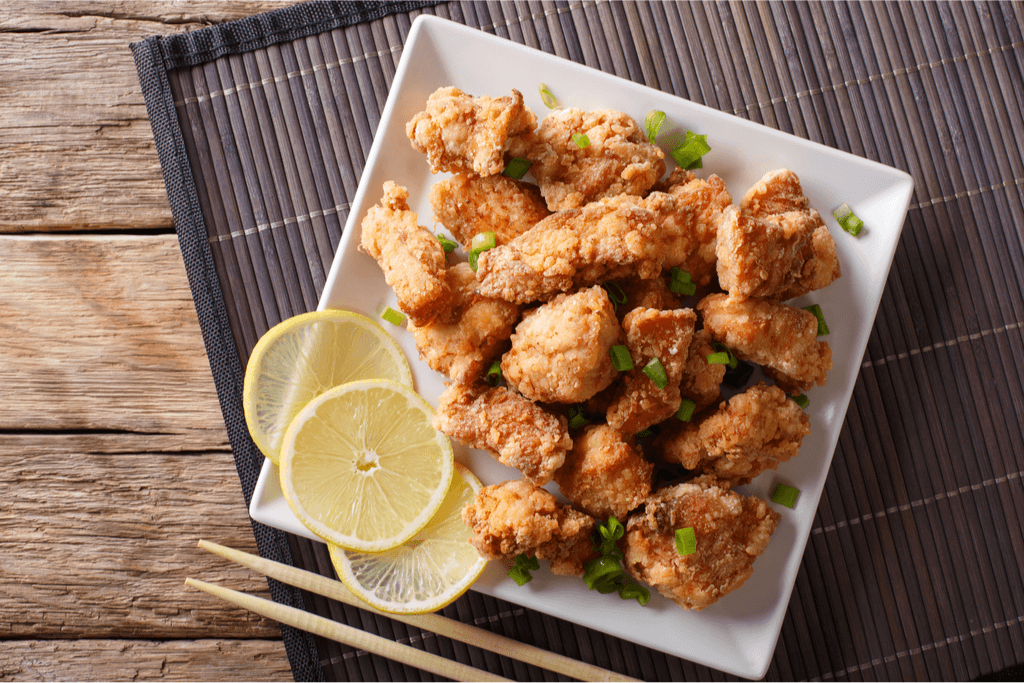 Karaage, also known as Japanese fried chicken is golden, juicy and crispy. It comes in many varieties from all over Japan, and utilizes many different flavors. In this piece, we will explore what makes karaage unique, its origins, and its worldwide fame.

Karaage（唐揚げ） is the name of a cooking technique where people lightly coat meat and vegetables in flour before deep-frying it in oil.

While this seems similar to another popular Japanese deep-fried dish, tempura, karaage ingredients are marinated before coated in starch. Meanwhile tempura style uses a thick batter instead. These days however, karaage is synonymous with chicken.

The word “kara” （唐）in karaage is a tribute to the legacy of the Tang Dynasty in China, which uses the same kanji. Because of this, “kara” once referred to things of Chinese origin.

Modern Japanese fried chicken was originally introduced to Japan through Chinese chefs when they would deep fry tofu in a similar manner for vegetarian meals.

However, it wasn’t until the 1930s when karaage finally debuted on a restaurant menu and began marking its place in Japanese cuisine. The boom of karaage spread across Japan but became particularly popular in the city of Usa in Oita Prefecture.

Usa City, Oita is home to the first karaage specialty store, “Karaage Shosuke”.  Later on, [To commemorate this even further, there’s even a 2013 movie Karaage☆USA–featuring former Morning Musume idol Ai Takahashi. Both of these factors solidify the city and Oita Prefecture in general as the birthplace of karaage.

Eventually, the popularity of the karaage specialty stores would make its way over to the neighboring city of Nakatsu. The two cities boast many Japanese fried chicken stores specialty stores, ranging from restaurants to stalls, and each store every secret recipe is unique and strongly guarded.

Today, karaage has become a part of the city of Usa, from its city mascot ,“Usakara-kun,” to being a local staple food. As a matter of fact, the 2013 movie, “Karaage☆USA” features former idol Ai Takahashi as the lead role.

But Usa City isn’t the only place in Japan that boasts amazing karaage. Here are some other regional varieties that you can enjoy as well.

The words “sanzoku” and “yaki” mean ”bandit” and ”grilled” respectively. However, despite the word “yaki” in its name, this dish isn’t grilled, but deep-fried in oil instead. First, the chicken thighs are marinated in soy sauce with grated garlic and onions.

Afterwards, they are coated in potato starch before being deep-fried in order to make this dish. It is especially popular within Nagano and there is even a Sanzoku-yaki Appreciation Society at Matsumoto University.

This style of karaage is especially popular in Nagoya City. Tebasaki is crispy chicken wings coated with a savory sauce and sprinkled with a variety of spices. This gives the consumer a variety of flavors to indulge in. They are similar to American-style wings, although the crispy coating is second to none.

Although Usa City is where karaage specialty stores were born, Nakatsu City has their own unique style of karaage as well.

Many of the stores will often marinate their chicken in a blend of soy sauce, garlic, ginger, and other condiments including fruit. Not only is their karaage unique, but their stores sell chicken in a variety of ways, including gizzards and even cartilage.

Nakatsu City has another interesting Japanese fried chicken fact, a local story that has been passed down with pride. In the fall of 1990, the famous American fast-food chain, Kentucky Fried Chicken opened up a store just two kilometers from Nakatsu Station.

Many of the local karaage shops feared that it would spell their demise, but to their surprise, the KFC store had closed down by May 1995 due to poor sales and a bad location.

Nakatsu’s proverbial victory over KFC became a source of local pride among the karaage shop owners. In 2007, KFC returned to Nakatsu, this time situating itself closer to the station. It branded itself as not a competitor, but a different food altogether, finding a compromise with the region’s karaage stores.

In addition to its proverbial victory over KFC in Nakatsu, Japanese fried chicken is also world-famous.  Most notably late chef/food critic Anthony Bourdain said in 2016 that one of his guilty pleasures is Lawson (a convenience store chain in Japan) karaage. To put it simply,  he “never [got] on the plane without loading up on [karaage].”

Have you tried karaage before? What style do you like the best? Let us know in the comments below.