How to Use Kinako to Flavor Your Desserts at Home 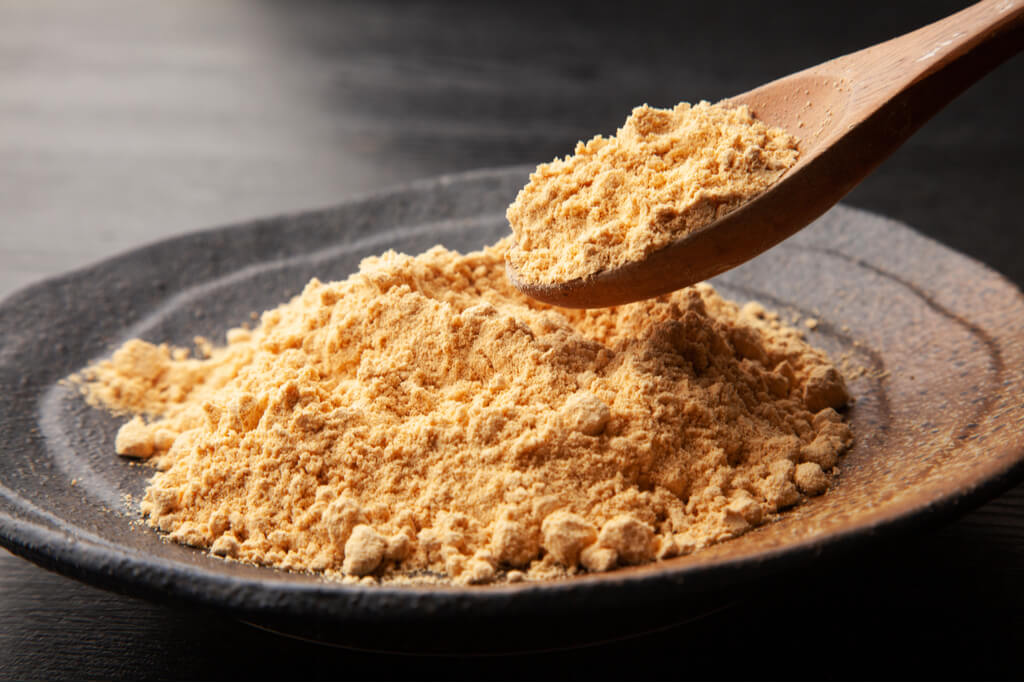 If you’ve tried Japanese snacks and desserts you might have noticed a brown powder covering the top of some of them. No, it’s not brown sugar, it’s a particular powder called kinako! Kinako is a popular Japanese topping used to help flavor desserts and snacks.

For a long time Kinako was only found in Japan, but the popularity of Japanese cuisine has helped bring this delicious flavor to an international audience.

The name kinako means “yellow flour” in Japanese and it’s made by grinding roasted soybeans. It has a similar powdery texture as all purpose flour and although soybeans typically have a savory flavor like in soy sauce or tofu, as a powder, it is actually quite sweet. The powder is golden tan in color, has a warm nutty aroma, and has a similar taste to roasted peanuts.

Texturally kinako is very fine, so it can be quite messy when eating it. Due to its high protein content and the fact that it’s gluten free, it’s additionally become a popular flavoring with health and food bloggers.

Where to Buy Kinako

This versatile ingredient can now be found internationally due to its growing popularity. Kinako is typically found at most Japanese grocery stores, however if you aren’t able to access one then it can also be purchased online or maybe even in your local health food stores.

Ready to discover Japan’s best kept culinary secrets? Sakuraco is shipping traditional Japanese sweets and snacks across the globe straight from Japan to your door.

How to Use Kinako in Japanese Deserts

In Japanese cooking, kinako is often used to flavor traditional and modern desserts. It’s especially popular for paired mochi and other wagashi treats. While the powder might not be as sweet as sugar it gives the desserts a roasted nutty flavoring.

Mochi is a very well known and loved traditional Japanese snack. It has a doughy texture and can be quite chewy for those who aren’t used to eating it. It can be found pretty much everywhere and kinako is often used as a topping to give it a sweet and nutty accent.

Botamochi are lumpy balls of sweet rice cake and anko (red bean paste). These desserts are sometimes rolled in kinako powder to give them a smoother rounder appearance. The sweetness of anko can be a little overpowering, so the kinako taste easily offsets anko’s sweetness.

Dango are mochi-like dumplings that are often served on a stick. Variations of these snacks, like mitarashi dango, are often found at festivals or in small traditional towns of Japan. Kinako is a common topping for dango since it offsets their chewiness and adds a bit of flavoring to them.

Warabimochi is a jelly made from ferns. It only has a slight taste on its own and is usually covered in kinako to give it a bit of flavoring.

How to Use Kinako in Western Desserts

This soybean powder has risen in popularity outside of Japan as a healthy sweet addition to desserts. Since it’s made from protein the powder is naturally packed with protein and makes your desserts delicious and healthy.

Vanilla is of course an obvious choice, as it really pairs well with any topping, but chocolate, strawberry, and even matcha are also great options to pair with kinako. If you’re a fan of shaved ice, also known as kakigori in Japanese, that’s also a great option.

To give your cookies and extra boost, this magic powder can be mixed together with white granulated sugar and flour and easily baked into your favorite recipe. A general rule of thumb to keep in mind is to replace ¼ of the total amount of flour needed with kinako. Be careful when mixing since kinako has a strong flavor, so it could overpower your dessert if you’re not careful!

Kinako is high in protein and is very popular among health fanatics. It can easily be incorporated into a shake or smoothie to give an extra protein boost. It’s nutty flavoring also makes it a great alternative to peanut butter.

Using kinako is a great way to mix up your already delicious desserts. It’s a perfect introduction to the world of Japanese desserts and it’s high nutritional content. Use it to top off your Japanese desserts like mochi and dango or use it as part of the base of your recipes as a nutritious addition.