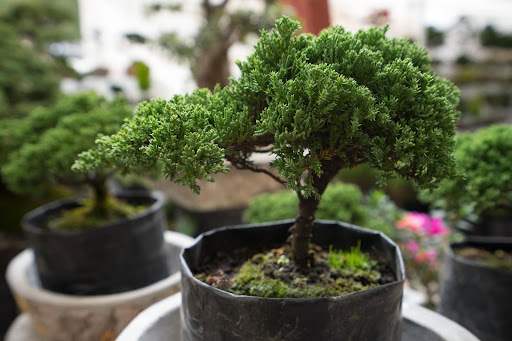 The bonsai tree has penetrated the cultural zeitgeist, being an element of refined, zen culture recognised from almost every corner of the world. However, bonsai trees often leave many aspiring owners stumped. Beginners come to the world of bonsai due to the tree’s beautiful aesthetic, but quickly come to ask “How does one take care of a bonsai tree?” or “Where do bonsai trees come from?” when researching bonsai trees.

The team here at authentic Japanese snack box Sakuraco are huge fans of bonsai trees and one day aspire to take care of our own mini tree. Often a confusing and mysterious plant with a reputation of being high maintenance, today we’ll take a look into these gorgeous tiny trees with a religious background.

Bringing the “Outside” Inside

The story of the bonsai tree begins in China somewhere within the first millennium C.E. Originally cultivated by buddhist monks, their goal was to bring the outdoors into the indoor space, particularly temples. The actual date they first appeared is not explicitly clear, however many have come to believe that small potted trees first appeared between 500 and 1000 B.C.E.

Appearing in Chinese art in the early common era (around 600 C.E.), it reflected a love of miniatures the Chinese people held, as it was believed that they held certain powers. Some even made miniature gardens, complete with trees and shrubs. The ceramic pot they were held in was of equal importance, creating a harmonious feeling between the miniature and the container in which it was kept.

Over time, the practice of cultivating miniature gardens, and specifically miniature trees, spread to Korea and Japan as Chinese influence spread across the east Asian region. The difference between the Japanese and Chinese bonsai trees is how well groomed they are, with Japanese one’s being highly groomed and Chinese trees being more focused on the natural form.

Japan sought to increase the quality of these miniature trees. As time went on, Japanese trees became world-renowned. During the post-World War Two period, as Japan became a symbol of success in the global stage, bonsai trees made in Japan became heavily sought after thanks to their superior quality. Through this, Japan became synonymous with bonsai trees.

Bonsai Trees in the Modern Era

Authentic Japanese snack box Sakuraco has a wide range of seasonal treats that perfectly match a spring picnic or cozy winters inside enjoying a bonsai tree. Experience the best Japan has to offer, from sakura flavored Japanese sweets,unmissable mochi and so much more. Discover what delicious snacks are coming to our Sakuraco family this month.

Undeniably, bonsai plants can be very high maintenance and might not be possible for everyone to raise. For those people, potentially a Lego bonsai tree could be an option, balancing elegance, practicality and a quirky sense of style.

Bonsai trees give people the ability to have a little piece of Japan in their home (quite literally). With the amount of care and love they require, many find cultivating these trees to be a difficult, but highly rewarding Japanese pastime.

Another beloved Japanese pastime is enjoying delicious food and drink in nature. The importance of matching your food or Japanese tea to the season can not be overstated, and a good match can bring out the full seasonal experience that has been beloved in Japan for centuries.