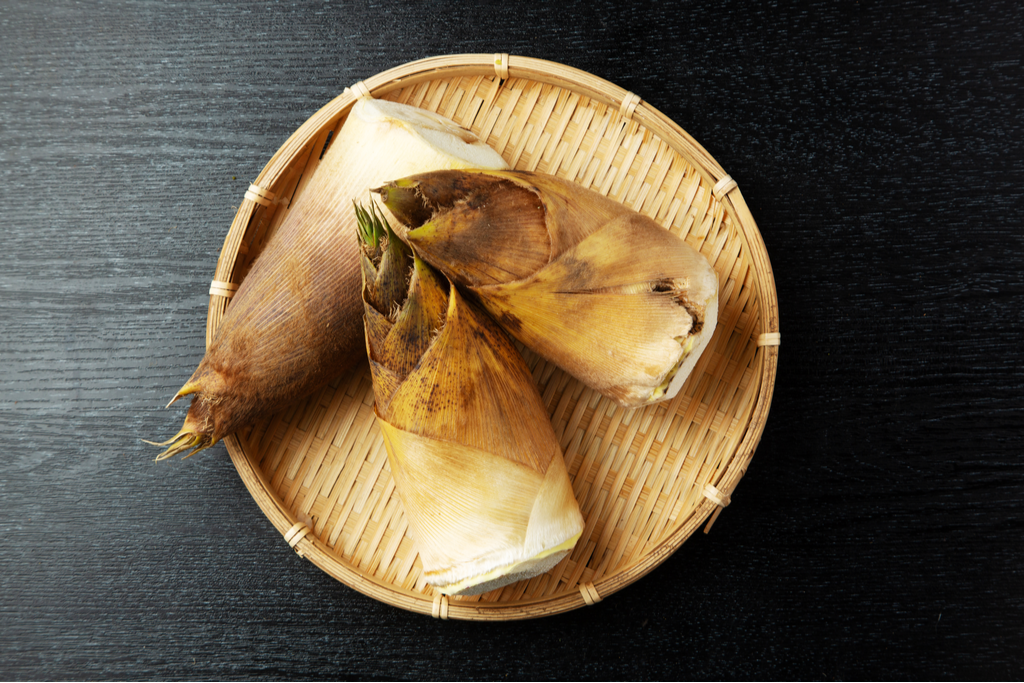 Bamboo grows almost anywhere in Japan. Not only is it admired in places like Kyoto’s bamboo forest, it is also a versatile material for crafts and construction. It has another use not as well known overseas however–food. Called takenoko in Japanese, bamboo shoots are one of many seasonal foods in Japan.

Seasonality is essential to Japanese cuisine and the importance of the concept of shun, seasonal ingredients, is reflected in the inventories of grocery stores nationwide. Not only do seasonal ingredients assure a healthy diet, they also tend to be symbolically charged. A characteristic ingredient of the spring season arrives at stores around March and sticks around until the end of May: takenoko, bamboo shoots.

Bamboo shoots are seen as an auspicious food and first appear at around the same time as another herald of spring in Japan, the sakura cherry blossoms. The timing and symbolism of their literal breaking through ground makes them the subject of haiku poems and even grants them their own season in Japan’s old calendar.

Rarely used today, the old Japanese calendar contained 24 major seasonal divisions, which were each split again into three very specific five day periods. Within these 72 divisions, bamboo shoots receive their own Japanese microseason around the 15th of May: ‘Bamboo Shoots Sprout’.

Interested in discovering the seasons of Japan through food yourself? Sakuraco sends a curated selection of traditional Japanese sweets and snacks to your door every month.

Anyone only familiar with grown bamboo stalks might marvel at the idea of eating bamboo, but shoots that have yet to break the ground are actually soft enough to be eaten raw. Unless you are an absolute takenoko lover heading out into the mountains to forage, however, you probably wouldn’t attempt this. Quite a few people do though, paying close attention to the weather to harvest wild shoots at just the right time.

As soon as the shoots are exposed to sunlight and begin photosynthesis, they gain a sharp and bitter taste, which needs to be considered when preparing them. Harvesting takenoko is basically a race against time as they taste better when cooked right after harvesting. Regardless of the exact time of harvest however, shoots need to be boiled for about an hour before they are ready to be enjoyed.

After boiling has eliminated their bitterness, takenoko are usually used for a variety of simple spring dishes such as:

Simmered bamboo shoots, Tosa-ni
Incredibly simple, this side dish involves simmering bamboo shoots in a katsuobushi (dried bonito) and soy sauce broth. It can be enjoyed as an appetizer, side dish or with sake.

Takenoko Gohan
Literally bamboo shoot rice, this is the most typical takenoko dish and a must-have in spring for most Japanese people. The crunchy and fragrant bamboo shoots are cooked together with the rice, giving it a subtle earthy spring flavor.

Yaki Takenoko
Pre-boiled takenoko are marinated and then skewered to be grilled over charcoal. Perfect for a healthy BBQ snack.

Takenoko are not just eaten at their freshest in spring however, they are also used to make a condiment you have most likely already encountered if you’re a fan of Japanese ramen: menma.

Menma are bamboo shoots that have been boiled, dried, sliced and then fermented. A popular topping for all kinds of Japanese soups, it can also be had as a snack by itself.

Unlike crunchy bamboo shoots, menma has its own unique smooth yet tender texture. Its flavor is slightly salty but mild, so it does not overpower the soup it is served in.

Besides bamboo shoots’ strong seasonal connection, the whole plant plays an important role all year round. Strong and fast growing, it’s seen as a symbol of prosperity and vitality.

An auspicious decoration made of cut bamboo stalks, pine and plum tree branches called kadomatsu appears in pairs at the entrance to Japanese houses over the New Year’s period. Representing prosperity, longevity and steadfastness respectively, they invite in a fortune bringing deity known as toshigami.

Bamboo is also central to Japan’s oldest work of fiction: The Tale of the Bamboo Cutter, also known as the Tale of Princess Kaguya. Written by an unknown author in the late 9th or early 10th century, the story revolves around a princess from the moon, discovered as a baby by a poor bamboo cutter within a glowing bamboo stalk.

Beyond its deliciousness and symbolism, bamboo is also still an essential material for Japanese food and drink preparation. There would be no sushi rolls without makisu, a bamboo rolling mat, and no Japanese tea ceremony without chasen, a bamboo whisk used to make matcha tea.

Bamboo continues to be important to Japan and for good reason. Have you tried eating bamboo before? Let us know what you thought in the comments below!