Discover the Japanese Star Candy Konpeito, a Colorful Sweet With a Surprising History 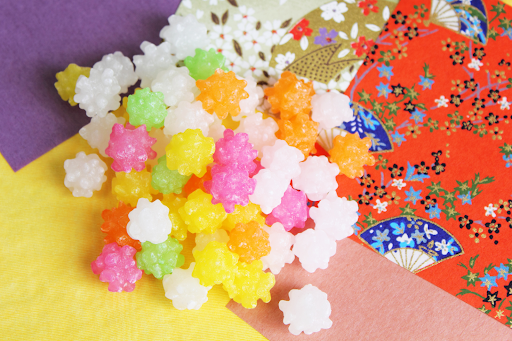 Found in traditional candy stores across Japan – Konpeito is one candy that every Japanese person is familiar with.

It’s not that hard to recognize what they look like; this popular Japanese candy reminds us of the shape of the soot sprites from the Studio Ghibli movies My Neighbor Totoro and Spirited Away, except these Japanese sweets are a lot more colorful.

However, even if you might have seen this Japanese star candy before, you might not be aware that it has a history going all the way back to the 16th century. This means that they’ve pretty much been in Japan for around 500 years now! If that astounds you, we’re here to tell you more about these star-shaped treats and how they’re one of the food items that have had a surprising role in the history of the land of the rising sun.

The 500-Year History of the Japanese Star Candy Konpeito

To take a full look at the origins of the sugar candy, konpeito, we need to take a look at Japan during the 16th century. This was an early period when Japan was receiving trade and visitors from foreign countries outside of Asia. One of the countries that Japan was trading with at the time was Portugal.

Portugal is a country that actually has had some visible lasting influence in the food of Japan. For example, tempura is best known as a deep-fried Japanese dish, but it actually has its origins in Portuguese people who were living in Japan during the 16th century and who introduced a fritter cooking technique that enabled tempura to become a reality.

The popular Japanese candy, konpeito, is another example of a food product that was introduced by Portuguese people to Japan. During this time, Japan did not have the techniques needed in order to refine sugar, and without refined sugar, products that rely on them heavily, such as candy, were impossible to produce.

Portuguese traders then introduced their techniques, however, since konpeito uses a lot of sugar, those early sugar candies became an expensive and highly valued product in the country. In fact, one of the most famous historical figures of Japan was one of the first-ever people to get to taste konpeito.

Oda Nobunaga, the most powerful feudal lord or daimyo during the mid-1500s, who eventually became known as the “Great Unifier of Japan”, received a glass flask containing some konpeito from a Portuguese missionary as a gift for obtaining permission to do Christian missionary work in Japan. So if you ever get your hands on konpeito, you can pride yourself in thinking that you’ll be able to experience the exact same type of candy that Oda Nobunaga was able to try almost half a millennium ago!

By the time that the Meiji period of Japan (1868 to 1912) rolled around, konpeito had already become fully recognized as an essential Japanese candy. In more modern times, konpeito candies were one of the food items that was included in the Japanese Imperial Army’s Military Combat Rations tins, along with bread and biscuits. It is also included in the Ministry of Defense’s Emergency Food Ration tins, and they explained that they wanted the colorful nature of the sugar candy to help reduce stress during a disaster.

Aside from dire emergency situation uses, this star shaped candy is also used in more cheerful or celebratory purposes. In Japan, a bonbonniere is a luxurious candy box that is used as a wedding gift for members of the Imperial Family when they get married. Bonbonnieres were chosen as the prescribed gift during the marriage of Akihito, the emperor of Japan who reigned until 2019, to his current wife, Princess Michiko.

In this context, although it’s also known as a ‘candy box’, a bonbonniere isn’t exactly a box per se; it consists of a fine china bowl that is lavishly decorated and also comes with a lid, and inside it is filled with a type of Japanese candy that the gift giver chooses — which in many cases would be konpeito. Despite being what is a relatively simple candy, it’s nice to see that even the imperials of Japan appreciate this simple but sweet confection.

What You Need to Know if You Want to Try Konpeito

If you want to try konpeito, there are a few things to keep in mind. Nowadays, there is some variety in the type of star candy that can be found in Japan. In things like grocery stores or convenience stores, you can find more affordable types of konpeito that come in small plastic packs.

In more traditional confectionery stores or specialized stores, there are also slightly more expensive types of konpeito. They are handmade by artisans and often use specially produced sugar.

Don’t be fooled by its simple appearance, the Japanese star candy konpeito is favored by imperials and has an origin story that connects it to Oda Nobunaga. And with every piece of konpeito in your mouth, you’re enjoying a piece of candy that has played its own role in the history of Japanese culture.