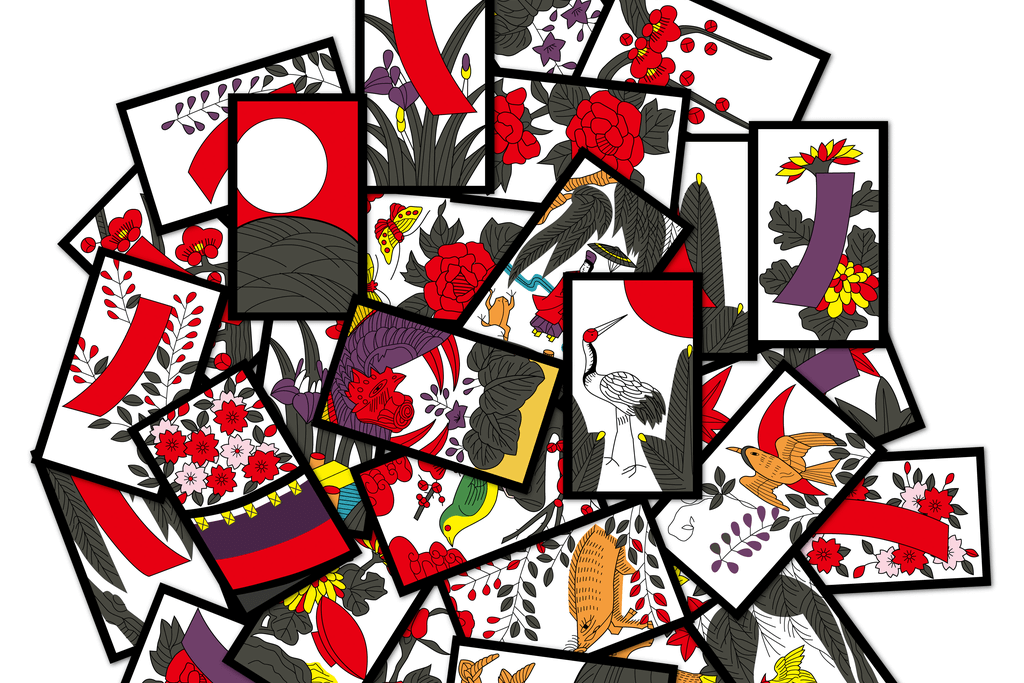 Hanafuda, also known as “flower cards”, are a form of Japanese traditional playing cards.  While there are many traditional games and toys that existed long before video games, hanafuda has a rich history dating all the way back to the elegant and storied Heian Era. Read on to learn more about hanafuda’s origins, its growing popularity and how to play the classic hanafuda game, “koi koi”.

Mono-awase: The Predecessor to Hanafuda

The history of hanafuda begins in the Heian Era (794-1185).  Back then, the aristocratic elite didn’t compete with playing cards, but rather various collected objects.  The most common items included fans, painting and especially shells.

Objectively, the goal of this game was to judge the quality and uniqueness of each object.  They called this game mono-awase (ものあわせ literally “object comparison”) .  In order to play this game, the participants divided themselves into teams of two: “Left” and “Right”.

To put it simply, mono-awase was a battle of wits. Each member of the team would present an object, and had to speak of its beauty in a creative way.  Some would do this in the form of a traditional waka poem, while others would sing.

A predetermined judge would give points to each team, depending on the quality of each member’s presentation.  At the end of the game, the team with the most points won.  This battle of wits and words would carry over into hanafuda, which wouldn’t make its debut until over four centuries later.

“Flower Cards”: The Rise of a New Pastime

In mono-awase, participants compare a variety of objects.  However, kai-awase (貝合わせ, literally “shell-comparison”) maintained its presence throughout the centuries. At first, game participants used organic shells.  Over time, the shells became more ornate.

Gilded shell sets in particular were popular bridal gifts during the Muromachi period (1336-1573).  Artisans often painted them in gold, and they were heavily circulated amongst the elite. Nevertheless, it was the common folk of the Edo period, along with influence of Portuguese trading cards, that would give rise to hanafuda (花札, literally “flower cards”).

Hanafuda cards are the combination of kai-awase and hana-awase (flower comparison), except standardized in a 48 playing card set. People know it for its eye-catching art, perfectly organized by 12 suits, one for each month of the calendar year. These suits are depicted on the cards’ faces, and include poetry ribbons, ornate illustrations of flowers, birds, etc.

Despite its growing popularity, officials banned hanafuda during the Kansei Reforms (1781-1793).  This was because the cards were used for gambling.  Yet, it wasn’t just hanafuda cards that were prohibited. Playing cards of any origin (i.e. the now standard 52-card deck) was also banned.

However, the officials lifted the ban around 1885, during the Meiji Restoration. While it took a little more time for hanafuda to shake the reputation of gambling, it’s now a game that everyone can enjoy and learn to play.

Koi koi (こいこい, literally “come on, come on!”) is the most popular game played with hanafuda cards. To put it simply, two players have to match cards based on their assigned category in a specific order.

There are many variations to these rules, but this is how Japanese people use hanafuda cards to play koi koi at its most traditional level.

Playing hanafuda cards offer one of the most traditional Japanese recreational experiences. In current times, most people in the world connect Japan to video games.  Yet it is this game, borne from an ancient battle of wits and object comparisons, that perfectly encapsulates the elegant simplicity of traditional leisure in Japan.

Do you own a set of hanafuda cards? Have you ever played koi koi before? Let us know in the comments below!