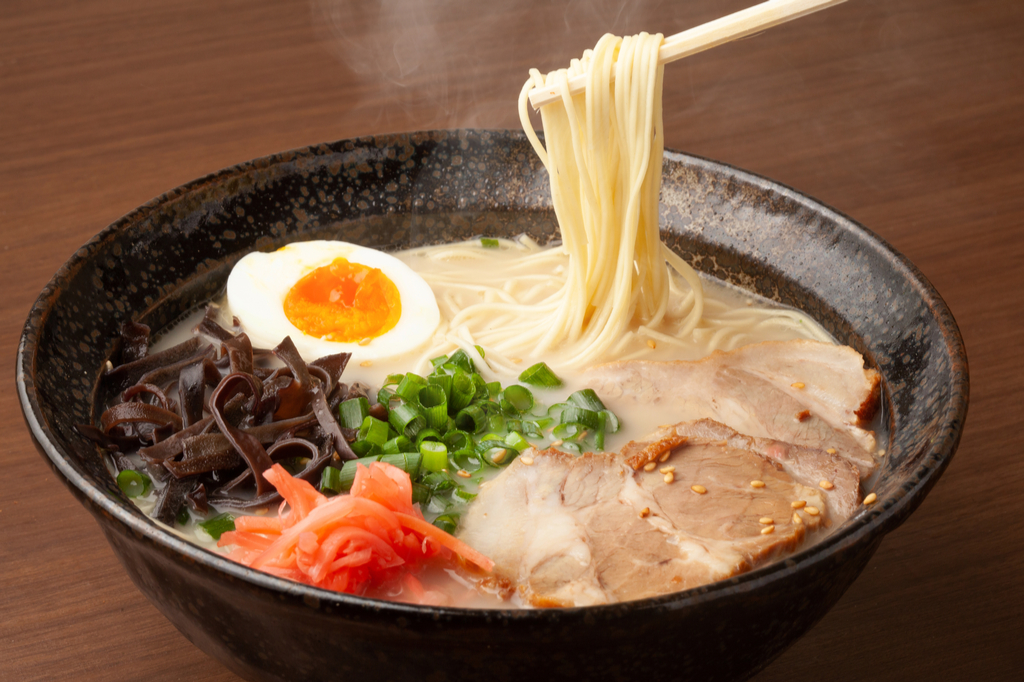 Originating in Fukuoka on the southern island of Kyushu, Hakata ramen (otherwise known as tonkotsu) is world famous for its rich pork bone broth and perfectly al dente noodles. But how did this style of ramen come to be? And what makes it so special? Read more to find out.

Tonkotsu ramen is actually a more modern creation, compared to the classic shoyu (soy sauce) and shio (salt) varieties, which came to be at the end of the 19th century in Yokohama Chinatown.

The earliest version of tonkotsu ramen was first sold at a food stall in Kurume, Fukuoka in 1937 but at that time it was called “Chinese Soba” and although the broth was made with a pork marrow base, it was initially clear, not cloudy.

The owner of the stall sold his creation to shops in the business district of Fukuoka city, known as Hakata where it soon became popular. In the 1950’s, it was served from street vendors, or yatai in Japanese, to hard working laborers at fish markets in post-war Japan. The dish was cheap and offered a rich and hearty meal that would keep them going throughout the day.

The key to all good ramen starts with the soup broth, and tonkotsu is no exception. Made with hand cleaned pork bones, the method is slightly different from shoyu and shio ramen. Instead of being cooked at a low simmer, tonkotsu broth is brought up to a full rolling boil. This is what gives the characteristic milky appearance due to the collagen and fat dissolving in the bone marrow.

Each ramen shop has their own secret recipe and method, but generally the broth base for tonkotsu ramen is made from pork bones, onions, spring onions, pork back fat and ginger and is usually prepared a day in advance to give lots of time for the flavors to develop while boiling away (sometimes up to 18 hours).

After the pork bone-based broth, one of the most distinguishing features of this style of ramen is the noodles. Hakata ramen is famous for having very thin noodles in comparison to Kansai and Kanto, which can be ordered in three different textures: hard (kata), normal (futsu), or soft (yawaraka). Because the noodles are so thin, it is customary to add small batches of noodles to the bowl as they soften quickly in the hot broth. Customers are encouraged to order more noodles as they make their way along to ensure they are always just the right level of firmness. This style of adding in extra noodles bit by bit is called kaedama.

The general philosophy around Hakata ramen is that less is more and the noodles and broth should be the stars of the show.

While ramen restaurants outside of Japan can get a bit pricey due to the labor involved in making the broth and the cost of importing some of the ingredients, in Japan, it is rare to pay more than 10 dollars for a bowl.

Ramen is an incredibly popular dish in Japan, which is a key factor that keeps the cost of ramen low. Another is how it is eaten. Many ramen shops have individual seating for diners to enjoy their meal in peace, and quickly. Ramen is best eaten hot before the noodles get soggy, so speed is of the essence. This allows shops to have a quick turnover and sell many bowls during peak hours at lunch and after work.

Are there ramen shops where you live? What’s your favorite kind? Let us know in the comments below.