The Curious and Crunchy Japanese Melonpan 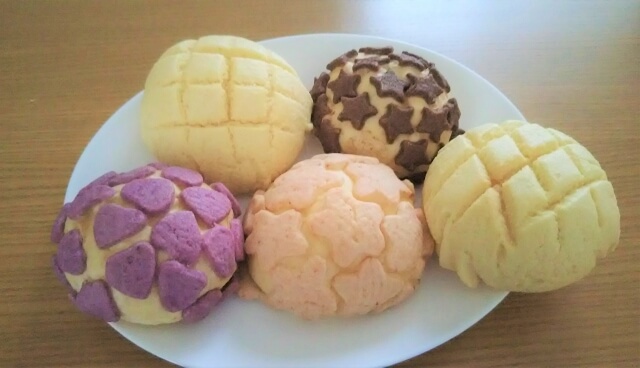 Not everyone has a sweet tooth, but you likely wouldn’t be here to learn about one of the top treats in the pantheon of Japanese sweets if you didn’t. So sit back and behold the reasons why the melonpan holds a special place in the heart of many Japanese food lovers.

Melonpan is a type of sweet bread with a thin cookie dough covering that is liberally sprinkled with sugar. A signature cross hatching pattern is often featured on the dough covering, but other patterns are sold as well. Melonpan are found at local bakeries, konbini, specialty shops, and street vendors across Japan, so needless to say, if you have a craving for a melonpan, you don’t need to look very far.

The name is a combination of the Japanese word メロン – borrowed from the English word “melon,” and パン – borrowed from the Portuguese/Spanish word “pan,” meaning bread, effectively being called “melon bread.” The name of this treat comes from a long Japanese practice of creating words from various global origins, but in the end creating something uniquely Japanese.

The treat fits into a category of sweet Japanese breads called kashipan, which includes well known treats such as anpan, jamupan, and chocopan. This category almost always refers to bread with a specific filling that gives the pastry its name to be eaten at room temperature. Melonpan, however, originally has no filling, and the association with melon referred to its shape while its flavor was simply sweet bread.

But over time something magical would happen. Not only did melonpan begin to be produced in a huge variety of flavors including melon, chocolate chip, matcha, and strawberry, filling the melonpan with cream, custard, jam, sweet bean, and even ice cream would become a major hit.

(The ice cream filling in a fresh original flavor bun is my personal favorite. I literally dream about it.)

Vaing for melonpan supremacy, pastry producers offer an ever increasing flavor and topping range, which is arguably the best part about the treat as a whole. Exploring Tokyo and wider Japan for flavors and combinations that you have not yet tried is among the noblest of past times, and don’t let anyone tell you otherwise.

The shape of the melonpan is also the subject of mild debate, but it ultimately reveals regional differences. In most parts of Japan the round bun with cross hatching on the cookie covering is considered a melonpan. However, in Kobe and Hiroshima a melonpan is an oval or seed shaped bun with parallel ridges, while a round shaped bun with a sunburst pattern on the top layer of dough is referred to as a Sunrise (サンライズ).

As with many culinary inventions, the origins of the melonpan are largely unknown. However, the popular account is that an Armenian baker named Hovhannes (Ivan) Ghevenian Sagoyan was apparently “discovered” in a hotel in China by a worldly Japanese noble named Kihachirō Ōkura in 1917, and subsequently brought to Japan where he would go on to “invent” the melon shaped pastry. Whatever the truth may be, we owe many thanks to the genius that has brought our taste buds the blessing that is melonpan.

Melonpan is very similar to the pineapple bun from Hong Kong, as well as other similar buns from Taiwan and China, which may hint at it’s true origins or merely part of Japan’s 20th century habit of exporting its culture to its neighbors. The pineapple bun is more dense, moist, and flaky with a buttery center compared to the Japanese melonpan which is slightly more dry, fluffy,  and with a more crunchy covering.

The melonpan recipe is not exactly simple, especially when a sweet filling is included, but when the masterpiece is complete there will be no further complaints. The basic way is to start by making a bread dough with bread flour, yeast, sugar, milk, butter, and eggs. After letting it rise and kneading out the gases, make small dough balls that will be wrapped in a thin layer of sugar cookie dough. The cookie dough is made on the side with cake flour, butter, sugar, eggs, and baking powder. Once you have a dough ball wrapped in a cookie, cross hatch the cookie layer and bake to perfection.

The flavor of a melonpan largely depends on the type you are going for. Starting with the granddaddy of them all, the original flavor is a sweet fluffy bun of delight. The inner portion is soft and satisfying to bite into, while the outer cookie layer is glazed over with crystalline sugar specs and is perfectly crunchy – all of which rounds out a chomping experience that makes one want to crack a childish smile. As the bun dissolves in your mouth, the full extent of the sugar and butter become clear, and in that moment, the world seems to be set right. Naturally you can go for all manner of fillings, flavors, and toppings that will cleverly tweak this experience slightly, leaving you craving for more.

If you started this article unfamiliar with melonpan, I hope I have brought you up to speed. The next thing for you to do is to go out and get one! Tokyo and other parts of Japan boast some killer specialty shops, like Kagetsudo in Asakusa and the Melonpan-Ice chain throughout the main islands. If you’re feeling adventurous, perhaps even make some at home yourself!