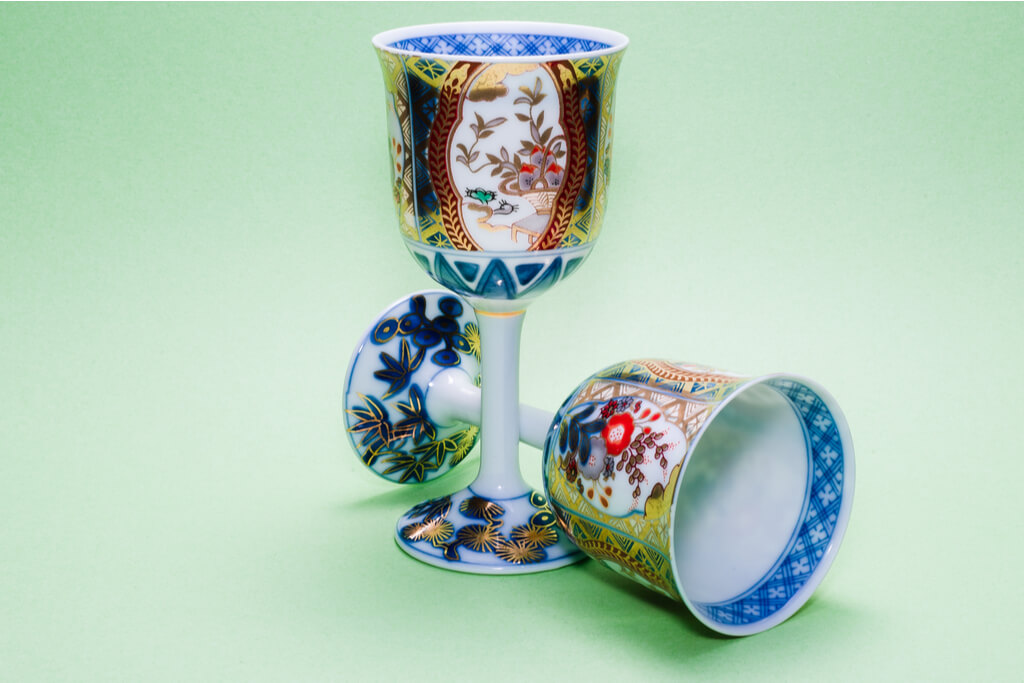 In the world of Japanese ceramics, Japanese porcelain often sticks out as reigning supreme. The classic Imari ware combined white and blue to make beautiful pieces, popular around the world. However, Kutani ware is another signature Japanese style that stands out with its unique color combinations and interesting history.

Let’s learn all about this classic and colorful traditional art.

The History of Kutani Ware

Kutani ware’s unique and fascinating history starts in the early Edo period. The first recorded mention of this style was in 1655, but its history dates back to the earlier 17th century.

Pottery stone was discovered in the mines of Kutani, located in what is now Kaga city in the Ishikawa prefecture. At that time, the Maeda clan owned the land, and after finding the pottery stone, the daimyo (feudal lord) of the Kaga Domain sent a man named Saijiro Goto to Arita to learn how to make the porcelain.

Arita was, and still is, known for its porcelain arts called Arita ware, making it perfect for Goto’s studies. Goto returned to his village of Kutani after his studies and established a kiln there.

Interested in bringing more Japanese culture, like Kutani ware, into your home? Sakuraco sends traditional Japanese snacks, teas, and even dishware right to your door.

Some say this style was influenced by the location. The Hokuriku region, which Ishikawa is a part of, tends to have somewhat long, harsh, and gray winters, so the artists at the time might have leaned towards bold colors to contrast that. Others say that the colors were inspired by Chinese pottery, which already featured some vivid colors. Either way, this new style was a huge success and gained popularity for decades after the kiln was established.

But for some reason, around 1730, the Kutani kilns all suddenly closed. Actually, no one even knows exactly why it closed. Theories include financial difficulties, a shift in power for the regional government, lack of resources for certain colors, and even rumors of smuggling.

For over 80 years, this style just disappeared. Now, any Kutani ware pieces made before this time are referred to as ‘ko-Kutani’ (old Kutani) and are extremely rare and valuable.

In the early 1800s, however, there was a sudden revival of Kutani style by craftsmen. Not only was there a discovery of porcelain in another mine, but a new kiln was opened in Kutani. This was the birth of Saiko-Kutani (renewed Kutani). Now, in addition to Kutani’s signature 5-color combination (green, yellow, red, dark blue, and purple), there was a new addition to the Japanese porcelain – gold leaf.

Gold leaf is actually one of the techniques that Ishikawa is known for to this day. Saiko-Kutani became distinguished for its use of deep red and gold leaf, together or separately, featuring beautiful and even more bold colors and designs than its predecessor.

Kutani saw an increase in popularity on a global scale in 1873 when it was featured at that year’s Vienna World Exposition. This exposition skyrocketed the popularity of this Japanese ceramics style, and it was then exported to many places around the world.

As this happened, however, the style was positively impacted by Western exposure as well. Western techniques helped to make production more efficient, and Western-style colors were also added for more unique combinations.

Since then, Japan has done a lot to protect the longevity of this art. For example, it was officially recognized as a traditional art, some masters have obtained the designation of “Living National Treasure”, and several masters have created different styles, variations, and products of Kutani ware.

Kutani ware is similar to Imari ware in many ways because it uses overglaze painting to achieve a beautiful final product. After pottery clay is formed, it is sun-dried and then put into a kiln at a temperature that actually changes the pottery to a beige color.

It’s then glazed in a white overglaze enamel called hakuyu, which leaves a transparent and glassy effect after firing. It is then fired for a second time. Finally, the product is painted with several colors and fired a third time to fuse the glaze and the paint. If gold leaf is used, one more layer of glaze is used after the gold leaf is applied, and it’s fired a fourth time.

With its long history and beauty, it may have a very gorgeous and expensive image. However, kutani ware is rather accessible. It can be found at many different price ranges with many different patterns, designs, and forms. Tea sets, tableware, and sake sets are the most common applications of Kutani-yaki that are both easily available and affordable, making it a normal part of Japanese table settings.

There are also plenty of art pieces made with this technique, including vases, animal-shaped pieces, and incense burners.

That being said, it was recently discovered that a lot of kutani-yaki pieces were made in Atari, not Kutani. So, recently some have started to group this style under the Atari ware umbrella. If you buy or own a piece, check to see where it is from to see if you have true Kutani ware.

This style, with it’s long and interesting history, has earned its position as one of Japan’s traditional representative arts. Whether it is as an art form or as part of your home tableware, please take some time to appreciate this amazing art style.