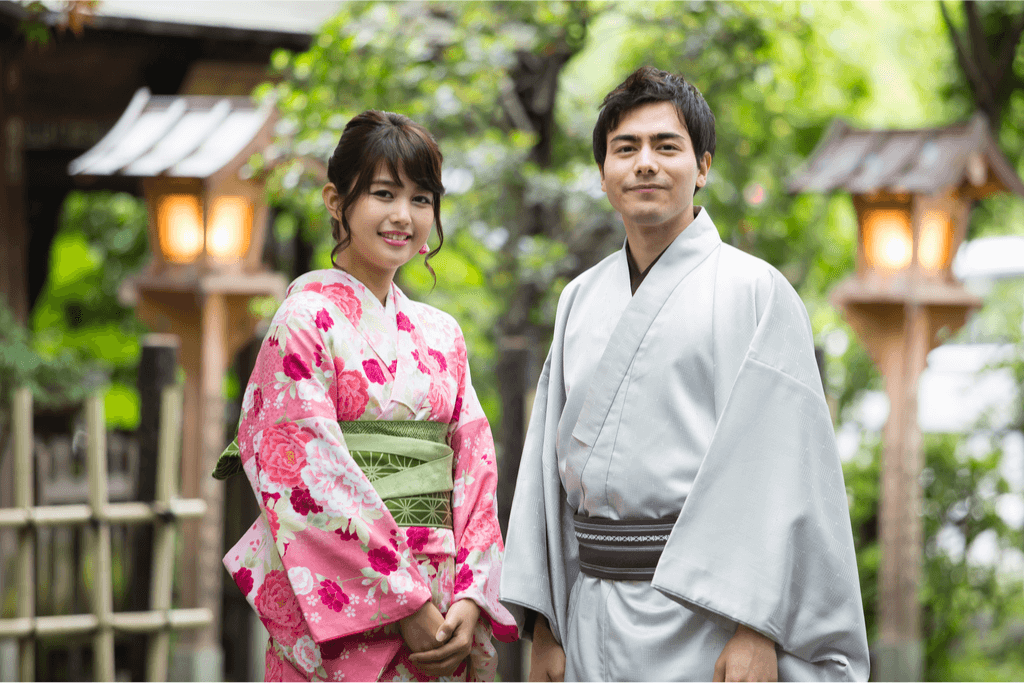 The modern kimono dates back to the Heian period (794-1185). Kimono materials consist of textiles, cotton, linen, and silk. Depending on the type of fabric and style, the price of a kimono is also different.

The cloth is around 12-13 m long, 36-40cm wide, cut into eight pieces, and sewn together to create the basic shape of a kimono. The fabrics are stacked and fixed by the Obi.

Not only is it unusual from the design, but the process of wearing kimono also requires understanding the proper steps. It usually has only one size, and the wearer needs to tie it to fit the body.

Men’s kimono, on the other hand, are usually dark blue or black. Instead of an elaborate pattern, they have a simple embroidery of their family crest. On the other hand, kimonos for women have many types depending on the person who wears them, the time, the event, and the location.

Furisode is for single young girls with bright colors and many decorative patterns on delicate silk, and its most notable feature is its long and wide sleeves. This kimono is for important events such as the Coming of Age ceremony (January 20th) and graduation ceremonies in March and April.

Tomesode is a formal dress for married women. Unlike furisode, its sleeves are short, and the primary color in the body of the kimono is black. There might be simple patterns with elegant colors near the bottom of the kimono.

Houmongi is primarily for married women. They usually wear them in tea ceremonies, family gatherings, or ceremonial visits. The houmongi is similar to a beautiful painting as its patterns are all connected to create a big picture. In the past, Japanese parents usually considered Houmongi as a gift to their daughter when she got married.

Tsukesage is traditionally for parties, flower arrangements, and friends’ weddings. It has a single and bright pattern running along the body and back of the shirt.

Komon is worn on regular days and is decorated entirely with small and gentle motifs.

Tsumugi is worn on casual occasions but with brighter and more simple patterns.

Uchikake is used as a jacket over the Japanese bride’s kimono on the wedding day. It’s usually red and designed with floral motifs, lovebirds, and cranes. In Japanese mythology, cranes are thousand-year-old creatures that symbolize longevity, bringing luck to couples.

Today, most Japanese brides choose the traditional white Japanese uchikake dress because of its pure and elegant beauty.

Under the uchikake, the brides wear shiromuku – the most formal, pure white kimono. Although simple, it has a deep meaning: to present the bride’s beauty in her purest form and to symbolize the beginning of a new journey.

Shiromuku has a round tail and is long enough to reach the ground. It also comes with a white cloth headband called tsunokakushi.

Yukata has a similar shape to kimono but uses cotton fabric, thin and light, easy to absorb sweat, and brings comfort to the wearer. Thus, the yukata is for summer and spring due to warmer weather and more effortless movement.

Nowadays, yukata are at summer festivals or after bathing. In the past, Japanese people wore yukatas as pajamas with simple seams and colors, today, it has become a favorite summer outfit of Japanese youth, so it gradually becomes more eye-catching.

Hakama are traditional Japanese trousers with pleated, flowing legs. Though woodcutters were the first to wear them, hakama is a mainstay in Japanese fashion.

Men usually wear them in most situations and female graduates on occasion. Athletes in classic Japanese sports such as archery or judo wear hakama. However, there are also contemporary versions of hakama, and trendsetters wear them with everyday Western clothing.

Fundoshi are traditional Japanese men’s clothing with a loincloth commonly worn by men in manual labor. If you can attend the Hakata Gion Yamakasa in Fukuoka, Kyushu Prefecture, you might see men and boys wearing fundoshi during the festival’s activities.

A Hanten shirt is a type of clothing that is very popular among Japanese commoners; that started in the Edo period (1603-1867) and gradually became more widespread in the 18th century.

Hanten is a type of everyday jacket by vendors or artisans in craft villages. This jacket has a collar sewn with black satin fabric, with a tie in the middle, suitable for everyone, regardless of gender.

Because the Hanten shirt is relatively thin, so to wear it in winter, people will braid a kimono bra both inside and outside to help keep the body warm.

The first happi shirts came from cotton fabric in brown and indigo, but now to meet current fashion needs, the shirts now have more eye-catching colors.

Which of these types of traditional Japanese clothing have you heard of before? Have you ever worn them as well? Please share your experience with us in the comments below!