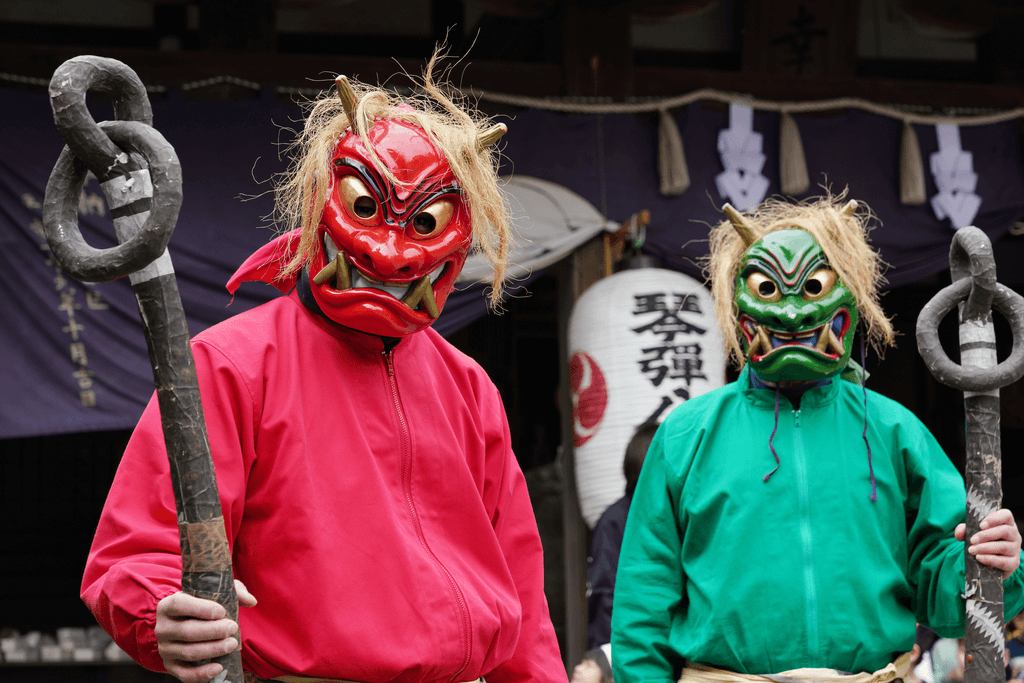 The term oni is used to describe the mythical demon or ogre that often appears in Japanese folklore. Alongside other famous creatures like the Japanese kappa, the Japanese oni is one of the most famous yokai (Japanese ghosts or spirits) demons in Japanese culture.

Let’s have a closer look at this mysterious Japanese demon.

Not much is known about when the Japanese oni first originated, but many theories point towards Buddhism as playing a part in the birth of the ogre in Japanese mythology. It is assumed that onis did not actually originate in Japan but were rather brought to the country along with Buddhism, from China.

The demon (oni) is said to be the reborn spirit of an evil person who died, or even the spirit of someone who was wronged in their previous life – much like a ghost in Western mythology.

The name ‘oni’ comes from the Japanese reading of the Chinese character for ghost – 鬼. Originally, it is thought that the term ‘oni’ actually referred to any spirit, monster, or ghost, but gradually evolved to mean the oni that we know today.

Well, onis generally have the same shape as people, more often than not men, with horns. Sometimes female oni are depicted in literature, but they will have always started off as a male form, turning female-like when they are jealous.

Oni are said to be bigger than a grown man, towering over humans; and scary, coming in colors of red, blue, or green. It is not known why the oni are these colors, but it is rare to see another color of oni. They often have big, scraggy beards; wild, staring eyes; sharp claws; and long, sharp teeth.

Oni are generally depicted wearing a loincloth, a small piece of tiger skin that covers their modesty parts, but nothing else.

They also have one or more horns on the top of their head, which are said to be those of an ox. This combination of tiger (for the loin cloth) and ox (the horns) is a reference to the Japanese word for northeast. Consequently, this direction is believed to bring bad luck.

An oni is believed to be very strong as well, hence they can overpower humans.

Looking to enjoy a cup of Japanese tea or snack while reading up on Japanese mythology? Check out Sakuraco! Sakuraco sends authentic Japanese snacks, sweets, teas, and tableware straight from Japanese local makers right to your door! So enjoy a taste of Japan and read up!

Traditionally, Japanese oni are said to be incredibly evil and take every chance they can to cast spells and generally make the subjects of their wrath have a terrible life.

Most oni reside in hell, along with all the other demons, and come up to earth to take human life and torture them. Burning houses, eating people, tearing them apart – all in a day’s work for a terrible oni.

Oni are said to come up from hell wielding giant iron clubs, which they use to destroy things in their path and humans too. They will go after any awful person – but not the really awful ones. This is because the worst ones humans will become demons themselves.

That said, in recent times there have been some nice stories about oni, depicting them as creatures who only want a bit of company. These stories about oni play on the oni’s similarity in shape to humans, by giving them human characteristics such as loneliness and companionship.

There are a few famous oni in Japanese demon lore.

The most famous is probably Shuten-douji. In this myth, the Shuten-douji is responsible for many women from a countryside village going missing.

A group of warriors decide to go and save the women, meeting the Shuten-douji demon who has been doing all the kidnapping. They knock it unconscious with a special drink and cut off its head. Even though it is detached from the body, the head tries to bite the lead warrior, who keeps it away by putting on two other helmets.

At this point it is said that the demon is defeated and returns to its true form, at 50 feet tall and with fifteen horns! The warriors take the body back to the village to show everyone that they killed the demon.

In more recent times, as mentioned, there have been stories about kind demons, such as The Red Oni Who Cried.

Other Japanese folktales of note are Momotaro the Peach Boy and The Oni Mask.

Today, oni are celebrated in popular culture and even have an important part to play…not just on Halloween. Every year, March 7th is Setsubun or ‘Bean Throwing Day.’ For Bean Throwing Day, someone sports an oni mask and tries to scare children, who drive it out by throwing dry beans at it while chanting: ‘Demon Out! Good Luck In!’

You may have heard the term ‘oni’ in the Japanese anime series Demon Slayer. However, this depiction of this creature is more like a vampire and a bit different to the traditional version.

Oni can also be found in other TV shows and video games, both as masks or as characters. See if you can find an oni for yourself!