Anpan Is a Popular Japanese Pastry With a Heroic Reputation 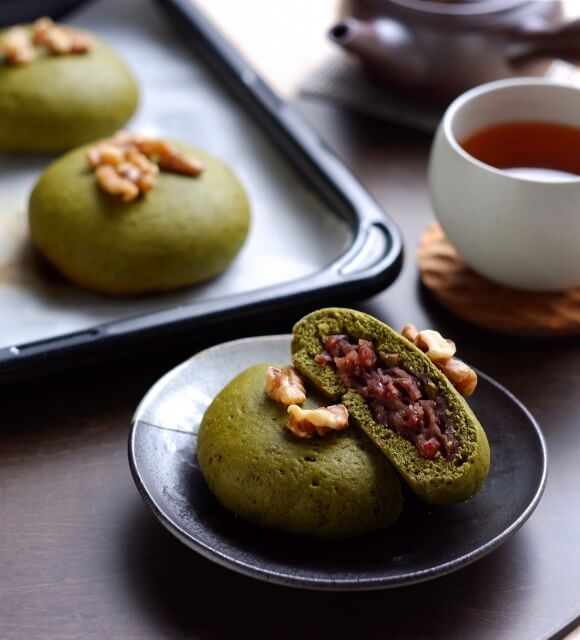 Have you seen this character before?

If you have not, can you figure out what he is made of?

If you do, then you’re one of the many people who have been exposed to the far-reaching popularity of Anpanman. While he is not as well known overseas as much as the Pokemon series, a jolly-looking figure with prominent cheeks and a distinctive red nose could be found everywhere in Japan, mostly in children’s goods. From shirts, to train card cases, socks, and even bike helmets, you could spot this face. It is also said that even children in Japan who have not watched Anpanman will know who he is because of the number of other kids who watch the show and own his character goods.

Anpanman is a superhero that stands out among others because of his ability to break pieces of his head and give it to people to eat to help them. This self-sacrificing and just hero has captured the hearts of many and continues to bring joy to many young’uns throughout Japan.

Anpanman is based on the traditional Japanese sweet roll, anpan, that has a red bean filling. It is most commonly known in the West as the red bean bun.  It is often circular and is sprinkled with toasted black sesame seeds on top.

Anpan was the creation of one called Yasube Kimura, an ex-samurai turned baker in the Meiji period. In the time of extended peace, the samurai as a profession was deemed obsolete, forcing many samurai to find other professions as a livelihood. After passing by a bakery in Yokohama he aspired to become a baker. He then met a baker who worked for a Dutch family in Nagasaki and started making bread with his recipe. Yasube Kimura started a bakery in 1869 named Bun’eido but later he moved his bakery to Ginza and renamed it Kimuraya, a namesake.

Excited to experience Japanese sweets first hand? Discover Sakuraco – a monthly trip across Japan delivered to your door every month!

Kimura realized that bread was not very popular in Japan back in the day because most of the bread that existed was salty, sour, and hard. Kimura then created anpan, aiming to make bread appeal to Japanese sensibilities and taste, with the Japanese wagashi Manju (rice cake filled with red bean paste) as an inspiration. On top of that, instant yeast or even dry yeast did not exist in Japan during that time. After about a year of research, Kimura developed sakadane, a yeast that is unique to Japan. He figured it might work because it is used when making the Japanese saka-manju. Since then, It has become the primary distinctive ingredient in Kimuraya’s sweet roll. Kimuraya’s sakadane anpan was born and now has not only become the primary staple of the shop but it became the red bean bun with moist and soft bread that we know today.

Anpan gained popularity and the attention of the chamberlain of the emperor, Yamaoka Tesshu. Through Tesshu’s recommendation, it was then presented to the Emperor on April 4 1875. The emperor loved it so much that he requested one bun a day. Since then, the titular sweet roll has gained national recognition and immediately captured the hearts of the people as well.9888

Kimura wanted to spread the growing interest of bread and further establish Japanese bread culture. Kimura did not patent the anpan recipe so bakers around the country and the world could create their own version of the anpan. It is not surprising that a version of the anpan could be found in bakeries around Japan.

The varieties of Anpan

Generally, the famous sweet is made out of bread flour, dry yeast, and red bean paste from azuki beans. The bread is generally soft and topped with sesame seeds. The varieties come down to their fillings. Anpan is almost always filled with azuki bean paste, in varying textures. Some are smooth and others are chunky. There are other beans that have been used as fillings: zunda beans (green beans) and white soybeans. Other non-azuki bean paste flavors are pumpkin, chocolate and cream to name a few.

Kimuraya is the forerunner of Japan’s anpan and is still in business. The classic anpan that was presented to the emperor was the Sakadane Sakura which could be enjoyed for 150 yen. The salted sakura gives it a layer of saltiness and sourness which complements and balances  the sweetness of the anpan.

Andesu Matoba is has been around for about 40 years and is known for having 20 types of anpan. Their best-selling anpan is Koshi Anpan, which is anko made from azuki beans from Hokkaido. Other flavors they have is zunda anpan, white bean paste anpan, pumpkin anpan and more!

Mame Ichizu offers a special shaped anpan that is rectangular shaped that has Tokyo station stamped on it. It Is a perfect souvenir if you ever pass by Tokyo station. They also have a thick dorayaki that seems like a bestseller as well.

Anpan is not only rich in history and cultural significance but is absolutely delectable as well. If you find yourself walking in a Japanese bakery, try to spot their version of anpan and taste it!

So, what is your favorite anpan filling and why? Are you a smooth anko or chunky anko type of person? Comment down below and tell us your anpan stories!