A Guide to Dorayaki: The Japanese Red Bean Pancake 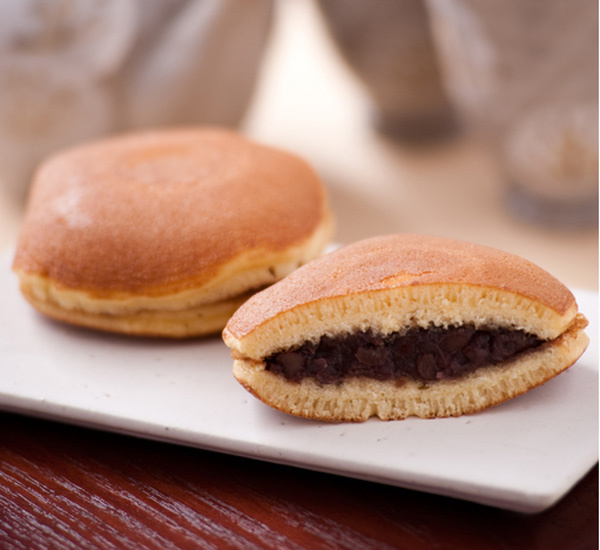 Japanese sweets and confections tend to have a cute hand-held quality to them. Rather than large cakes and pastries, you often see treats that only take a few bites to devour. Famous miniature snacks such as Taiyaki or sweets made from mochi are typical representations of this, but there is one popular Japanese treat where the cuteness factor comes together with “devour-ability” to make a truly pleasurable snacking experience.

I am of course referring to the little golden-brown pancake and sweet bean sandwich known as dorayaki (ど ら 焼 き).

Dorayaki are a Japanese confection made up of two miniature pancake-like patties with sweet azuki bean paste, called anko, nestled inside. We all think we know what a pancake is, but the Japanese version used in the dorayaki is much closer to the Portugeuse “castella” than the standard American pancake in that it is sweeter and fluffier than the latter. However, it is that other ingredient, the anko, that makes this confection a truly traditional Japanese treat.

Experience dorayaki and other traditional Japanese sweets delivered to your door with Sakuraco.

Anko is made from the azuki bean, a naturally sweet red bean that is essential to dozens of Japanese sweets. The beans are most commonly boiled and mashed into a smooth paste and then mixed with liberal amounts of sugar. The end result is paste that constitutes the core flavor for treats as distinct as Tayaki, manjū, various mochi treats, ice creams, and even parfett toppings. When it comes to the popularity of dorayaki, the anko paste could certainly be considered the star of the show.

When you first bite into a dorayaki, your teeth easily cut the soft and fluffy pancake, which is neatly paired with small traces of bean paste on the edges. But as you chomp closer to the center, you get more and more sweet bean flavor mixing with the moist consistency of the pancake. Sweet bean paste is obviously sweet, but there is also a subtle trace of the natural legume flavor which carries a familiar earthy taste, making for a satisfying and unique blend of flavors as you chew the dorayaki into delectable smithereens.

Dorayaki is great on its own, but it definitely goes well with a glass of milk, a Japanese yogurt drink, coffee, green tea, or better yet, a matcha latte.

The dorayaki recipe can be relatively easy if you buy premade anko paste, meaning all you really need to cook are the pancakes.

The batter is made by whipping eggs, sugar, and honey into a fluffy blend and slowly sifting in flour and baking powder until it reaches that familiar pancake batter look. A non-stick frying pan is preheated by turning the heat on low for about 5 min, and lightly oiled with vegetable oil using a paper towel. The oil is then completely wiped up to allow the pancake to acquire the desired golden-brown hue. The cooled batter is poured into the frying pan, which remains on low heat, using 3 Tbsp at a time to create 8cm circles of pancake.

Once the pancakes are cooked, the pre-made red bean paste is then used to make the sandwiches, deliberately putting more paste in the middle of the dorayaki to give it the desired tapered shape. They are then wrapped in plastic wrap until ready to eat.

The History and Culture of Dorayaki

The consumption of Dorayaki, or something similar, is at least as old as the first cultural exchange with Japan and Portugal in the late 1500s when the recipe for castella bread was shared, but the cakes we eat today were first created in their current form in 1914 by a small confectionery shop called “Usagiya” in the Ueno area of Tokyo, which can still be visited today and has since spawned a chain.

The name dorayaki is a mixture of the Japanese word for “gong” (dora) and the word meaning “grilled” (yaki), no doubt inspired by the bronze and round shape of the pancake that does indeed resemble a little gong. Interestingly, there is a Heian period folktale involving the warrior monk, Benkei, where he is fed a small round cake that was grilled on the surface of a gong, giving the whole history of the gong-shaped snack an ancient feeling to it after all.

Dorayaki is a quintessentially Japanese snack. Every kid grows up learning that they are the favorite snack of the popular Doraemon character who uses them as an energy source. The dora in Doraemon actually stands for doraneco, meaning “street cat”, but the similar sounds clearly inspired the writers to add this treat to the story arc. Beyond childrens stories however, the dorayaki can be found in all shapes, sizes, and fillings as the popularity of the treat has only increased over time. There are fancy versions, giant versions, and everything in between. So if you want to get your hands on some of the best dorayaki varieties in Japan, the Sakuraco subscription service is definitely a great way to go.